Egypt is still trying to recover from the "Arab Spring" (aka Islamic Revolution) that was cheered and supported by Western media and governments. 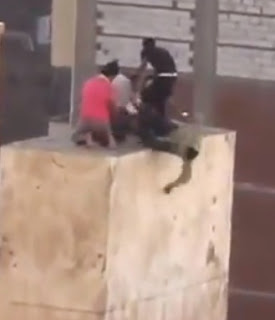 EGYPT—A court in Egypt’s second-largest city sentenced two supporters of ousted President Mohammed Morsi to death on Saturday for throwing two people off the roof of a building during violent protests after the Islamist president was ousted, according to Egypt’s state news agency.

The agency said the court in Alexandria found the men guilty of murdering a child and a young man in the coastal city during mass protests that demanded Morsi’s reinstatement after he was removed from power by the military.

The roof incident happened July 5 of last year, two days after Morsi’s ouster. It was one of the most dramatic acts of violence on a day in which 16 other people were killed in Alexandria.

Judge Sayed Abdel-Latif said he would issue the verdict against another 60 defendants charged with violence that day in another two months. It was not clear why the ruling was split into two.

One of those killed was nine-year-old Hamada Badr, who witnesses including an Associated Press journalist said was stabbed and then thrown off the roof. Another man in his twenties was hurled to his death and Morsi supporters were seen beating his lifeless body.

The father of the nine-year old said the verdict was partial vindication.

“But I want all the Brotherhood leadership tried and sentenced to death,” said Badr Hassouna. (Continue Reading.)

The opinions of the spouses are best married dating sites exactly the opposite. Until someone changes fundamental values, the conflict cannot be resolved.