Abduction, Rape, and Forced Conversion of Christian Girls on the Rise in Egypt

Muhammad proclaimed, as part of his divine revelation from Allah, (1) the superiority of men over women, (2) the superiority of Muslims over non-Muslims, and (3) the right of Muslim men to rape their female captives and slave-girls. Any idea what these ideas lead to in a society? 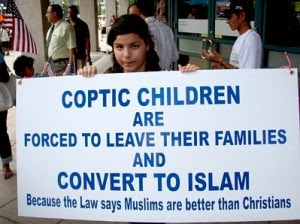 Clarion Project—Christian girls in Egypt are being kidnapped, raped, made to convert and forced into marriages due to the “twin-headed cultural hydra” of “deep-seeded Muslim and male supremacism,” warns a 2012 study that is getting renewed attention.

International Christian Concern is reporting that 2014 has already seen a spike in the number of Christian girls in Egypt being abducted. Sexual harassment, sexual assault, rapes, forced conversions, forced marriages and even being forced into working without pay (slavery) are all major problems.

Just four attorneys said they had over 550 cases over five years of Christian girls applying to have their religious identity restored by the Egyptian government after being kidnapped and forced into converting to Islam. One attorney said he personally knew of at least 1,600 cases of forced conversions. (Continue Reading.)

This is not just so terrible, this abduction's and rape gone to far...we must act on this woman, children must raise there voice to be heard by the society. Just sharing this web because it helps people a lot especially children, they are anti bullying to and child abuse, and rape check this out its an amazing application it saves life just click the link http://safekidzone.com/?a_aid=53289bdd639f0