The Islamic Method of Examining the Textual Preservation of the Quran 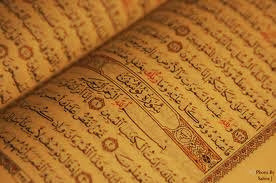 The answer to this riddle is found in Islamic methodology. In short, the Islamic method of examining the textual preservation of the Qur'an is this:


You might think I'm exaggerating, but I'm not. To illustrate, consider a brief conversation I recently had with a Muslim on Facebook.

Muslims were claiming (as usual) that the Qur'an has been perfectly preserved while the Bible has been corrupted. So I brought up a hadith in which Aisha refers to two verses of the Qur'an that were eaten by a sheep. Since these verses are not in the Qur'an today, we know that they were lost. 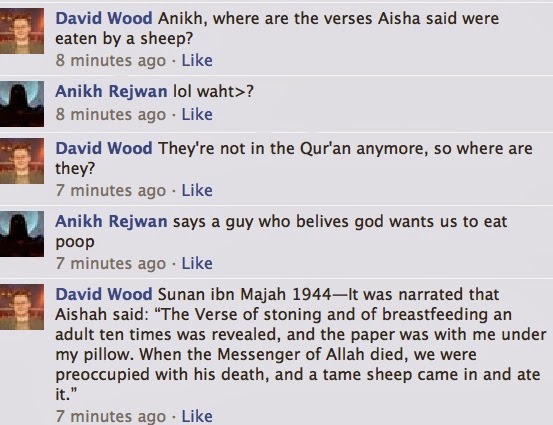 Here we have Aisha herself (the "Mother of the Faithful") saying that two verses of the Qur'an were lost. How will a Muslim respond to the evidence?

There you have it. If something doesn't support the Qur'an, it goes in the toilet. This methodology will surely be confusing to the uninitiated. After all, if we want to learn about the history of the Qur'an, we don't go to the Qur'an itself, but to the Hadith and other sources that discuss the preservation of the Qur'an. But those are the sources that say the Qur'an has been changed, so the evidence goes in the toilet (just as Uthman burned Qur'an manuscripts because of the differences). Anikh will simply reject any evidence that conflicts with the Muslim myth of perfect preservation: 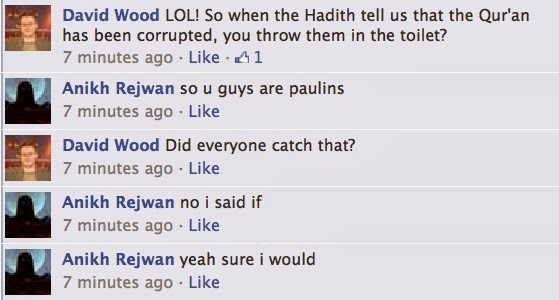 Anikh even confirmed that all Muslims use this method:

Welcome to the wild and wonderful world of Islam. Muslims believe things that are factually and demonstrably false, but they reject any evidence (even evidence from their most trusted sources) that refutes their beliefs. How can a religion that requires its adherents to adopt this methodology possibly be the true religion?

For a brief introduction to the myth of perfect preservation, watch this:

"every uslim goes by this rule"

It's good to know that in a religion with several different sects who consider each other deviants from the true faith and without a central governing body there's at least something all muslims have in common. Sure, it doesn't explain how the hadith David quoted contradicts the quran, nor does it explain to how said hadith was not considered false and discarded by muslim scholars since it apparently it contradicts the quran, but hey, it's refreshing to see a cornered muslim insulting his interlocutor's intelligence instead of outright insulting or threatening him or his family.

Anyway, there's soething i'd like to ask Anikh: if it's quran over hadith, then why is it that under sharia law adulterers are to be stoned? According to the quran (24:2), adulterers are to be punished with 100 lashes. According to several hadiths, the punishment for adulterers is stoning. So, according to Anikh, islamic law should punish adulterers with 100 lashes. Well, there's a hadith that says that stoning was in the quran, but was lost. So, how does that "quran over hadith" works? Isn't it weird how thousands of scholars for over one thousand years managed to screw up such a basic principle?

This is really sad.

Anikh Rejwan is deceiving himself plus it shows their ignorance about the reality in Islamic world!

Hadith is an Islamic source and they use it, and believe in it ...

Please, pray for all Muslims because they are poor ...

Thanks David and Sam for this information

The Muslims keep lining up and you keep knocking them down lol.

Wow... I'm just wondering why muslims heart is sooo hard, that they even reject any truth served to them...

Well , Muslims are try so hard to Help their allah god..... maybe they try to create another allah...?

Could we not use the same argument when Muslims claim the Bible has been corrupted/changed/mistranslated ?