According to the Qur'an, people who reject Islam are "the worst of creatures" (98:6). Not surprisingly, this view of non-Muslims, when combined with Muhammad's call to jihad, has led to endless atrocities in the name of Allah. 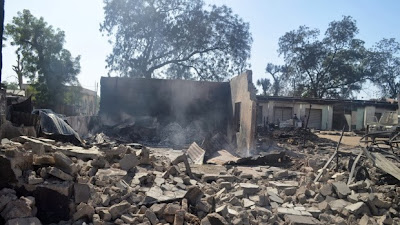 Reuters—Gunmen from Islamist group Boko Haram shot or burned to death 59 pupils in a boarding school in northeast Nigeria overnight, a hospital official and security forces said on Tuesday.

"Some of the students' bodies were burned to ashes," Police Commissioner Sanusi Rufai said of the attack on the Federal Government college of Buni Yadi, a secondary school in Yobe state, near the state's capital city of Damaturu.

Bala Ajiya, an official at the Specialist Hospital Damaturu, told Reuters by phone the death toll had risen to 59.

"Fresh bodies have been brought in. More bodies were discovered in the bush after the students who had escaped with bullet wounds died from their injuries," he said.

Rafai, who had given an earlier estimate of 29 killed, said all those killed were boys. He said the school's 24 buildings, including staff quarters, were completely burned to the ground.

President Goodluck Jonathan called the attack "callous and senseless murder … by deranged terrorists and fanatics who have clearly lost all human morality and descended to bestiality."

The Islamists, whose struggle for an Islamic state in northern Nigeria has killed thousands and made them the biggest threat to security in Africa's top oil producer, are increasingly preying on the civilian population.

Militants from Boko Haram, whose name means "Western education is sinful" in the northern Hausa language, have frequently attacked schools in the past. A similar attack in June in the nearby village of Mamudo left 22 students dead. (Continue Reading.)


For more on jihad, watch this:

Keep doing what you are doing David, people have started listening even in Nigeria.
God bless you.

David wood ,how can i get Hadith on line ? Can u send me a link on wakenge2@gmail.com ?.... i'm debating one Sheikh from Tanzania......I need as much weapons as possible. .... anyway u help so muvh

Understanding is one of the significant elements of our representatives. Understudies don't generally have time education dissertation help to manage job. We attempt to turn into their aides and raise their prosperity. Our directors promise you full obscurity so you can be certain that your own data isn't revealed.

We have on board domain experts who are PhD holders from renowned universities across the globe, and we exclusively offer top notch Law Assignment Help Our experts have tremendous experience in furnishing excellent quality Business Law Assignment Help within the shortest of deadlines. Our Tort Law Assignment Help consistently furnish bespoke and non-plagiarized work that fetch excellent grades too. You save a ton of time to prepare well for your term-end exams by seeking the amazingly affordable Commercial Law Assignment Help.

The assignment seasons are on and troublesome weeks lie ahead. greatassignmenthelper.com is here for your help. The Assignment Helpers and Assignment Help are ready to aid those who need it. I had a fantastic experience working with them, hope you like their work as well. Giving them my assignment was like getting assured of an A+ after my submission.

Fetching excellent grades through time bound deliveries have been the hallmark of Assignment Help at GreatAssignmentHelper.com. Our experts are also known for prompt support and two-way communication with understudies while offering Online Assignment Help round the clock. Sign up for our bespoke Get the best java assignment help online services right away.