The UN sends their latest message to the world: "If you want us to surrender, just throw a tantrum." It's good to see they're so dedicated to freedom of speech. 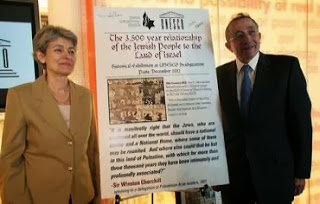 FoxNews—A United Nations agency pulled an exhibit on the Jewish people's "3,500-year relationship" to the land of Israel, after the Arab League lodged a last-minute protest, according to a report.

The exhibit, entitled “People, Book, Land – The 3,500 Year Relationship of the Jewish People and the Land of Israel," was created jointly by the Jewish human rights group the Simon Wiesenthal Center and the United Nations Educational Scientific and Cultural Organization, and was scheduled to open Jan. 20 at UNESCO's Paris headquarters. But less than a week before it was to open, UNESCO informed the SWC is was canceling it because the Arab League had claimed the exhibit “could create potential obstacles related to the peace process in the Middle East,” the U.S.-based Jewish newspaper The Algemeiner reported.

Invitations had already gone out, and the fully prepared exhibition material was already in place, the paper reported. The display was co-sponsored by Israel, Canada and Montenegro. Rabbi Marvin Hier of the Wiesenthal Center, called the move was an “absolute outrage.”

“The Arabs don’t want the world to know that the Jews have a 3,500-year relationship to the Land of Israel,” Hier said. (Continue Reading.)