The churches were firebombed on Christmas morning, yet no one hears about it until days later. I guess news about churches being firebombed just isn't as important as the "Duck Dynasty" controversy. Priorities. 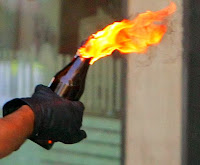 Police and witnesses said the churches on the edge of port city of Mombasa were attacked in the early hours of December 25 after churchgoers held services to usher in Christmas.

Police had no suspects but were exploring the possibility that the attacks may have been launched by Muslim militants or by supporters of the Mombasa Republican Council (MRC), an illegal movement that wants the coastal region to secede from Kenya.

Many Muslims on the Indian Ocean coastline feel marginalised by Kenya's predominantly Christian government and the historically cordial relations between the two communities have suffered strains in recent years.

Police said Muslim youths believed to be controlled by radical preachers with links to Somali militant group al Shabaab might be behind the attacks, which left one church completely destroyed.

"The churches are located in an area mainly inhabited by Muslims, and church members had reported threats before from some youth who told them to close the churches down," said Robert Mureithi, the Likoni area police chief.

Al Shabaab in September raided a shopping mall in Nairobi, killing at least 67 people in the biggest attack on Kenyan soil since al Qaeda bombed the U.S. embassy in the capital in 1998.

A senior Muslim cleric said the arson attack might be part of an attempt by radicals to provoke religious unrest.

"They want Christians to begin a fight with Muslims so that al Shabaab can thrive in Kenya, but am glad Christians are wiser," Sheikh Juma Ngao, head of the Kenya Muslim National Advisory Council, told Reuters. (Continue Reading.)

Email ThisBlogThis!Share to TwitterShare to FacebookShare to Pinterest
Labels: Kenya

But wishing a Christian a merry Christmas is worse then murder.

Radical Moderate..so you are saying that wishing someone peace ,hope and salvation is worse than murder and murder is better? Who teaches you that? muhammad and allah?

RM is referring to a recent video put out by a popular Muslim speaker, claiming that saying "Merry Christmas" is worse than killing someone:

Im surprised it doesnt specifically say in the Quran to firebomb churches, everything else seems to be in there.