Someone named "ItsMe" asked PW if he was going to respond to my article. PW's reply is quite enlightening.

PW is upset that I refuted his attack on the reliability of the Gospel portrayals of Mary without enlisting any help from scholars. After telling someone who goes by the name "ItsMe" that he (PW) was not going to respond to my refutation since it is "silly fundamentalist claptrap," one of PW's supporters, who is audacious and pugnacious enough to call himself "Jesus," and whose level of hatred and vitriol for the true Jesus is equalled only by PW, wrote the following: 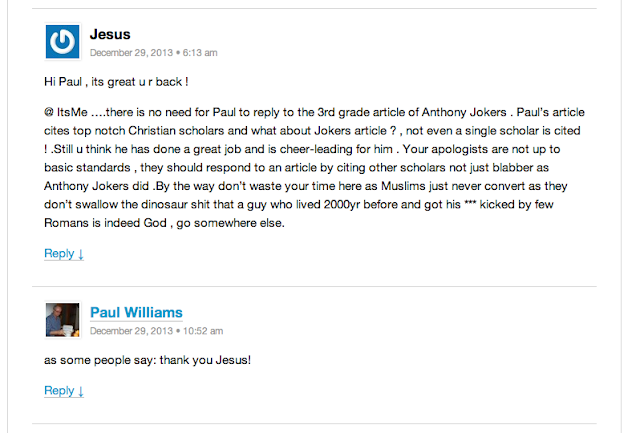 Apparently, since PW can’t lift ten-pound dumbbells without spotters, I am not supposed to do so either.

I pointed out that PW's proffered reasoning for Markan priority and the 2D/Oxford-Hypthesis (as over against the Griesbach-Hypothesis or the Independence view) was logically fallacious and unpersuasive. Paul rejected my appeal TO LOGIC as “silly fundamentalist claptrap.” With such an unwitting admission, this can only be considered a good day for fundamentalists.

PW said that Mark presents a negative view of Mary. This, PW told us, is in stark contrast to the positive picture of Mary found in Matthew and Luke. I cited the primary sources to show that PW was as wrong as wrong could be and that he was engaging in rank eisegesis. Paul rejected my appeal to THE PRIMARY SOURCES and sound EXEGESIS as “silly fundamentalist claptrap.” Once again, Christian fundamentalists should be dancing a jig.

Let me make clear what Paul is telling us here so even his irreverent friend Isa doesn't miss it. PW likes to use “fundamentalist” as a derisive term of embarrassment that applies to people who are intellectually impoverished so he can just dismiss the arguments we make rather than actually having to think through them. But, in effect, by calling my appeal to logic, the primary sources, and sound principles of exegesis “fundamentalist clap-trap” he has tacitly admitted that fundamentalists enjoy an embarrassment of riches. If being a fundamentalist means taking logic, facts, and principles of interpretation seriously, then all Christians should be happy to be part of this "eschatological house," and PW should be embarrassed that he is left standing outside.

Are PW and Isa really not bothered by the fact that they can't read the Gospels or think for themselves without needing liberal masters (or any scholars for that matter) to hold their hands and tell them what to think? (I suppose that is not too far-fetched. After all, they consider themselves so dimwitted and devoid of the natural light that God gives to everyone, that they think they need special verbal revelation to tell them how to go to the bathroom.)  Come on, fellas! Don’t be so pathetic. Take off the training wheels. Ditch the idols.

They have taken [scholars] and [scribes] as lords apart from God and the Messiah, Mary's son… (S. 9:31 – Roger’s Standard Version)

Posted by Anthony Rogers at 5:49 PM

I can see why Islam is so appealing to some. There is no thinking involved no personal responsibility. Everything they do is based on the opinion of one scholar or another. Everything from how to go to the bathroom, to how to eat, to even what to say before they make love to their wife or wives. They can not function at the most basic level with out a opinion for the scholars.

Well only the scholars that they agree with that is.

Good job AR however I think this is still not dumbed down enough for them, they wont be able to understand it.

LOL! You should see Paul Williams screaming at Speaker's Corner in London! He'd make Westboro Baptist Church jealous! But as soon as he's refuted, he retreats to this "I'm a scholar but Christians are just fundamentalists" nonsense!

Hmmm. I feel an ABN series about Paul Williams coming on.

@david
pls do it will be so funny

@David, yes Paul Williams was so scholary when he shouted for over 15 min "Why does your god kill babies, and innocent trees".

BTW do you have video from your POV, I think it would be funny to see him acting so Islamicaly and foaming at the mouth.

I know someone who was recording. Maybe I'll check to see what kind of footage he got of the scholarly Paul Williams.

I asked Paul Williams some simple questions about Islam on his youtube account, and he deleted them.

Liberal scholarship demonstrates that Muhammad is a false prophet who lied about Jesus. PW should accept their conclusions that Jesus died by crucifixion and that what Qur'an says about Jesus is mythology. But why want PW accepts their conclusions? Because he is a fundamentalist Muslim.

PW needs to show the same honesty that he expects from others and admit that modern Bible scholarship is devastating to the validity of Islam. Despite intensive research extending back over two centuries in a quest to discover the historical Jesus, scholars have failed to find Isa the prophet of Islam.

Paul Williams deleted most of my comments including a link to this recent article, and then blocked me lol. Guess he went back into his shell and is waiting till all the big bad fundamentalist Christian meanies go away. Poor Paul

Paul Williams is such a moron I cringe for him! I suppose all muslims suffer from pride and that is their problem.

@rs roudh - I think Isa is the false prophet of Revelation. What do you think?

I remember speaking to Paul Williams for a short period of time. He spent a majority of the time asking me to define basic philosophical terminology. Apparently use of the terms "substance" and "hypostasis" are too complicated for him.

Anyhow, he rejected what I had to say without argument by merely saying that I am speaking nonsense. It's obvious that the man isn't a serious thinker.

I wouldn't be surprised if he spent a majority of his time rewording literature he has read.

Does the logic of 'Jesus' think that Jesus cant be God because he couldnt fight off a few Romans ? Because supposedly God would have pretty decent strength and combat skills ?

Maybe his version of God is something along the lines of He-Man, and to be fair Skeletor did have it handed it to him often.. Although The Skeletor Verses must be somewhat difficult for him to explain away..

An ABN episode or series on Paul Williams sounds like a grand idea. It can be called: A Pseudo-Scholar Defends His Illiterate False Prophet!

Anthony Rogers said, "An ABN episode or series on Paul Williams sounds like a grand idea. It can be called: A Pseudo-Scholar Defends His Illiterate False Prophet!"

The epitome to be sure for a blind man to defend an illiterate false prophet.

PW has been exposed to the truth of himself and the gospel too many times to count and yet will proclaim the truth of a sand pirate of saudi arabia as divine.

On another tangent, muslims tell us we have no right to cite hadith under this ridiculous guise of 'these hadith are studied deeply and analyzed by scholars and it takes many years to analyze this...'.

Abu Bakr was NOT a rocket Scientist.

Umar used plant leaves and sometimes bones as toilet paper just like everyone else.

Muhammad told people to use water from a pond or wadi that had dead animal carcasses, feces and used menstrual cloths.

These men were not geniuses. The sahabah were men of average or below average intelligence, superstitious to a deadly fault who had little exposure to anyone or anything outside the middle east and asia as opposed to the people of today.


Nothing good has come from this ideology and never will. Yet smart people clamor to defend something this stupid..