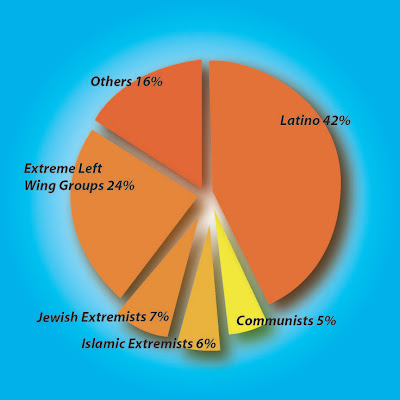 Here's Glen's obliteration of the deception:

Since January, 2010 the Islamic propaganda outlet Loonwatch.com has prominently posted an article with the title "All Terrorists are Muslim… except the 94% that aren’t." Although not saying exactly who it is that believes "all terrorists are Muslim", the gist of the piece is that an FBI report from seven years ago concluded that the vast majority of attacks have nothing to do with Islam.

As Loonwatch puts it:


This would appear to defy common sense. Reports of bombings, shootings, stabbings and even beheadings by terrorists cross the newswire each day. Some are indeed the work of communist groups or nationalists, but the vast majority are clearly the product of Islamic extremists who kill in the name of religion.

Loonwatch is playing a couple of tricks here - the biggest being that they are drawing on domestic data only. In other words, when they say that 94% of terrorists aren't Muslim, they actually mean in the United States, where terror attacks are relatively rare and Muslims make up only 1% of the population.

So, if we ignore the overwhelming bulk of attacks across the globe, Muslims are "only" six times more likely to commit acts of terror than the general population. The numbers for Loonwatch get even worse on closer examination.

As it turns out, much of the FBI list includes "violence" against property rather than people. In fact, the formula used by the agency to define terrorism is somewhat fuzzy. While it includes tree-spiking and bank robbery, for example, it somehow omits the Arizona assassination of a Sunni cleric by Iranian terrorists in 1980, the 1990 murder of Rabbi Kahane by an Islamic radical at a New York hotel, and even the killing of two CIA agents by a Muslim extremist at Langley in 1993.

When Americans hear the word 'terrorism', however, what comes to mind isn't vandalism, but rather those acts of genuine violence that are intended to cause loss of life. So, how do we focus on these incidents and filter out the rest?

Well, perhaps the best way of knowing whether terrorists are serious about killing people is if they actually do. Since Muslims and non-Muslim terrorists have equal opportunity to kill, Loonwatch shouldn’t object to an analysis of only those attacks which cause deaths. What does the data have to say when we exclude non-lethal attacks?

Even by the FBI’s curious standard, the sort of truly violent terrorism that most concerns Americans is extremely rare in the United States. Only 29 attacks on their list of incidents between 1980 and 2005 resulted in actual death. Of these, Islamic extremists were responsible for 24%, accounting for 2,981 kills, while non-Muslim attackers racked up 196.

Thus, what the FBI report is really saying is that a demographic which makes up only 1% of the American population accounts for one-fourth of all deadly terror attacks in the U.S. and 94% of related casualties! (The 94% statistic is somewhat ironic because it is the same figure than Loonwatch is touting to dispel concerns). The Jewish population in the U.S. is more than twice that of Muslims, but there were only three so-called Jewish attacks during the entire 25 years (all by the "Jewish Defense League") with a total of three killed.

Since 2005, there have been at least six additional deadly attacks that would probably qualify as terrorism in the U.S. even to the FBI. One was the 2012 shooting by a skinhead that resulted in six deaths at a Sikh temple and the other five were by Muslims, which left 19 dead. This means that since 1980, Muslims in the U.S. have been 35 times more likely to commit terror than all other demographics combined.

Now, the point of all this isn’t to "prove" that any particular person is dangerous. The numbers are quite low and it is unlikely that the Muslim you know personally is all that different from you, much less plotting mass murder. A person's nominal religion is not grounds for thinking a certain way about them or for reaching conclusions that are based on anything other than their own words or deeds.

What we are demonstrating is how Muslim propaganda groups like Loonwatch and CAIR knowingly manipulate the public into false conclusions about Islam using disingenuous methods. They are also dishonest when they try to confuse people into thinking that criticism of Islamic bigotry means hatred for Muslims.

Taqiyya may be a part of Islamic law, but a noble cause never requires a lie.

Then again... how noble can a religion really be when it's most vocal members are far more concerned about image than the dead and dismembered victims of the devout? (Source)

Oh right because we don't blow up anything.

I wish someone would tell the US military that before they start taxing us and/or rounding us up and taking us to concentration camps.

The Obama Administration prohibited the criminal intent of jihad from being investigated and prosecuted. Law enforcement agencies cannot even use the words jihad and Islam now. That gives jihadists free reign to commit jihad and then claim it was an accident, mental illness, they had no reason to do it, etc., etc., etc., and their true intentions cannot be probed or shown. It also makes the statistics look like there is no Islamic terrorism being committed in the U.S. (because it is not listed as such).

They can paint lairs we dnt care just to let them no that we no who commit does atrocity and them also no who did them, let them cover it up wit paint ,whan the right time comes islam will punish them ,they all son of their father is a deceiver from the begin of the earth

@ajiboya you can also go to google translate, type in your language and then hit english for the translation.

no means negative. know is the word you were trying to use, right?

"Then again... how noble can a religion really be when it's most vocal members are far more concerned about image than the dead and dismembered victims of the devout?"

If you are interested in global statistics on Islamic Terrorism in regards to total global terrorism, just google 2011 NCTC Annual Report. This contains figures compiled by the US Government for the year 2011. You will find that 56% of all attacks and 70% of all fatalities are the result of attacks by Sunni Muslims.