An update on this story.

It isn't often that we receive good news from Saudi Arabia, but today is one of those rare examples of public outrage forcing Muslim leaders to do the right thing.

Fayhan al-Ghamdi is a popular Muslim preacher who discusses Islam regularly on Arab television programs. He's also a rapist and a murderer who brutally raped and tortured his five-year-old daughter Lama to death.

Due to the abominable doctrines of Islamic law laid down by Muhammad, al-Ghamdi was set to be released after agreeing to pay "blood-money" (an amount of money paid to relatives of a victim that blocks further punishment).

Instead of quietly going free, however, al-Ghamdi became the focus of international outrage as human rights groups condemned Saudi law.

In an effort to protect their reputation, the Saudi royal family has intervened in the case, saying now that al-Ghamdi will remain in prison.

Of course, groups like CAIR, ISNA, and their allies will continue to claim that only racist, Islamophobic bigots complain about Sharia. But don't ever forget that critics of Sharia are sometimes the only people willing to stand against the release of a murdering pedophile.

Here's the latest from The Independent. 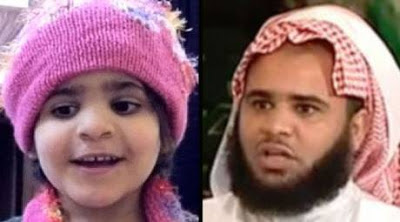 SAUDI ARABIA—The Saudi royal family has intervened to block the release of a ‘celebrity’ preacher accused of raping, torturing and killing his five-year-old daughter.

Fayhan al-Ghamdi was set to be released after agreeing to pay “blood money” to the mother of his daughter Lama, who suffered multiple injuries including a crushed skull, broken back, broken ribs, a broken left arm and extensive bruising and burns. Social workers say she had also been repeatedly raped and burnt.

Al-Ghamdi, who regularly appears on Saudi television, admitted using a cane and cables to inflict the injuries after doubting his five-year-old daughter’s virginity and taking her to a doctor, according to the campaign group Women to Drive.

The case caused a scandal in Saudi Arabia, with public calls for the cleric to be put to death.

Rather than getting the death penalty or receiving a long prison sentence for the crime, Al-Ghamdi served only a few months in jail before a judge ruled the prosecution could only seek ‘blood money’.

Albawaba News reported the judge as saying: “Blood money and the time the defendant had served in prison since Lama's death suffices as punishment.”

Today, however, the Saudi Justice Ministry issued a statement saying the cleric remained in prison and the case was continuing.

The Times reported sources in the Saudi capital Riyadh as saying the royal family had been “stung” by the outrage over the case, with senior members intervening to ensure a stricter punishment is given.

One source told the newspaper, “The royal court is now looking at the case. He [Al-Ghamdi] will stay in prison for a long time.”

The £31,000 blood money Al-Ghamdi agreed to pay is considered compensation under Islamic law, although it is only half the amount that would have been paid had Lama been a boy.

Formal objections to the ruling were initially raised by three Saudi activists, and the twitter hashtag #AnaLama (which translates as I Am Lama) was set up.

In response to the public outrage over the case, Saudi authorities set up a 24-hour hotline to take calls about child abuse.

As a father of six, acts such as this are incomprehensible to me. Hearing about things like this enrages and nauseates me.

I simply do not have much more I can say that would not be said in anger.

He didn't kill her because he was afraid she wasn't a virgin. He killed her either because he was moldering her and went too far or he wanted to be rid of her and it was legal/halal to do it.
So much for Saudi Arabia's so called 'high morals'.
Islam sucks.

This is off topic, but wanted to bring it to everyone's attention.

Ever since when Americans have turned into a nation of pussies?

Molesting the girl, not moldering. iPhone likes to practice it's own jihad.

this is disgusting i think this is the highest level of evil, the suffering that child must have gone through only God knows, but what angers me most is the level of spiritual blindness in Islam that muslims with children will see this and say it has nothing to do with Islam when muhammad also raped, molested and murdered, reading this really broke my heart.

I looked up the video on youtube and some mulims had the nerve to blame it on the Jews unbelievable, why is it when ever Islam is cornered they say its the Jews fault.

poor little girl... she was only 5 years old and went thru all this suffering before she died. Thanks to Islam, full power was given to a sadist over her life. and all his punishment was a little bit of money.

Ah, the perfection of the Muslim man. The irresponsible power, the contempt for the other-- that is, women and children.
Islam is profane.

And whose side is God on?
Certainly not on the side of the father and his male friends and enablers.
Eventually, this child shall sit with Christ and testify against this corrupt society and her relative.