But isn't it bigoted, intolerant, and Islamophobic to expect a Muslim to conform to Western laws? What happened to multiculturalism? 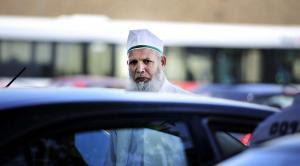 United Kingdom--A religious teacher who was caught on a secret camera kicking and slapping children in a mosque has today been jailed for ten weeks.

Sabir Hussain, 60, admitted four charges of assaulting boys at the Markazi Jamia Mosque, in. Keighley, as they learned The Koran.

He was arrested after secret filming was screened on a Channel 4 documentary earlier this year.

Hussain, of Spencer Street, Keighley, appeared at Bradford Magistrates Court in traditional clothing and was led out of court in handcuffs after the sentence was passed.

He immediately lodged an appeal against his sentence but an application for bail was rejected. (Source)

Oh, yeah. I remember this.

Shabir : "Mashallah, you dare defaming Islam! 100 lashes for you!"

would it be possible for Quran to be religious, political, military doctrine? Inshallah!

I guarantee this is a culture clash. I bet they beat the living crap out of kids in their madrassa schools in Pakystud.

But in civilized western countries, it's illegal.