I'm totally confused. Islam is a religion of peace and tolerance. I know it's a religion of peace, because our leaders and the media keep saying it over and over again. So now I'm stuck trying to figure out why Muslims are persecuting and killing non-Muslims in Egypt, Iraq, Pakistan, Nigeria, Indonesia, and everywhere else Muslims have control over a large area. Don't these Muslims know that Islam is defined by the media, and not by Muhammad's commands?

INDONESIA--A year ago Barack Obama returned to Indonesia, where he lived as a boy, as President of the United States. In a speech at the University of Indonesia, he reminisced about catching dragonflies, flying kites and running through rice paddies in the Jakarta of his youth. "Indonesia is a part of me," he told the audience, while lauding the nation and its people for their new democracy, commitment to the rule of law and tolerance for religious diversity. Obama's affection for Indonesia is understandable. But as he prepares to go to Bali on Nov. 19 for the East Asia Summit, he needs to ditch the nostalgia and deliver a stern message to his onetime home for not living up to its purported ideals.

A key measure of the level of justice and compassion in any society is how it treats its minorities — often its most vulnerable citizens. On that score, Indonesia, the world's most populous Muslim country, is failing. In the past year, public violence against religious minorities, who together make up about 12% of the 240 million population, has been relentless: there has been a slew of incidents, from burnings and bombings of churches to attacks by radical Muslims on moderates. The authorities appear unable or unwilling to firmly intervene.

That seemed to be the case when I was in a packed courtroom outside Jakarta a few months ago. On trial were 12 men charged in connection with a mass assault early this year on members of the peaceful Ahmadiyah sect. Ahmadis believe that their Indian founder Mirza Ghulam Ahmad (1835-1908) was also a prophet, after Muhammad — a claim orthodox Muslims find heretical. This plus other differences have made Ahmadis a target for hard-liners in Pakistan, Bangladesh and, of late, Indonesia too. The attack on the Ahmadis was brutal. A hundreds-strong crowd gathered at opposite ends of a remote rice-farming village on the western edge of Java and converged on an Ahmadi home. The people inside were surrounded and attacked with machetes, sharpened sticks and stones. Three men died; five were badly injured.

At the trial, before the judges entered the chamber, an Islamic cleric in a white robe stepped from the gallery and led the courtroom in prayer. Those inside — plus many more pressed against the outside gate — prayed for the mob, not those killed. People in the crowd told me the Ahmadis had it coming, that the mob was provoked and the violence spontaneous. 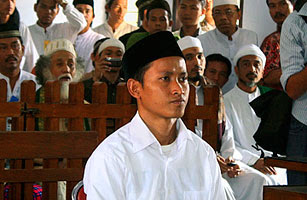 One of the accused, 17-year-old Dani bin Misra, was filmed smashing an Ahmadi man's skull with a rock. He and the other defendants were convicted of "participation in a violent attack that results in casualties." Dani was sentenced to three months' jail. The rest, including two clerics, received five to six months. (By contrast, an Ahmadi got six months for wounding an attacker when defending a family's property.) Said New York City — based Human Rights Watch: "The trial sends the chilling message that attacks on minorities will be treated lightly by the legal system." (Read more.)

one knows Islamic violence is awful when even a liberal mag like Time reports on it accurately.

Is that what the devil's servants are like? Hypnotized creatures who don't know what they are doing and how evil it is?

Can anyone give me a link to a debate between a Muslim and any person of any religion in Islamic country! ...

I think Dubai has hosted a few debates.

Indonesia is my home country,

The main 6 perpetrators of the incident received a cut for jail terms during Idul Fitri (eid el fitr) -Idul Adha and independence day.

In this video there's a tabligh Akbar, or a big gathering of muslims in West Java. FPI is the Indonesian Islamic Defender Front) which was heavily suppressed during the old dictatorship govt of former pres. Soeharto and former pres. Gus Dur.
Notice the word "bunuh" (boonooh) or kill. "perang" (war).
from
1:30 "the former president Gus Dur has allowed the Ahmadiyah to remain because he wants to gain financial support from the western nation such as the great satan America(US)and Iblis /devil UK.

when religious scripture contains "kill commands" such as Quran, no matter how you define it /interpret it /tafsir it, how high your education is, how high morality standard you hold on to,...
doing it will give you a reward, in this case, heaven.

Ahmadiyah mob killing is only a small spot, compared to numerous church bombings, Bali Island bombing I and II, burning alive Christian priest and his family, abducting females to be "brainwashed" and sent to mid-east to give the fighters of Allah earthly wives, etc etc.

When answeringmuslims posted that video, I dunno whether I've to be proud that Indonesia was portrayed in this forum, or to be humiliated since this is Islam in Indonesia.

Indonesia is currently UUD1945 (1945 amandments) which smells like secular, sounds secular, looks secular, but no way muslim call it secular AND already install Sharia in one of the province (Aceh Darussalam)

I can also link you to several Muslim-christian debates here, but you can guess they just test the water rather than swim it directly to the important questions.

Curly, it really isn't so confusing since the chronology of Mohammad's life shows us that the peace was in Mecca (1st 12 yrs of Mohammad's prophetic career) and the violence/intolerance/hatred happened in Medina (the last 10 years of his prophetic career). If Muslims actually follow chronology, then they will have no problems realizing what Islam really is--a disease to humankind--unless their consciences have been seared.

For Islamic view, that is a peace.

I found those videos!

It is in English and in a closed area and it is not broadcasted in Arabic TV ...

Most of the audience were foreigners!

No Arabic Christian man or woman can debate about Islam in Islamic countries ...

The only way right now to discuss Islam is through internet, satellite ...

Arab hackers trying all the time to sabotage those sites ...

Kim: Suppose Sharia law were to be fully implemented as you have stated your aspiration for, what would it say about the Ahmadiyya, practicing their religion?

And what also of anyone apostasising from Islam?

Lastly, according to your understanding of Islam, do you think people like us who are on this blog ought to be killed?