Fifteen Michigan Students in Trouble for Wearing Sweatshirts Glorifying Terrorist Attack (Can You Guess Which Religion They Follow?) 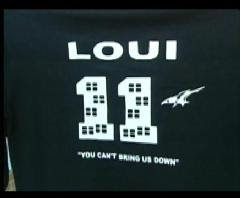 Good old Dearborn. The city with the highest percentage of Muslims in the country. The city where Nabeel, Mary Jo, and I were all assaulted by security for asking a question at a Muslim booth that invited us to ask questions. The city where teachers lose their jobs if they preach Christianity on their own time, outside of school. The city where Muslim students wear sweatshirts glorifying terrorist attacks. Nothing to worry about here, folks. As long as we keep telling ourselves that Islam is a Religion of Peace, and as long as CNN keeps deceiving people about what Islam teaches, we'll all be safe. (Note: Dearborn is only minutes away from Detroit, where a Muslim terrorist tried to bring down a plane on Christmas Day.)

DEARBORN, Mich. -- About 15 Arab-American students at Edsel Ford High School are in trouble over a sweatshirt they had made over the holiday break.

On the back of the sweatshirt, the number 11 is made to look like the World Trade Center Towers. The school's mascot, a thunderbird, is seen flying toward the number.

Under the graphic, a tagline reads, "You can't bring us down."

The students wore the hooded sweatshirts to school Monday. They were immediately sent to the principal's office.

The sweatshirts were confiscated. Read More.

If you're wondering whether these students are in trouble for wearing T-shirts glorifying violence and terrorism, the answer is no. They had to endure a lecture, but nothing else. (After all, it might be considered "Islamophobic" to punish students for promoting terrorism.) As the Detroit News has reported:

It was determined no further disciplinary action will be taken against the students because they did immediately obey the orders to remove the shirts. Read More.

A video discussing the sweatshirt can be viewed here.
Posted by David Wood at 5:03 PM

Email ThisBlogThis!Share to TwitterShare to FacebookShare to Pinterest
Labels: Islam in the News, Terrorism

Well there is some good news in this story. At least there were complaints.

Other then that I bet we will be hearing about a few of these yutes in the comming years.

"Dearborn teens disapeer, go on vacation of life time to such exotic places like Yemen, Afganistan, or the tribal regions of Pakistan."

Anyone care to take that wager.

lol, why does this site dig up the bad apples in our Muslim society?

There are bad apples in every society who love to twist their own scriptures to fit their irrational emotions.

It would be silly for someone to create a christian site, exposing corrupt and bad behaviour from the bad apples of a christian society or a Jewish society.

We all know this is a fact, we know this is the case. Don't you think it says something about the person who claims to understand Islam for over a decade, and knows that these are the bad apples in society, yet spends his life trying to dig out nonsense?


As for Christian apologetics in response to Islam...
Go check out Hamza Andreas Tzortzis, he highlights the Qur'anic challenge. He uses a beloved reverend of yours to close his statement regarding the Qur'an being miraculous in literary form..why not try to debunk Islam by learning Arabic and taking the challenge? Just answer that question, because I guarentee you, if you succeed, the Islamic population will be wiped out. You'd probably gain more converts away from Islam than you are right now in your debates where you dig up points in your presentations which have already been refuted.

Also check out his debates on Islam in western societies. It makes the most sense. Remove the bad apples in the Islamic society (i.e the ones which order for the rape of rape victims - this is a cultural phenomenon obviously, don't try and argue that rape is allowed in Islam, you're wasting your time), then the muslim society will have less corruption rates than in any other state.

I think James White is learning Arabic for the same reason. But of course, you guys are younger than James White, so can have more years of experience.

Are YOU up for the Qur'anic challenge?

I can't speak for 50 cent, but his lifestyle does not reflect any fruit of being born again. It's one thing to believe, but that's only half of it. You must repent and deny yourself and follow Yeshua. If you are truly born again then your lifestyle will reflect it. Sure you will mess up from time to time, but you will not dwell in that sin and strive to commit more sins because you think you are forgiven.

You do not understand the gospel or what it means to be born again. Yeshua himself said unless a man be born again he cannot enter the kingdom of heaven. This is not Pauline theology this is the fruit of the entire gospel message.

I have a question for you. The Koran says Allah sent down the gospel to Jesus. Well the term gospel literally means Good News. So where is the good news in the Jesus of the Koran or the Gospel of the Koran? There is no good news. Jesus failed in his mission and the disciples over came Allah and went out and spread a corrupt message of Jesus's teachings and deceived millions. So where is the good news in this?

I must add this.

"Not everyone who says to Me, 'Lord, Lord,' shall enter the kingdom of heaven, but he who does the will of My Father in heaven. Many will say to Me in that day, 'Lord, Lord, have we not prophesied in Your name, cast out demons in Your name, and done many wonders in Your name?' And then I will declare to them, 'I never knew you; depart from Me, you who practice lawlessness!'"

Many are teaching that calling Jesus Lord guarantees a person a place in heaven, although Jesus here denies it. According to Jesus, many will call Him Lord, and even have supernatural signs of knowledge and power following their lives, who will not even enter heaven. What a sobering thought!

"Are YOU up for the qur'anic challenge?"... sure, after any muslim shows himself to be up to the biblical challenge... are you up to it?