Archaeology and the Deity of Christ: Dispelling a Popular Myth 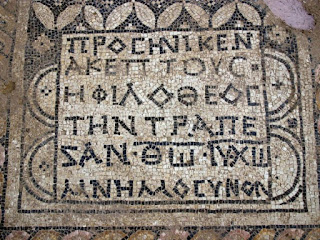 A remarkable discovery was made in 2005 in the Jewish and Samaritan village of Kefar' Othnay in Israel.  An ancient mosaic was discovered dating to about 230 A.D. in what is believed to be an early Christian house church, in fact the earliest recovered church found in Israel. Early Christians met in homes or church houses as the New Testament testifies (Romans 16:5; Colossians 4:15; Philemon 2). It was only later with the conversion of the Roman Emperor Constantine in 312 A.D. do we begin to see the rise of structural buildings called "churches". The inscription on this mosaic reads, "The God-loving Akeptous has offered the table to God Jesus Christ as a memorial'. You can see what is also called Nomina Sacra, the lines above the letters or abbreviations for "God" and IY XW ("Jesus Christ").

In this same house church, they also found another mosaic of fish, an early symbol of Christianity. Early Christians saw the Greek word for fish 'ICTHYS' as an abbreviation for "Jesus Christ, God's Son, Savior". Here is a depiction of the fish in the discovered mosaic:

What is interesting about this discovery is that first, it was found in Israel, the birthplace of Christianity. Secondly, it was found in a Jewish and Samaritan village, which would indicate that there were still Christians among both Jews and Samaritans considering that Jesus told His disciples that they would be His witnesses starting in Jerusalem but also in Samaria (Acts 1:8), where Philip also brought the Gospels to the Samaritan peoples (Acts 8). The third point to be made is that our Muslim friends continue to make and repeat the worn out argument like a mantra that the deity of Christ was invented by Constantine (who is blamed for every problem under the sun) at the Council of Nicea in 325 A.D.  Dan Brown in his fictional book, The Da Vinci Code also argued that Constantine was responsible for inventing the deity of Christ. The major problem with this popular myth is that it is false. Early Christians long before 325 A.D. referred to Jesus as "God" as we see in the early second century Church Father, Ignatius of Antioch (A.D. 50 - A.D. 117). I have placed the relevant words in bold:

"There is only one physician, who is both flesh and spirit, born and unborn, God in man, true life in death, both from Mary and from God, first subject to suffering and then beyond it, Jesus Christ our Lord" (Ignatius, Letter to the Ephesians, 7.2.).

"For our God, Jesus the Christ, was conceived by Mary according to God’s plan, both from the seed of David and of the Holy Spirit" (Ignatius, Letter to the Ephesians, 18.2.).

Moreover, if you note the date of this mosaic, it dates to 230 A.D., that is almost 100 years before the Council of Nicea. So the popular myth that Constantine or the Council of Nicea invented the deity of Christ as anyone can see, is patently false. Here is a case where archaeology has shown what Christians have always known, the Lord Jesus Christ was believed to be God Himself in human flesh, and He was worshiped as such. Notice as well, that this belief in the deity of Christ reflected in this mosaic, was found in the land of Israel, the birthplace of Christianity. The theory that the deity of Christ evolved from Gentile Christianity outside of Jesus' Jewish homeland as some liberal scholars have argued, like Wilhem Bousset (1865-1920) in his book Kyrios Christos ('Lord Christ'), is no longer tenable. Archaeology has confirmed the biblical witness and the testimony of the Early Church regarding the identity of  Jesus. Here is a case where if we remain silent, "the very stones would cry out" (Luke 19:40).
Posted by Tony Costa at 2:56 PM

I agree. Very helpful. The more we can show unbelievers stuff like this the more creditable it has to become. Muslims say we invented this stuff. Pretty tough to do when it originates in the general area where Jesus was.

Thankfully, serious scholarship is still far from believing Constantine invented the deity of Christ. But who knows? There might be a Muslim scholar in the future, and considering how they examine ancient sources...

David K. Bernard wrote an excellent book: “The Glory of God in the Face of Jesus’s Christ: Deification of Jesus in Early Christian Discourse” (Deo Publishing, Dorset, UK, 2016) that clearly shows early Jewish and Gentile Christians used language reserved for God and applied the language to Jesus Christ. Your article adds to the point. Thanks.

I like this blog really! It may look like an easy assignment at first, but wait till you start working on it. Better trust it to our professionals! It takes a lot of time and energy to handle a task like this one. Don't risk your academic future - order a review from kibin jobs platform!