In a post titled "Today is Good Friday," Paul Williams shared a response he gave to someone who quoted the Testimonium Flavianum, which refers to a famous, and much disputed, statement about Jesus in the writings of Flavius Josephus, a first-century Jewish historian and eyewitness to the destruction of Jerusalem. The statement as it currently appears in Josephus is as follows:

"At this time there appeared Jesus, a wise man, if indeed one ought to call him a man. For he was a doer of amazing deeds, a teacher of persons who receive the truth with pleasure. He won over many Jews and many of the Greeks. He was the Messiah. And when Pilate condemned him to the cross, the leading men among us having accused him, those who loved him from the first did not cease to do so. For he appeared to them the third day alive again, the divine prophets having spoken these things and a myriad of other marvels concerning him. And to the present the tribe of Christians, named after this person, has not disappeared." (Ant. 18.3.3)

Here is what Paul Williams said in response:

After making this comment, Williams then cited Bart Ehrman on the reasons why many scholars believe something has been interpolated into what Josephus originally wrote about Jesus: 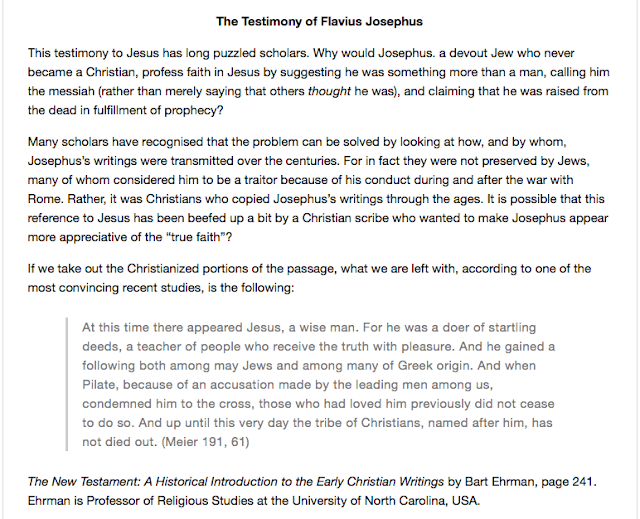 The reasoning offered above by Ehrman, which Williams appealed to, is of no consequence for Christianity; however, the same can't be said for Islam. Just as this reference in Josephus must be seen as a corruption of what he said since he would not have referred to Jesus as "the Christ," so it also shows either that the Qur'an was corrupted or that the author of the Qur'an simply didn't know what he was talking about. According to the Qur'an, Josephus' co-religionists made the following boast:

If, as Ehrman pointed out, Josephus would not have identified Jesus as the Christ, for which reason the Testimonium Flavianum must be seen as a corruption, then it follows that the Qur'an is either wrong when it puts such words in the mouth of the Jews or the Qur'an has been corrupted. QED.

Posted by Anthony Rogers at 9:46 PM

Happy Easter to you all!
Sorry to ask , but is PW still a muslim? I've lost track.
Funny how anything in a document that sounds in any way Christian must be a de facto later interpolation....

Let's assume that this wasn't an interpolation by Christians (which just about every major scholar including Christian scholars does think it was) was difference does it make?

A man born around 37CE who around about activities which Christians claims to have occured around 33CE and the writings were made around 92 or 93CE . They are NOT eye witness accounts . They are not written about an observable event of the character , Jesus. If it were true , all it is , is the stating of a non-christian of what he was observing 60 years after an event he was not a witness to. In a court of law it would not stand up as evidence.

Thank you Anthony. It seems to me that it does not end there. Josephus confirms the crucifixion of Jesus which proves the writer of the koran was a liar or ignoramus.

Why misrepresent what main stream scholars believe .
Only a handful of conservative evangelicals believe this piece to have any element of legitimacy to it.

More importantly , 3 extremely well known scribes who should have written about Jesus didn't , seeing that they were contemporaries to Jesus.

In fact if you do you homework you will realise that Philo , a Jewish philosopher influenced Christianity between 20CE and 30CE .
Philo thought that God created and governed the world through mediators. Logos is the chief among them, the next to God, demiurge of the world. Logos is immaterial, an adequate image of God, his shadow, his firstborn son.[17] Being the mind of the Eternal, Logos is imperishable.[18] He is neither uncreated as God is, nor created as men are, but occupies a middle position. He has no autarkic power, only an entrusted one.[19]--- SOURCE WIKIPEDIA

When you type in the word logos Christianity meaning on Google you get this definition :In Christology, Logos (Greek: Λόγος logos, that is, "word", "discourse" or "reason" i.e., rationality or reasoning) is a name or title of Jesus Christ, seen as the pre-existent Second Person of God according to the doctrine of the Trinity.

It takes more effort to extract what the potential true meaning behind Testimonium Flavianum than it does to see the connection between Philo's writing and the Christian doctrine of who Jesus is.

In the Gospels the Jews call Jesus the King of the Jews since Jews don't believe this then the Gospels must be wrong and these words must been put into the mouths of the Jews. These are not my standard but if you are going to be consistent then you would have to say the same thing about the Gospels.

Nice try, Nazam. I already answered this specious attempt to save the Qur'an in the following post:

A Muslim Dawagandist Refutes the Qur'an

BTW, scroll down to part II for the relevant section.

I do agree with all of the ideas you’ve presented 바카라사이트 in your post.

This is one of the best website I have seen in a 카지노사이트long time thank you so much.

Your blog is really nice. Its sound really 토토good

Thanks for sharing with us this important Content. I feel strongly 바카라사이트about it and really enjoyed learning more about this topic.

I was significantly excited by your internet site. I'll share this message with individuals around me. I will certainly state your web site on my social networks. Thanks significantly for composing a great message. I'm really happy to you. https://lampcasino.com

Your web site really feels a great deal of expert touch. I'm still an amateur, so I wish to talk with a specialist. My writing is still unsatisfactory, yet I desire you to evaluate me by my writing. Please do that for us. 바카라사이트

Hello ! I am the one who writes posts on these topics크레이지슬롯 I would like to write an article based on your article. When can I ask for a review?

The Burn Card in 루비게임 온라인현금바둑이 현금바둑이게임: What Do You Do About It?

Do you like the kind of articles related to casino api If someone asks, they'll say they like related articles like yours. I think the same thing. Related articles are you the best.

What a post I've been looking for! I'm very happy to finally read this post. evolution Thank you very much. Can I refer to your post on my website? Your post touched me a lot and helped me a lot. If you have any questions, please visit my site and read what kind of posts I am posting. I am sure it will be interesting.

Day in the Life of a Japanese 바둑이게임 Worker Pachinko

Thanks for your post. The article is neatly organized with the information I want, so there are many things to refer to. Bookmark this site and visit often in the future. Thanks again.^^ keonhacai

First of all, thank you for your post. 바카라사이트 Your posts are neatly organized with the information I want, so there are plenty of resources to reference. I bookmark this site and will find your posts frequently in the future. Thanks again ^^

"You are so entrancing! I figure I haven't actually examined anything indistinct at this point.
It's remarkable to discover somebody who has an admitted thought on this point.
Genuinely, thank you for beginning this. 토토사이트"

I always think about what is. It seems to be a perfect article that seems to blow away such worries. 안전놀이터 seems to be the best way to show something. When you have time, please write an article about what means!!

Having read this I believed it was really enlightening. I appreciate you spending some time and energy to put this content together. 토토사이트

What’s up, the whole thing is going nicely here and ofcourse every one is sharing information, that’s actually good, keep up writing. 온라인경마

I like the efforts you have put in this, appreciate it for all the great blog posts. 릴게임

Nice information. I’ve bookmarked your site, and I’m adding your RSS feeds to my Google account to get updates instantly. 토토사이트

This informative blog is really interesting. It is a good blog I read some posts I was looking article like these. Thanks for sharing such informative. 온라인바카라

It has fully emerged to crown Singapore's southern shores and undoubtedly placed her on the global map of residential landmarks. I still scored the more points than I ever have in a season for GS. I think you would be hard pressed to find somebody with the same consistency I have had over the years so I am happy with that. 메이저토토사이트

I’m very pleased to discover this site. I want to to thank you for ones time for this particularly wonderful read!! I definitely savored every part of it and i also have you saved as a favorite to see new information on your blog. 메이저토토사이트^