A fifteen year old has been arrested in Philadelphia for plotting to assassinate Pope Francis. Can we talk about Islam yet? 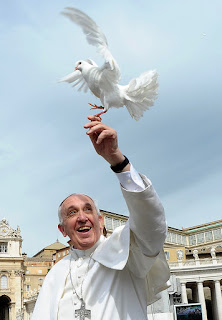 International Business Times—A 15 year-old boy was arrested in Philadelphia for planning an attack on Pope Francis during his upcoming visit to the United States, ABC News reported Tuesday. The boy, whose identity has not yet been revealed, was arrested last month by the FBI after posting about the attack on social media. He was discovered to have multiple firearms in his possession and was allegedly inspired by the Islamic State group.

“The minor was inspired by [ISIS] and sought to conduct a detailed homeland attack which included multiple attackers, firearms and multiple explosives, targeting a foreign dignitary at a high-profile event,” read a joint brief by the FBI and the Department of Homeland Security issued Aug. 14. ABC reported Tuesday that the "foreign dignitary" mentioned in the brief was in fact the pope.

The pope's visit will be the first to the United States since the start of his papacy and is set to be a landmark event, with people traveling from all over the nation to get a glimpse of the leader of the Roman Catholic Church. Authorities have already begun preparing tight security measures in case of an attack. (Source)

Apparently, the pope's defense of Muhammad hasn't stopped jihadists from wanting to kill him:

I remember Churchill's quote saying something about an appeaser and a crocodile. Turns out now the crocodile might not even eat the appeaser last.

The moment a person embraces Islam (s)he becomes irrational. (S)he hears the whispers of Satan to carry out his biddings. He only thinks of the heavenly reward he's told that await him in Janna. I'm not sure what a female Islamic convert hopes to get in the Islamic heaven because nothing seems to be prepared for female Muslims.