As the Obama Administration continues to push its farcical Iran nuclear deal through Congress, Iranian leaders continue to openly proclaim that they will use the deal to annihilate their Western enemies. Feeling safe yet?


Huffington Post UK—For uncensored outbursts, the Twitter feed of Iranian leader Ayatollah Khamenei rivals that of Donald Trump or Katie Hopkins. On Wednesday, the supreme leader’s official account posted a series of missives, including one that said Israel would not survive 25 years.

The tweets followed a speech given at a mosque in Tehran on Wednesday in which Khamenei reiterated America's standing as the “Great Satan,” and that negotiations with Washington would not extend beyond the current nuclear deal. 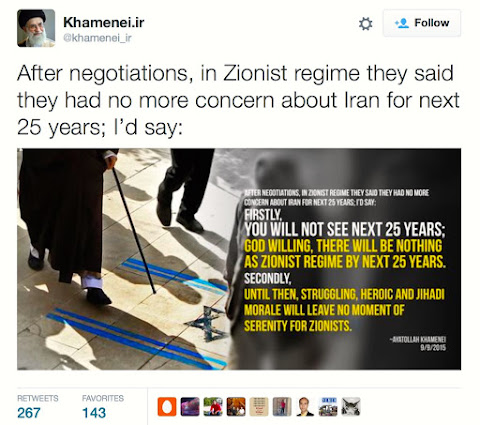 In quotes that appeared on his official website, Khamenei said: “Some Zionists have said that regarding the result of the nuclear deal they (Israelis) have been relieved of concerns about Iran for 25 years. But we tell them that you will not see the coming 25 years and God willing there will not be something named the Zionist regime in the region.”

Wednesday’s outburst is part of a long-standing rhetorical barrage against Israel, with Iran’s Mullahs oft-alluding to an end to the Jewish state. However, Khamenei’s latest rant comes at a delicate time for President Barack Obama, who is trying to pass the Iran nuclear deal through Congress in the face of strident Republican opposition, as well as pushback from some pro-Israel lobby groups.

On the issue of a more permanent rapprochement with Washington, the supreme leader said: “We approved talks with the United States about the nuclear issue specifically. We have not allowed talks with the US in other fields and we will not negotiate with them.”

He added: “The Iranian nation ousted the Satan. We should not let it back through the window,' he said, referring to the 1979 Islamic revolution that toppled the US-backed shah.” (Source)

I have to wonder where Muhammad's insane anti-Semitism came from. Why do so many people hate the Jews?

its not just about israel,, they want all world to be islamic ,, its their religion aim, to be precise, its aim of saudi regime.. thats why islam must not be allowed to spread, but they breed many n marry many, even at poor living standards,, they wont stop breeding n marriages..lol

Hmm.....because nothing says Great Satan better than a nation thats planning to nuke another nation right off the map because they are Jewish. Muhamads goal of slaughtering the Jews lives on through his koran following islamic countries.

Did you ever hear the saying, "Keep your friends close, and your enemies closer"? It's a lot easier to spy on and influence a nation if it isn't an international pariah. I agree that Iran is horrible, but as things stand now, it's hard for outsiders to have any influence. Opening up business to Iran might change attitudes over there, but at the very least, it will make spying on Iran a whole lot easier.

For assisting with planned genocide and the annihilation of all minority religious groups ..the U.S. is found ..guilty.

There are three deceptions at play here, in the people doing the negotiations. One is purely evil, and one is simply empty-headed idiocy.

With Obama (and the other Muslims spread throughout his administration), they know exactly what Iran intends, and know that the agreement is a sham that will allow Iran to get nuclear weapons. The goal of Obama and his fellow Jihadists is the promotion of Islam and Allah above all else, and this agreement is absolute treason, a knowing and planned betrayal of the American public.

The other deception, represented by the vain and empty Kerry, is the same one that Chamberlain fell victim to when dealing with Hitler. Back then, Hitler had written exactly what he intended when he authored Mein Kampf, and no one took it seriously. Chamberlain worked for appeasement, creating useless treaty after useless treaty, claiming great strides toward peace all the while. Hitler, on the other hand, continued to do as he promised, working to eradicate the Jews, planning to starve Russia out of existence, and seeking to dominate the world. It is also noteworthy that Muslims were allies with him, even forming an Islamic SS branch.

Now, we have Kerry, the modern Chamberlain, who is acting with just as much cluelessness when dealing with Iran and all of Islam. He foolishly refuses to believe that they mean what they say, and foolishly accepts the lie that Islam is a religion of peace. He believes that by many words and treaties, peace can be had with an enemy bent on the destruction of all that is not Islam.

The third deception falls in the lap of the politically motivated Congress, where many are blindly following the leadership of their party, working only for personal power and profit. Doing the right thing for the American public is a foreign concept to them, and this includes anyone voting for this agreement. Just as Obama and his administration have acted treasonously, so too have those elected to represent the American public. They have rationalized and lied regarding this agreement, and their only motivation is to side with Obama and to see to their own political futures. These members of Congress are just as evil and treasonous as Obama is, although their treason springs from other motivations.

In summary, we in the U.S. are represented by corrupt and evil officials, and the system itself has become a self-corrupting cancer. Islam is given a free pass, while Christianity and Judaism are persecuted and derided. This corruption is a symptom of the spiralling implosion of the nation, in spiritual, moral, and economic areas. The U.S. has chosen to cast off the one true God, and the public has allowed it, following political correctness over integrity and righteousness. America has no covenant with God such as He has with Israel, and if Israel was judged for such actions as idolatry, child sacrifice, and the other evils that we see today, how much more will the U.S. be worthy of it? Sodom was destroyed for Pride, Fulness of Bread, Idleness, and Neglect of the Poor. Does this not describe America to a tee? Of course it does.

A nation will get the leadership it merits, and this is the leadership that America has gotten. Buckle up, for the ride will likely get very rough, and sooner rather than later.

I dunno about other people it just doesn't make sense to me that the Ayatollah is using Twitter. That's an invention from the "Great Satan" isn't it.

This is the deranged mullah who wrote advice in his book about muslims having sex with babies. "A man can have sexual pleasure from a child as young as a baby. However, he should not penetrate vaginally, but sodomising the child is acceptable. If a man does penetrate and damage the child then, he should be responsible for her subsistence all her life...."

This is the psychotic mullah who calls America "The Great Satan"?? If Iranians knew how greedy and corrupt their mullah was I am sure there would be another revolution to try to get the country back to normal. It's more than a case of the kettle calling the pot black.

They WILL NEVER DESTROY ISRAEL they Will get close but then GOD is guna come and deal with em!!!! Hey tho WE GOTA PRAY LOADS FOR ISRAEL AND THE JEWS!!!! LOADS FOR THE PERSECUTED CHURCH.....AND HELP IN AS AS MANY WAYS AS WE CAN!!!!! I GOTA GOTA PRAY LOADS MORES FOR PEOPLE WHO VERY SADLY DON`T KNOW JESUS YET TOO!!!!!!! MUSLIMS BUT NOT ONLY MUSLIMS : SHIEKS HINDUS ATHEISTS BUDDISTS ETC ETC ETC

George S.: "If Iranians knew how greedy and corrupt their mullah was I am sure there would be another revolution to try to get the country back to normal."

Love your quote. To expand on it..."If only Muslims know what kind of person Muhammad truly is."

You also forgot for the widespread acceptance of homosexuality and rape.