The most successful fighters against ISIS so far have been the Kurds. However, as ISIS seizes more and more U.S.-made weapons and vehicles from the retreating Iraqi military, the Kurds are rapidly becoming outgunned. Some Arab states have tried to send upgraded weapons to the Kurds, but the Obama Administration is blocking all attempts to directly arm them. The U.S. and U.K. governments insist that all weapons be sent to Baghdad, to be controlled by the Iraqi military, which has repeatedly retreated and left weapons and supplies behind for jihadists.

See if you can get your minds around this. The Obama Administration won't allow other countries to arm the people who will never surrender to ISIS, and instead demands that weapons be sent to a group that ultimately gives weapons to ISIS. 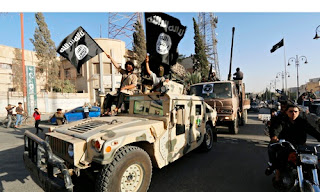 Fox News—The U.S. has reportedly blocked any attempts by Middle East allies to fly weapons to the Kurds fighting the Islamic State in Iraq.

The Telegraph reports that U.S. allies say President Obama and other Western leaders, including Britain’s David Cameron, aren’t showing leadership over the escalating ISIS crisis in Iraq, Syria and throughout the Middle East.

These allies are now willing to “go it alone” in giving heavy weaponry to the Kurds, even if it means defying Iraq and the U.S. who want all weapons to be funneled through Baghdad, according to the newspaper.

High level officials from Gulf and other states have told The Telegraph that plans to persuade Obama to arm the Kurds directly have failed. The Senate voted down an amendment for the U.S. to bypass Baghdad and send weapons to the Kurdish fighters.

The officials told the paper they are looking for ways to bypass U.S. permission to give the Kurdish fighters weapons.

“If the Americans and the West are not prepared to do anything serious about defeating ISIL, then we will have to find new ways of dealing with the threat,” a senior Arab government official told The Telegraph. “With ISIL making ground all the time we simply cannot afford to wait for Washington to wake up to the enormity of the threat we face.”

The Peshmerga have gotten support from the Kurds to drive the Islamic State back from Erbil. However, they are doing so with makeshift weapons. The Telegraph says weapons have been bought by a number of countries throughout Europe to aid the Kurds, but U.S. commanders are blocking the arms transfers.

The Kurds also have said that the main part of their plight is that Iraqi forces have abandoned so many weapons in the face of ISIS’ attacks, they are now fighting American-made weaponry with Soviet-style equipment. (Continue Reading.)

Given the utter incompetence of our current leaders, I think we need to look to the future of Western leadership. Here's a pop quiz for future leaders.

I like how gay marriage is & has been the thing people have been more worried about here in the US. If rights are so important to those guys, why don't they also care when others have theirs revoked by such a despotic entity as ISIS?

God bless the Kurds. May they have the victory.

Disgusting. So Iraq wants all weapons funnled through them so they can run away and give those weapons to ISIS, yet the only group that is fighting ISIS we wont' give them weapons because the Iraqi's and I would say even the Turks don't want them to have it. That whole region just needs one big giant RE BOOT and DO OVER.

Amen to that King Harkinian II. I stand with you in this prayer!!

Perhaps someone should write to ex-President Bill Clinton and ask him if he remembers what happened to Rwandans when his government vetoed a UN decision to stop the massacre, or even help them defend themselves. A decision, he is on record as saying, he will regret his whole life. A decision, however, that Hilary seems to have forgotten.

Perhaps the cries of the 800,000 Rwandans who died because the West refused to intervene or help, even though they knew what was happening and had the power to do so, should reach into the White House again, and hope this time to be heard on behalf of the Kurdish people.

Or perhaps, the President is too busy storing away all that social collateral he's won after lighting up his house in a rainbow flag. The first time the White House has ever been illuminated by any flag, happened when 5 judges, not elected by the people or even a party, decided what their entire nation had to believe about marriage. (There are no winners when democracy itself dies.)

As some Americans surround themselves with rainbows and talk about their government granting dignity to people (giving power to a government it should not have), the Kurds are surrounded by bloodshed and ask for Western governments to grant them a right to live.

I'm not surprise of his behavior!
AS PRESIDENT OF THE UNITED STATES, BARACK OBAMA’S ACTIONS HAVE DONE:
- Threatened The Constitution Of America
- Weakened America’s Defenses
- Encourage, Armed, Help And Funded Our Enemies In The Middle-East
- Irritated Our Closest Allies
- Moved Us Towards Socialism
- Increased Our Budget Deficit
- Increased Our National Debt
- Weakened Our Economy
- Trivialized The War On Terror
- Failed To Meet All His Promises
- “Obama’s serial scandals, all prefaced by lies – Fast and Furious, Benghazi, NSA, IRS” among others.
- And Many More…..

OBAMA ADMITS THAT HE IS A MUSLIM:
I suggest you watching this montage of all interviews where OBAMA Admits That HE Is A Muslim:
- OBAMA Bowing before a Muslim King.
- OBAMA Talking about his Muslim family.
- OBAMA Quoting from the Koran.
- OBAMA Defending Islam.
- OBAMA Brother Malik is a Muslim who has affiliation with Hamas, Terrorist Group
- OBAMA was enrolled as a Muslim in a Besuki Primary Public School in Jakarta, Indonesia.
- OBAMA Inviting A Terrorist Group In The White House Known As The Muslim Brotherhood, Muhammad Morsi Who Committed Many Atrocities and was sentenced to Death...
- OBAMA Funding Billions Of Dollars To Muslim Countries...
- OBAMA Distributing Deadly Weapons To Jihadist Muslims & Groups Who End Up Fighting Against Us!
- OBAMA Refusing To Call "Muslims Who Commits Terrorist Attacks In US" As "ISLAMIC TERRORISM" But Instead Label It As: "Work Place Violence".

- OBAMA visiting Mosques. And Many More Clips of Obama and his Muslim Connections.

+ The Video Below speaks for itself!
LINK: http://youtu.be/tCAffMSWSzY

While Islam Is At “WAR” Against The United States And The Rest Of The World, Obama Reminds Us That:

Among The Offenses Documented:

● How Obama Care is not only unconstitutional but illegally bypasses Congress, infringes on states’ rights, and marks an unprecedented and unauthorized expansion of IRS power.

● How the Obama administration recklessly endangered the public by releasing from prison criminal illegal aliens at a rate far beyond what is publicly known.

● The president’s personal role in the September 11, 2012 Benghazi attacks, with new evidence about what was transpiring at the U.S. mission prior to the assaults – possibly impeachable activities in and of themselves.

● From “fusion centers” to drones to alarming Department of Homeland Security power grabs, how U.S. citizens are fast arriving at the stage of living under a virtual surveillance regime.

● How Obama has weakened America both domestically and abroad by emboldening our enemies, tacitly supporting a Muslim Brotherhood revolution, spurning our allies, and minimizing the threat of Islamic fundamentalism.

David was brilliant as usual. What is very frightening is how most American people cannot see the ineptness of our President, and how he does the opposite of “smart choice.”

Nothing surprises me with Obama these days. The presidential election can't come soon enough.

Keith, I wouldn't put much hope in the next election. Obama winning two terms as president shows that something is very wrong with the US electorate, and that's even after taking into account the scattered allegations of election fraud and voter intimidation.

Despite Hillary's corruption and policy failures, she'll probably be the next president. And if she isn't? I don't know if it would make such a difference. There are very few top Republicans who really act on traditional principles and talk forthrightly, in other words, top Republicans who are respectable, and not mere opportunists.

I will be delighted, of course, if I'm proven wrong in all this.

DT is running and while I'm not sure how he would do in other areas, but boldly telling the truth against Islam is something to respect.

David Wood: brilliant as ever, but you are more generous to the Obamas and their ilk, and, even though brought up a Catholic, I include the present Pope in that gaggle of dangerous collaborators. (I actually think that the Islam-Schmusers, Obama and Pope Francis, came in on the same bus). I dont give them the benefit of the doubt any longer - they are not stupid, so what could be their motivation? I'm reminded yet again of this quote (the source of which I have forgotten):

"Given the utter incompetence of our current leaders"

The prior post says it better: IMO, much of the seeming-incompetence is deliberate maliciousness on the part of Muslims having positions of power & influence in the Executive Branch. Only prayer + God answering the prayers will fix things. We are in serious trouble.