Muhammad allowed his followers to rape their female captives. Fourteen centuries later, Muslims in the UK have raped so many young British girls, the government can't even punish the rapists. As Deputy Children’s Commissioner Sue Berelowitz reports, the British government would need to build prisons endlessly to house the pedophiles, and there may not be enough land to build them. 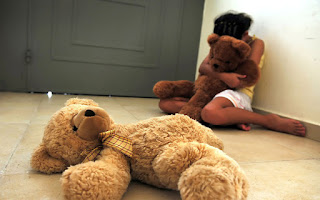 Telegraph—Child sex abuse is so rife in Britain that there is not enough land in the country to build the number of prisons needed to house the perpetrators, the Deputy Children’s Commissioner for England has warned.

Sue Berelowitz, who is currently chairing the government’s inquiry into the problem said the public would be shocked by the sheer scale of the problem when she reports in November.

She blamed the spread of pornography through the internet and social media for the growing problem of an increasingly sexualised society.

Speaking at the Hay Festival, Mrs Berelowitz said: “We live in a highly sexualised world in which for the most part it is considered quite acceptable to do as they want with females, and too many females think that is something they must comply with because they think it is a part of growing up

“I want us to keep in mind that people who sexually abuse children are somehow another breed. They are here and in our midst.

“There certainly needs to be much more awareness to bring it into the public’s consciousness. The figures when I report in November are going to be very shocking indeed.

“If the CPS were to prosecute everyone we would need a rolling prison programme. I would say there probably isn’t the land to build enough prisons."

Mrs Berelowitz’s report comes in the wake of abuse scandals in areas including Rotherham, where it was reported that 1,400 children were abused between 1997 and 2013.

A previous inquiry into sex abuse by gangs revealed that from August 2010 to October 2011 at least 2,409 children were sexually exploited by gangs and groups across England. (Continue Reading.)

To understand the rape epidemic in Great Britain, watch this:

Maybe we need a British edition of To Catch a Predator.

Mrs Berelowitz said: “We live in a highly sexualized world in which for the most part it is considered quite acceptable to do as they want with females, and too many females think that is something they must comply with because they think it is a part of growing up”- The Telegraph

Peoples are encouraged to sexualize UK society by importing Islamic culture from Muslim immigrants as well as rejecting teaching of Christ on marriage between one man and one woman until death separate.

Muslim prophet Muhammad who had 12 wives age ranged from as high as 40 (Khadijah) and as low as 6 six years old girl (Aaishah). If Satan’s laws (Sharia) are considered as divine what could society expect from satanic law?

Also, maybe it's time we brought back more aggressive forms of punishment, like castration. Jailtime seems to cause more problems than it solves anyway.

I believe chemical castration for repeat offenders is still practiced in most parts of the Western world, including the UK.

This is a crime against God and His plan for all humanity as Jesus tells us to come to Him as a little child. This crime is Satan's attempt at standing in the path of that plan being fulfilled. It is the most heinous of crimes.

We have already been told that the punishment for it is something far, far worse than being thrown into the deepest part of the sea (ie. a place where there is no hope of redemption) with a millstone around our neck (a sign of shame and death). In the day of that punishment, those offenders who have not sought God's forgiveness and healing, will wish for this as a better alternative to what they will face. Every single child will be defended by God, as they should be by us as well.

Chemical castration can be reversed. Most of the time it only works for as long as you take the drug(s), but once you stop, its effects disappear. I'm talking actual surgical removal of important parts; because their owners violated the sexual rights of others, they deserve to have their own taken away.

Chem. castration should be a first resort, however. I'm not saying if a dude is found guilty of one child sex count then he should lose his ability to sew seed. It's if after his sentence of CC has ended and he's right back at it that he should have his lower brain removed.

This isn't so much to punish or shame the criminal as it is to protect society from that criminal. Maybe we should lace "food donations" with the stuff and send it to ISIS...