Muhammad had sex with a nine-year-old girl, and he allowed his followers to rape their female captives. We've seen the horrifying results of Muhammad's example and teachings in Great Britain (not to mention in Iraq, Syria, and Nigeria). Now we're seeing the results in the U.S.

Ahmad Saleem is the Orlando Regional Director of the Council on American-Islamic Relations (CAIR). He attended the University of Central Florida, where he was President of the Muslim Students Association. He later became the MSA National Service Director before founding the Saleem Academy. Here's his description on the Saleem Academy's site (deleted following his arrest on pedophilia charges):


Ahmad Saleem is a passionate community organizer and educator based in the sunny city of Orlando, FL.

When he was in high school, he went through a lot of inner struggles, a big part of which were sparked due to a deep identity crisis that was partially sparked by the islamophobic climate in America post-911.

Through the grace of The Most Generous and through many patient years of soul-searching, Ahmad not only was pulled out of those dark days of his life, but also transformed and was trained and blossomed into a promising community leader, activist, and teacher.

Pakistani by origin, yet raised in America, he currently holds his Bachelors in Psychology, and has studied under scholars like Imam Tariq Rasheed, Sh. Abdullah Deeb, Sh. Ahmed Harara, Sh. Ibrahim Habash, Mufti Minhajuddin Ahmed, Mufti Ehzaz Ajmeri, Mufti Azeemuddin, Molana Noorudeen Ghauri, Molana Ihtiram, Sh Uthman Khan, & Qari Mohammed Fazl-ur-Rehman Ahsan Nadwi. He has partaken in Zaytuna, Almaghrib, and Bayyinah educational services as well as conducted his own seminars and teachings too. He looks up to Malcolm X and Shaykh Hamza Yusuf in the West and Salahudeen Ayubi and A’llamah Muhammad Iqbal in the East as role models.

He has dedicated his life to God and to empowering others to God through God, and for Saleem Academy that translates into him and his team empowering Muslim Youth across the globe. Please pray for his success and the success of all the community servants of God around the world. 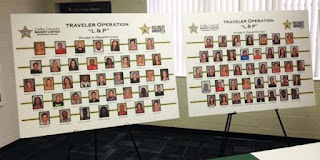 Orlando Sentinel—Orlando community activist Ahmad Saleem drove to a Clermont-area house intending to meet a 12-year-old girl he had been chatting with online for sex in a vehicle with a specialty "Invest in Children" license plate, authorities said Tuesday.

But when the door opened, there were no children in sight. Instead, detectives quickly brought Saleem to the ground and arrested him. Saleem, founder of the Saleem Academy, an organization dedicated to empowering Muslim youths globally, was one of the 101 people arrested in an undercover cybercrime prostitution and child-sex sting by the Lake and Polk county sheriff's offices.

Lake County Sheriff Gary Borders and Polk County Sheriff Grady Judd spelled out details of the two-week sting, which started on May 18, at a Tavares news conference surrounded by large boards filled with suspects' mug shots. Seventy-nine people were busted in the prostitution operation and 22 in the child-sex sting, officials said.

"Central Florida is now a safer place today because of the efforts of our deputies," Borders said.

He said the operation — dubbed "L & P" for "Lake" and "Polk" — used chat rooms and online forums to identify people seeking illicit sex. The first phase targeted people looking to have sex with minors from 10 to 14. Among those arrested was Saleem, 22, who faces felony charges for traveling to seduce or solicit a child to commit a sex act.

A Polk County sheriff's detective posed as a girl online and talked with Saleem, who said he wanted to have sex with the girl and then traveled to Lake County for an expected meeting, authorities said.

Saleem was also the Orlando regional coordinator for the Council on American-Islamic Relations, a nonprofit organization dedicated to challenging stereotypes of Islam and Muslims and defending civil liberties. The organization said he only worked there for a short time before abandoning his post. (Continue Reading.)

Notice that CAIR officials are trying to distance themselves from Saleem by claiming that he is no longer Orlando Regional Coordinator. These officials apparently think that by taking down Saleem's page from their site, they can trick us into believing that Saleem "only worked there for a short time before abandoning his post." However, a little detective work reveals the truth.

A simple Google search shows that Saleem is still listed in search engines as a CAIR representative:

Even worse, Google archived the site only three days ago:

Look who was listed only three days ago as CAIR's Orlando representative: 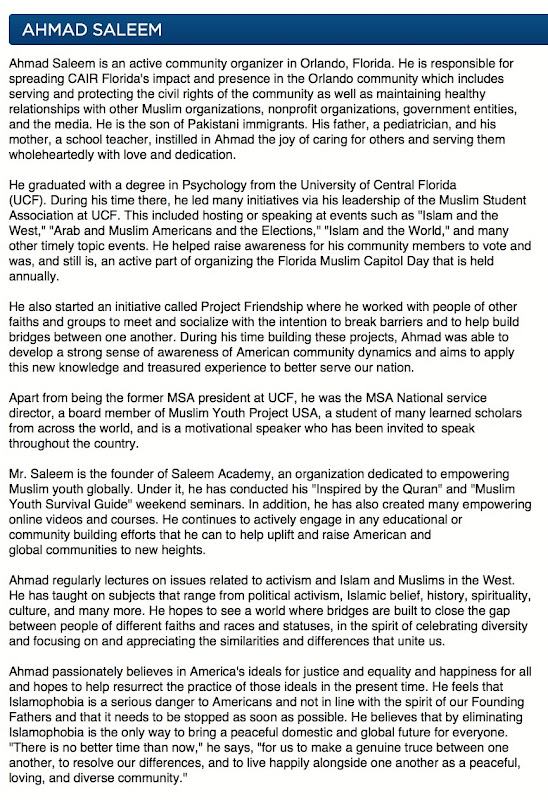 Since the sting began on May 18th, and Saleem was part of the "phase one" arrests, he had obviously already been arrested when he was still listed as a CAIR representative on May 31st.

Nice try, CAIR. But instead of lying in an effort to protect your reputation, perhaps you should focus on dealing with Islam's depraved teachings about non-Muslim girls. In fact, I'd like to see you even address Muhammad's teachings about Muslim girls:

There are some who defend Muhammad's marriage to Aisha as "culturally acceptable" in 7th century Arabia. Have you ever addressed that claim in one of your articles?

Give the guy a break; it's sunnah, persuing little girls and sexually victimizing them. Muhammed did it, so all Muslim men have license to do it themselves.

@Mari Kaimo: As I recall, they have an article that covers that issue, along with many others:
http://www.answeringmuslims.com/2013/10/was-muhammad-pedophile.html

I hear Chris Hansen will be on patrol for more Internet pedos & ephebos in a new show called Hansen vs. Predator. Maybe we need that; I imagine a startling number of the men caught will be Muslims, and it'll show just how widespread this problem is, hopefully forcing people to examine the Islamic literature to see how these men get it in their heads that it's okay to find minors with whom to have sex. As I recall, they even caught a couple Muslims on the original show...

Actually King, Hanson had a show about catching pedophiles back in early 2000's and a surprising number of the men actually were muslims

There were 101 swept up in that sting, but only Muslims do this while hoisting up their banner of religion. To think they feel the moral superiority to rule every country, is beyond nauseating; it's criminal for our elected officials to mollify this depraved and destructive cult of genital worship.

We are becoming a planet of imbeciles, ripe for Islamic subjection!

I think I'm going to throw up.

Detective of Polk County used Islamic trick to catch a Muslim leader (CAIR) red handed. It is “Like Father, like son”. Muhamad by his black magic surah made believe Muslims that lust for sexual urge as Muhammad had, such as sex with minor child, rape, adultery etc. are legal to eyes of their Allah. As such Muslim women are punished for adultery not the men. Child marriage is common in Pakistan. At age 53 Muhammad married a 6 six year old girl. What could we expect from Muslim when their spiritual leader Muhammad showed the path of child sex?

Like the guy in New York who was groping 28 victims...he was only looking for a wife.

Linked at my site.

Pedophile Muslim soliciting a 12 Years old girl kind of sound like his prophet's behavior!
Narrated by Hisham’s father:
Khadija died three years before the Prophet departed to Medina. He stayed there for two years or so and then he married ‘AISHA WHEN SHE WAS A GIRL OF SIX YEARS OF AGE, and he consumed that marriage when SHE WAS NINE YEARS OLD.
Sahih Al-Bukhari Volume: 5 Hadith Number: 236

The Hadith give us a good insight of the life of Muhammad in the 7th century and it is not pretty!

It would not be illegal in Pakistan. In case after case of kidnap and rape of non-Muslim girls - the law in Pakistan for the most part stands well back.

There was a young Hindu girl kidnapped and taken to a 'mosque' - where it was claimed she married her abductor and 'converted' to Islam. When her distraught parents demanded action - they were told by Pakistani police - that they do not interfere in 'matters of religion'.

There was another case some years ago - where two 11 and 12 year old Christian girls were kidnapped. What would be normal in western society - you know where the girls have been taken - and you go and get them. Not so simple for non-Muslims kidnap victims in Pakistan - the girls' parents had to go to court to get the kidnapper to release the children - who claimed the girls had converted to Islam [and as I remember - had been married!].

This has ~ Say what ~ written all over it!

One could say that kidnap and rape of non-Muslim girls - is more often than not - carried out with impunity - in Pakistan.

What is true is that the non-Muslim religious status of these girls - is always a factor.

If you look at Egypt - the same pattern of abduction and sexual crimes against Coptic girls and women exists. Where the local police have been known to play a part in abductions - particularly in cases where parents are made to forcibly sign under age girls over to their abductors - in police stations. And further the arrests of family members who attempt to recover abducted love ones taken by Muslim Egyptians.

We are now seeing the open display of abductions non-Muslim women and girls and their sexual enslavement in the Islamic State.

In the UK - some of these Muslim sex predators - have tried to get the underage girls interested in Islam. An indication - that there is no contradiction.