Muslims make up a little over 10% of the population of Kenya. Yet the citizens of Kenya are victims of regular Islamic terrorist attacks. Can we talk about Islam yet? 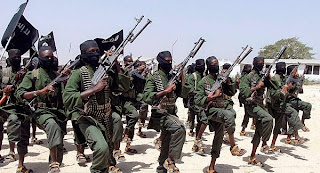 NAIROBI, Kenya-Al Shabab gunmen killed around 25 Kenyan police on Monday, ambushing some officers in a village in the east of the country after others died when their vehicle hit a landmine planted by the militants, their military spokesman said.

"We took all their weapons. There were some Kenyan forces that escaped in the course of the ambush fighting," he said.

Some 20 police died in the ambush, which occurred in Monday evening in Yumbis village, 45 miles north of the town of Garissa, the Standard and Daily Nation newspapers said.

Last week, al Shabab attacked Yumbis and hoisted their flag on a mosque where they held prayers before heading to another nearby village.

Police spokesman Masoud Mwinyi confirmed there had been an attack in Yumbis. Other government officials could not immediately be reached for comment.

Al Shabab, which has carried out several attacks in Kenya in recent years to try to force Nairobi to withdraw its troops from Somalia, attacked a university in the same area last month and killed 148 people. (Continue Reading.)