Thanks to Muhammad's teachings, there are places where British women can't get into a cab without seeing a Muslim man who has raped them. One victim reports: "All the taxi drivers in my city are members of the Muslim rape gangs." British police still refuse to deal with the problem, for fear of being labeled "Islamophobes."

Notice that CAIR is working towards the same goal in the U.S. By manipulating people into being terrified of ever questioning Islam, CAIR is setting the stage for future abuse. 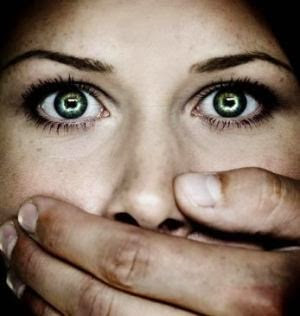 Pamela Geller—After awhile, the worst thing was not what happened for me – as horrifying as it was, I got used to it. What was worst for me was seeing the other girls they did this to. I was used to it, but they weren’t.

The Muslim gangs preyed on orphan girls who lived at a children’s home. These girls were 12 years old and even younger than that.

They would come and get me and I would go – I didn’t know what else I could do, I was frightened. They would show up in two cars, and often pick up other girls from the youth home.

One night, some of the girls from the children’s home and I were taken to a car park at one o’clock in the morning. Twenty Muslim men were waiting for us there. One of the girls from the home started crying, saying it was late and she had to get back to the youth home. One of the Muslims came over and slapped her hard in the face and told her they would decide when she went home, she wouldn’t, and that she better shut up.

And so you learned to be quiet and just go along.

Eventually that youth home got shut down: A whistleblower got sick of the cover-up that was going on there. The manager of the home, instead of reporting what was going on to the police, was giving the girls pills to keep them calm and docile.

Now some of these girls are suing the police through legal aid. I still see some of them around. I saw one of them in April, not long after I arrived back in the country. I had fled Britain after I ran into one of the Muslim gang members, and he started to ask me about my preteen daughter.

I thought then that the only way I could keep my daughter safe was to leave the country. But when I came to the country where I had hoped to settle, the authorities told me that I couldn’t stay there. They wouldn’t give me protection because I was English and white; they wouldn’t offer me refugee status or any of the protection they give to Muslims who say they’re fleeing war zones.

So after seven months there, I had to return to Britain. Now whenever I have to go to the city center, I wear a hoodie. All the taxi drivers in my city are members of the Muslim rape gangs. I change my hair color frequently and do everything I can to try to keep them from recognizing me.

I remember once I was in a taxi and the driver started speaking to me about a very young girl I knew. She was only 11 or 12 years old. He started telling me all the terrible things he had done to her. He said he took her to a hotel, used her all night, and then let her go at 4 o’clock in the morning.

That was the man who started asking about my daughter. (Continue Reading.)

To understand the spread of Islamic rape gangs in Great Britain, watch this:

I believe Brits are trying to get used to the idea that eventually their women will be taken captives so might as well learn to shut up now.

there is no proof that all the muslim taxi drivers had raped a british girl , and don't ever say that MUHAMMAD saws had taught any one to rape {Astaghfirullah} becoz he was the man who had taught the whole human kind not to do any " Haram" thing means (what is bad thing & which things are strictly prohibited in islam) ... becoz if some body rape some one it is called "zina" and by both ALLAH & MUHAMMAD {MAY ALLAH PEACE BE UPON HIM} this thing had mentioned, dat if anyone does zina means (rape or before marriage sex) his head should be beheaded ..... in our islam this things are strictly prohibited .... and when some muslim who doesn't follow
islam he is not muslim and he is not following MUHAMMAD saws. and QURAN...... so dat's why don't ever say thad MUHAMMAD had taught us wrong thing or QURAN is misleading any one.....
that is shaitaan dat who does all the wrong thing ... who brings the evil things in all of us mind ....
don't insult any one by false comments .. you will die one day and u have to return to that GOD who is ALLAH , and you have to give answers what wrong thing and unjustice words u have said and then u have to suffer a big penalty for your wrong publishing ....
MUHAMMAD saws was a great man , his life has passed by many problems , he was very precious for GOD he had got every thing but then also he always think for his ummah means for his generation .... which are us ,he always used to pray whole night and cry for only us , like u and me and for every one , becoz he knows that shaitaan had promise GOD that he will involve us in every type of sin big and small everything , and the biggest sin is shirk means to worship any other GOD which people will choose by his self , about GOD let me tell u dat God is one , he have no image , he is seamless, but he can see us ,
he cannot be a creature nor he can be a miracle , means he can't be a human being , he doesn't need to be a human being , he doesn't need to show any miracle being a human , also he can't be animals , he is who have made everything and no one can imagine dat how he looks because he have made uncountable looks , uncountable powers, uncountable elements & also uncountable creatures , uncountable miracle human beings ......... we people very easily make our god by watching any miracle by our eyes , but miracle is also nothing for ALLAH SWT , he have created uncountable miracles and given to selected people who he have choose for his work .... please now use ur brain and don't talk any wrong thing about any one ,,,, just think before talk an angel is kept beside you and he is just kept for writing everything what u r saying and publishing .... and at last when the final day will come he will bring ur all data which he saved ,, so don't say anything false and also don't speak any thing which u don't know about it ...okkkk