Are non-Muslims ever safe when there's a Muslim majority? Even on a boat ride? 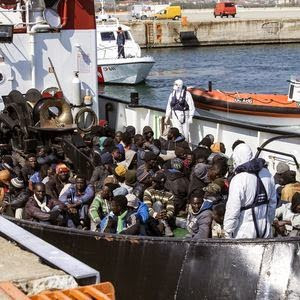 Rome (CNN)—Muslims who were among migrants trying to get from Libya to Italy in a boat this week threw 12 fellow passengers overboard -- killing them -- because the 12 were Christians, Italian police said Thursday.

Italian authorities have arrested 15 people on suspicion of murdering the Christians at sea, police in Palermo, Sicily, said.

The original group of 105 people left Libya on Tuesday in a rubber boat. Sometime during the trip north across the Mediterranean Sea, the alleged assailants -- Muslims from the Ivory Coast, Mali and Senegal -- threw the 12 overboard, police said.

Other people on the voyage told police that they themselves were spared "because they strongly opposed the drowning attempt and formed a human chain," Palermo police said.

The boat was intercepted by an Italian navy vessel, which transferred the passengers to a Panamanian-flagged ship. That ship docked in Palermo on Wednesday, after which the arrests were made, police said.

The 12 who died were from Nigeria and Ghana, police said.

Thousands of people each year make the dangerous sea journey from North Africa to Europe's Mediterranean coast, often aboard vessels poorly equipped for the trip. Many of them attempt the voyage to flee war and poverty in Africa and the Middle East.

More than 10,000 people have arrived on Italian shores from Libya since last weekend alone, according to the Italian coast guard. (Continue Reading.)

To understand the Islamic view of Christians, watch this short video:

Pure hatred! Sickening. Also the burning crime in Pakistan. But truly in the spirit of Mohammed.

David, here is a GREAT video on the Arab Muslim African Slave Trade. Please, please take a look at this and let the world know that the Muslims are no friends of BLACKS.

A comment to the video. It may be true that many muslims do not take these verses seriously but this does not mean it has no effect on them. Experts say a large percentage of muslims does not even know what is in the koran because they recite it in arabic. These muslims are influenced by the koran too (in my opinion).

In the summer of 2014 i felt the need to decide what my position on the question of islam should be. Is islam a threat to the west? I did my own research and made it into a website. adres: http://members.ziggo.nl/iiat/

The koran is obsessed by unbelievers. The in-group out-group theme is very prominent in the koran and one of my conclusions is this will cause trouble.

Greetings from the netherlands