As always, ISIS plainly declares their religious reasons for their actions. As always, our leaders assure us that their actions have nothing to do with religion. 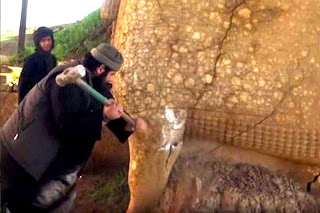 The destruction at Nimrud, located near the militant-held city of Mosul, came amid other attacks on antiquity carried out by the group now holding a third of Iraq and neighboring Syria in its self-declared caliphate. The attacks have horrified archaeologists and U.N. Secretary-General Ban Ki-moon, who last month called the destruction at Nimrud "a war crime."

"God has honored us in the Islamic State to remove all of these idols and statutes worshipped instead of Allah in the past days," one militant says in the video. Another militant vows that "whenever we seize a piece of land, we will remove signs of idolatry and spread monotheism." (Continue Reading.)

“..What we mean when we claim that the Qur’an was eternal is in the sense that it was eternally in the knowledge of God.”- Abu Bakr ibn

Don't spin with knowledge of True God, the Almighty; it is sin (guna) to do so. Because, those who live in dark cave under bondage of Evils, do not know freedom of living in Light. They know their way is Highway.

Mr. Abu Bakr said in previous posting quoted above that Quran is word of God and so it is eternal, but the Bible is not, it is corrupted. Who is living in Light, Christians or Muslims, can be judge by actions and teachings of the Bible and Quran only, not by science. All religions are founded by faith only. And faith comes from seeing with eyes, hearing with ears and understanding by mind. Christ taught Christians in parable “sowing of seeds” importance of understanding words of God. But Muhammad taught Muslims to fight with sword for Islam and die to live with Allah. Is fighting a character of Evil or Holy God?

ISIS, by Quranic teaching, is destroying History of ancient Iraqi Assyrian city of Nimrud, a site dating back to the 13th century B.C. Is this work of Light?

To tell the truth I believe Jesus as Son of God by His actions and teachings for wellbeing of humanity. God so loved the world that He gave His only begotten Son to save all mankind. But Muhammad fought for Muslims only to live in fighting.

Nobody likes to commit sins, but still everybody does. Humanity needs somebody’s sacrifice to free us from shackles of devils, and Jesus it did for Humanity. He picked mankind up from drowning with power of evils and gave hope even after our bodily death. What did Muhammad do for humanity??

Jesus heals blind, lames, gave life to dead, Muhammad did nothing. Jesus said not to judge other, but Muhamad said to kill non-Muslims. Jesus said to love Muslims (enemy), but Muhammad said not to make friends with Christians (enemy).

This basic teaching difference of the Bible and the Quran speaks about who is living in the Light and who lives in the Dark. Christians know that wages of sin is death, but there is one in God Head (Jesus Christ) who would advocate for forgiveness of His followers to God the Father. What would Muhamad do for Muslims? Ironically Muhammad, self-declared prophet asked Muslims to pray for him. Can this man Muhammad believable as Prophet of True God who is Holy and Righteous?

Good thing there are not a lot of devout Muslims around the great art of Europe.
Oh wait...!

Yet another reason to severely restrict Muslim immigration.

Mathew 7:
16 You will know them by their fruits. Are grapes gathered from thorns, or figs from thistles? 17 So, every sound tree bears good fruit, but the bad tree bears evil fruit.

Muslims are at the vatican giving dawah. How blasphemous!
https://m.facebook.com/ItalianDawahNetwork

Is Pagan Mecca next?

David, I read somewhere that before the end times according to islam the kaaba/mecca will be destroyed? Is this right?

Nothing is as disappointing as the inaction on the part of the United Nations. Nothing is as predictable as the tongue lashing and the continuous waste of our money in supporting this dysfunctional burden on mankind.

We need to free ourselves from inaction by withdrawing our membership to the UN and going our own way. Perhaps then we can stop the atrocities of Islam.

David, I like you guys a lot. But you have ignored the slaughter of 30 Ethiopians in Libya by ISIS as nothing......This is the worst thing that they could ever do....ambushing an immigration camp and taking more than 100 Ethiopians who had no business with Islam or ISIS and beheading them??? I think you should say some thing about that!! They have released the video a couple of days ago I think......I couldn't give you any links, I'm sorry, but I thought you must have heard about it by now, just please say something............Please......stay blessed!

David, I love you guys a lot, but I think you should have said something about the 30 Ethiopians that were slaughtered by ISIS in Libya. You kinda have ignored it! I mean it is massive! 30 innocent Ethiopians and some Eritreans were killed by ISIL after being taken from an immigration camp. I couldn't give you any link, but I think you should say some thing.....This is the one of the most horrific things that ISIS has done by far....