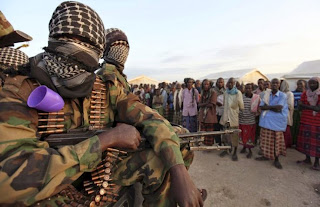 At least 70 people were killed in the attack and 79 more were injured, the Kenya National Disaster Operation Center said in a Twitter message.

Kenyan security forces surrounded the campus of Garissa University College and clashed with the gunmen throughout the day, eventually cornering them in one dormitory, officials said. Abdikadir Sugow, the spokesman for the Garissa county government, said the gunmen were seen wearing “combat gear,” including what appeared to be “either bulletproof vests or suicide bomb vests.”

The Shabab, an extremist group based in Somalia, issued a statement through a radio station it controls claiming responsibility for the attack. It said its fighters attacked the university early Thursday morning, began separating Muslims from non-Muslims and started an “operation against the infidels.” The group said in its statement that its fighters were still inside the university. (Continue Reading.)

I would not say that those tugs are killing in the name of allah I would rather say they are killing for allah and muhammad . The term " in the name of " can be wrongly interpreted and subsequently gives islamic polemicists a way out. For example, a christian can kill in the name of Jesus and yet in so doing he is acting in violation of jesus's command of non violence. When people claim to do something in the name of their deity we should investigate to find out whether their holy scriptures command them to do so. As christians we cast the devil and preach the gospel in the name of jesus and make disciples for Jesus because our bible commands us to do. Muslims use violence in the name of allah and kill people for allah and muhammad because the quran commands them to do.( suran 9:111). It's time for the muslim world and the world community that are too busy monitoring israel's retaliatory action against the so called palestinians to wake up and realize that muhammad and his allah are thirsty for the blood of christians and jews.

"When people claim to do something in the name of their deity we should investigate to find out whether their holy scriptures command them to do so."

I hope that people take your very sound advice. There are too many people happy to take the media's or the Muslim polemicist's word about what the Qur'an say. Someone writes a column that the Qur'an doesn't contain commands calling for the death of non-believers, and people seem content to accept it. It only requires that they open it themselves to see this is not true.

At lightning speed, however, Muslims will pull out the context card and argue that these verses can only be understood in the context of their time, EXCEPT the Qur'an NEVER indicates nor implies the need for a contextual reading. In fact, they are quite clearly instructions that are meant to be followed to the letter.

These commands for violence are over-arching generalized injunctions, not specific instructions on how to act against a specific opponent in specific circumstance.

With regard to this incidents, I hope that we will never allow ourselves to take lightly the deaths in another country. The news reports "two American killed in the attack on..." or "three Australians were shot in the mass murder...". I understand concern for our fellow countrymen but God does not think that way.

The deaths of these 70 Kenyans should not weigh on us less because it is not in our hometown.

"Every man death diminishes me for I am involved in mankind" John Donne.

Well said Wilson. I like your polemic vs their polemic.