Just when you think the U.S. State Department can't possibly get any dumber, the department promotes a radical Islamist group that advocates the overthrow of the British government and calls on Muslims not to vote (since voting is part of democracy, which is haram). 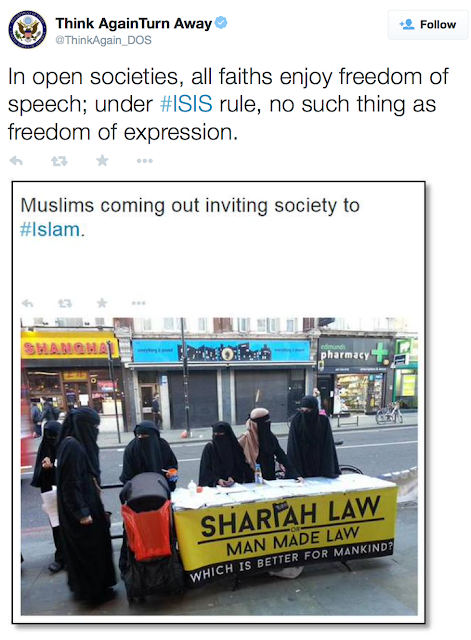 Daily Mail—The US government has made a bizarre internet gaffe by posting a British Muslim extremist’s photograph of veiled women calling for sharia law, citing it as an inspirational example of free speech in the West.

The American State Department’s ‘Think Again Turn Away’ campaign is designed to dissuade Muslims from joining IS – also known as ISIS – and other extreme groups.

The campaign posted the picture on its Twitter account last week, adding: ‘In open societies, all faiths enjoy freedom of speech; under ISIS rule, no such thing as freedom of expression.’

The photograph shows Muslim women, all in black burkas, running a stall in Dalston, East London. They are standing behind a trestle table covered in leaflets and a banner reading: ‘Shariah law or man made law. Which is better for mankind?’

An investigation by The Mail on Sunday has found the banner was used in an extremist campaign called Stay Muslim, Don’t Vote, which calls for strict sharia law to be imposed on Britain, as well as urging Muslims not to vote in elections.

The photo was given the caption ‘Muslims coming out inviting society to Islam’ – which was copied by the US State Department – by a man calling himself Abdulrahman Muhajir, whose Twitter account is suspended.

The Mail on Sunday can reveal he is Moshiur Rahman, a 33-year-old from Luton, who last year was one of 12 Islamists given Asbos banning them from taking part in demonstrations over a violent protest rally on Oxford Street. At least two of the gang are believed to be fighting for IS in Syria.

Anjem Choudary – the hate preacher who has repeatedly blamed British foreign policy for terrorist attacks and whose al-Muhajiroun group was banned by the Government – was present at the event in Dalston on March 7. He has also given talks in Walthamstow and East Ham at demonstrations where the sign was used.

The photo appropriated by the US State Department was first placed on Twitter last week by a woman calling herself Umm Usmaan, who is a leading figure in the anti-democracy campaign.

She described it as an ‘Islamic roadshow’ and included the slogan ‘stay Muslim, don’t vote’ when she put the photo on Twitter. (Continue Reading.)

This is beyond cringe worthy.

I just read that President Obama was set to become the no. 1 most polarizing American president of all time!

Now it looks as if he'll also be the presidents who got the most laughs.

I'm confused, I thought shariah law IS a man made law!

Today’s fight is between Evil black Burqa (covered) as picture speaks and light, true God. It is nothing new and started since throwing of evil angel Lucifer into this world as Bible described. God Himself is fighting with Evil. Because of this, God sent Jesus Christ to save us from Evil once for all. We are not afraid of Muslims. What did Muhammad leave for Muslims other than evil power? Do you see any good works came out from Muslims, other than random killings? Even School Children are not out of their mercy.

Christians are observing Lent (fasting) all over the world and now is time for thinking with realistic sense for God’s mercy and purpose of our lives.

Salman Rushdie by “Satanic verse” described Quran its true character. Muhammad was tempted by evil with power, wealth and sex when he was in a mountain cave, like Jesus Christ when He was alone in desert and starving for food not eating anything for 40 days and night.

Muhammad failed and received from evil verses of Quran, like Sharia Laws. But Jesus succeeded with strength from words of God from Scriptures. Devil fled leaving Jesus alone. Muhammad had no scripture to strengthen him and fallen into Evil’s prey.

Muslims are fools. With ISIS style democracy world cannot live Anjem Choudary must know it. British would kick him out when time would be right.

‘Shariah law or man made law. Which is better for mankind?’

There are several things wrong with that question.

Firstly the presumption is that Sharia law is not man-made law, which is an incorrect and absurd assumption.

Only a complete imbecile, or an illiterate, or a person in total denial and brainwashed to the point of blindness would come to the conclusion that the Quran is anything but a document produced by ignorant Arabs of the 7th century.

In fact it can be clearly seen it was produced mainly by Muhammad, a genocidal, egotistical, megalomaniac. Allah seems to be mainly concerned about him.

His laws include killing those who criticise him in any way and those who stop believing in him, or those who refuse to believe in him and his ridiculous claims.

Our western democratic laws have produced laws that demand equality for all humans and freedom for all.

In contrast Sharia demands slavery from all. Slavery of Muslims to "Allah" - which is actually slavery to the capricious whims of the megalomaniac Muhammad. Slavery of non-Muslims to Muslims and slavery of women to men and being stuck forever to the barbaric laws framed by him.

Which is superior? That's not a hard one to figure out.

It is an article of faith among Muslims, which I believed as well back when I was Muslim, that if Sharia law is correctly implemented it will result in the perfectly just society, which is what Islam experienced in the glory days. Just needs the right implementation after destroying the enemies and among the right kind of Muslims. Similar to what Marxists/Statists believe.

Christianity teaches that society is not perfectable through the law given that we are infected with Original Sin. Jesus disappointed some of His followers such as Judas when He did not usher in a political kingdom but said the Kingdom of Heaven is within us. So no Utopia on Earth, per se. And as with the parable of the weeds and cockles, there is not to be a separation of good and evil people except at Judgement Day.

I am not surprised at all with the americain muslim brotherhood administration.
Thank you for the info Dr. David

quote: Jesus disappointed some of His followers such as Judas when He did not usher in a political kingdom but said the Kingdom of Heaven is within us.

Now WHAT gave the Jews of Jesus time the HOPE for this utopia? Well if not the GOD THE JEWS were honoring?

Isaiah 1:26 New International Version (NIV) ALL QUOTES taken from this.

26 I will restore your leaders as in days of old,
your rulers as at the beginning.
Afterward you will be called
the City of Righteousness,
the Faithful City.”

Once he is King, leaders of other nations will look to him for guidance. (Isaiah 2:4) (NIV)

4 He will judge between the nations
and will settle disputes for many peoples.
They will beat their swords into plowshares
and their spears into pruning hooks.
Nation will not take up sword against nation,
nor will they train for war anymore.

11 The eyes of the arrogant will be humbled
and human pride brought low;
the Lord alone will be exalted in that day.

12 The Lord Almighty has a day in store
for all the proud and lofty,
for all that is exalted
(and they will be humbled),
13 for all the cedars of Lebanon, tall and lofty,
and all the oaks of Bashan,
14 for all the towering mountains
and all the high hills,
15 for every lofty tower
and every fortified wall,
16 for every trading ship[a]
and every stately vessel.
17 The arrogance of man will be brought low
and human pride humbled;
the Lord alone will be exalted in that day,

Can ONE BLAME Jews for having such hopes?
These VERY SAME hopes the JEWS of Yathrib/medina still held, when the PAGAN turned Muslim declared himself to be a prophet in the LINE and tradition of the Jews. But he did not stop there, he allowed the Pagans who followed him to accept himself as the MESSIAH for the world.

How can something like this TAKE PLACE AFTER the second coming of the Lord?

Just an aside to David Woods,

I was not aware that was possible, but apparently 5,000 is the limit.

5.000 friends! Boy, must suck to be you when it's time to send out Christmas cards!

I don't think anyone blames the Jews for expecting a political Messiah, that is a valid interpretation of the Scripture, IMO. But who understands a prophesy before it's fulfilled?

In any case, it's hard to see how some of the prophesies could be fulfilled with a political Messiah. For example, the New David would have to be immortal to make the prophecy eternal so I can't see how that could work.