When Muhammad established his headquarters in Medina, he began attacking the Meccan caravans. Why? Because the caravan trade was an essential source of revenue for the people of Mecca. By destabilizing the trade, Muhammad could destabilize the economy, and induce panic.

Today, jihadists in Tunisia attacked a museum popular among tourists. Why? Because tourism is an essential source of revenue for Tunisia. By destabilizing the industry, jihadists can destabilize the economy, and induce panic.

But none of this has anything to do with Islam, right? 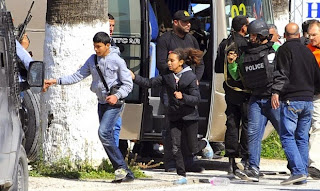 CNN—Gunmen killed 17 tourists and two others -- one of them a Tunisian security officer -- on Wednesday at a museum in Tunisia's capital in what the North African nation's Prime Minister called a "cowardly" terrorist attack.

But the bloodshed isn't necessarily over, with Essid saying that authorities are looking for three other gunmen.

"It's a cowardly attack mainly targeting the economy of Tunisia," the Prime Minister said. "We should unite to defend our country."

The scene played out in the heart of Tunisia's capital, in a building linked to where the nation's parliament meets and in an area frequented by tourists.

At least two cruise ships -- the MSC Splendida and the Costa Fascinosa, which alone had more than 3,000 passengers -- were docked in Tunis at the time, and both had passenger tours of the Bardo Museum organized for Wednesday morning, their parent companies said. The MSC Splendida's expected Wednesday night departure from Tunisia could be delayed, while the Costa Fascinosa is set to head next to Spain and France before concluding its cruise Sunday in Italy.

It's not known if any cruise ship passengers died Wednesday. Essid did say that Polish, Italian, German and Spanish tourists are among those killed, with another 20 tourists plus two Tunisians wounded in the attack. He suggested that the terrorists wanted to hurt Tunisia's economy by going after tourists. (Continue Reading.)

What good came out of Muhammad, prophet of terrorist Islam, established in seventh century?

Tunisia, once called “Rising Sun” of Arab Democracy or in other word “Arab Spring”, but alas, even that goodness for Muslims have been robbed by Muhammad’s call for Jihad. I wonder how Britain being birth place for democracy, still allow Muslim to practice Islam in Britain? The sooner British ban Islam like Nazi of Hitler, better it is for them as well as for rest of the world. Anjem Choudary, can openly lobby for Sharia Law which is not less than Hitler’s Nazi Party.

With David Wood’s simplified geometric model it becomes clear why Muslims of all walks of life, Ph.D., Rich and Famous, Poor and snick Thieves, robbers, murderers etc. all are taking part of Jihad spontaneously. ISIS does not pay them anything for life sacrificing services, whereas, USA spends billions of dollars to build up army.

As David explained, all you need only three characters, 1) Believe, 2) Knowledge and 3) Obedience to be dedicated servant of evil. It is only possible by evil power. People try to be good with lifelong dedication but still they are called sinners. But these jihadists are perfect in their faith, never look back and die happily. Poor Muslims, they fail to understand that all that glitter is not gold. What is good to me, actually it is bad to eye of Holy God. All Muslims will burn in pool of Sulphur after Final Judgement Day, unless they turn to path of Jesus. Life is not that easy as Muslims think.

In my school I was not good in geometry, but David’s simplified model exposed hidden power of devil’s Islam. I hope concerned authority would be benefited in formulating strategy to defeat ISIS. Thanks David.

Sigh, I can hear the responses already...misunderstanders of Islam...zionist squirrel conspiracy to discredit islam...yadda yadda yadda.

Sadly the clueless will never fire up a brain cell to put 2 and 2 together and realize islam is violent at it's core.

Hello David I wanted to say thank you for everything. I've commented on a few of these posts on this website, on your youtube channel and on your facebook, but I guess you didn't get my thank you on the Facebook message I sent you so I just wanna thank you here I am 15 year old sophomore and I go to Cimarron memorial highschool in Las Vegas NV. As a freshmen I was just another teenager who called himself a Christian and didn't really care to much about learning about God I was pretty much an agnostic even though God had answered a lot of my prayers but they still weren't enough for me. Just like how Jesus performed many miracles but people didn't want to give up their life of sin, anyways I had an atheist friend come over with upside down crosses on her shirt one time to my house and she would be tired a lot and so she would take naps at my house almost everyday but it wasn't until she wore that shirt that a door was opened up to me and I started experiencing demonic attacks when I was sleeping, scientists call this sleep paralysis but they don't know what causes it they only have theories and the theories are very inconsistent and aren't really strong to explain what I experienced, well anyways I was terrified on what I was experiencing I didn't know what fear was until experiencing sleep paralysis it feels like you have someone on your chest and you aren't able to move, talk, or even open your eyes I had about 2 attacks and I became afraid of the dark and I had to sleep with my mom some nights because of the fear and if not with my mom then my brother it was embarrassing because I was 14 and I was sleeping in the same bed as my mom. After a while I started to get mad because I didn't want to be scared anymore and I came across a sleep paralysis documentary by Christ White it went over the scientific reasons first then over the real causes which where demonic attacks, and after all that, he told us how to stop it for good and it was accepting Jesus Christ as your savior and rebuking them in his name, so I did and I never had sleep paralysis anymore Jesus once again performed a great miracle in my life and I was a Christian, and then I started talking to Muslims about Islam. They where telling me that Jesus was just a prophet of God and that he wasn't God, so I started considering what Islam thought and I didn't know what was true even After I experienced miracles I started to question myself to think that sleep paralysis was just something in my head, I didn't know what to do, so there was only one person I could talk to about this and that was God, so I asked him who he was and to show me what is true, a little while later Im going through Facebook and I see a video called ''The Quran, The Bible, and the islamic dilemma''. I then looked at the video on youtube channel and I saw your videos about Islam and what a horrible religion it is. Thank you David for what you're doing I want to major in Astronomy to prove to people God created the Universe through space, I also want to take some theology and philosophy classes and a Christian apologetics class so I can become an astronomer and Christian apologist I know this is what God has planned for me thank you David for saving my faith and I hope I get to meet you one day and have a conversation with you about Apologetics and that the Christian God is the only true God.

How do you know their motives are islamic in nature?
nobody has claimed responsibility for the attack yet.
I'm not saying you're wrong, I think you're probably right in this case.

Good to hear from you. I don't remember seeing a message from you on Facebook. Are we friends on FB? If not, what's your FB name so I can send you a friend request?

What an awe inspiring testimony from such a young man.. I am so moved!

"Jesus, continue to shine your Glory as this young man Life in your Grace,
All Praise and Honour to you our Lord Jesus Christ, Amen"

Dear Mario,
There will be many distractions and deviant worldviews as you attend college, Keep you eyes on the Word & Jesus,
"The Gracious Lord Bless you and your family with your heart's desires & keep you in His Shalom Peace"

i would like to ask , is send adulterer back to God clean by Stoning ?
they really confuse me.

David best exposure to saturate u.s. aitwaves witj your message msy be thru tslkshow and sat night live circuits. Consider how they like to poke fun at gov. Maybe send your youtube on Obamas fairytale best exposure to speak to whole u.s. at oncehollywood is mostly all jewish they would welcome more support and back your message.