ISIS is training its "cubs of the caliphate" to execute enemies of the Islamic State. Meanwhile, children in the West are being taught never to criticize Islam. 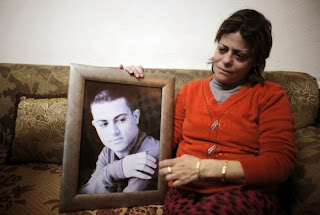 Reuters—A video posted online by Islamic State militants on Tuesday showed a boy fatally shooting Muhammad Musallam, an Israeli Arab accused by the group of having signed up as a jihadi to spy for Israel's intelligence service.

The video, published by the group's Furqan media outlet, showed Musallam, 19, sitting in a room wearing an orange jumpsuit, talking about how he had been recruited and trained by Mossad. He said his father and elder brother had encouraged him.

After that, it showed Musallam being escorted to a field and then being shot in the head by a boy, described by an older, French-speaking fighter as one of the "cubs of the caliphate".

Reuters could not immediately verify the authenticity of the footage, which also appeared on Twitter feeds used by Islamic State supporters.

Israeli security officials said they were aware of the video but could not confirm that it was authentic.

The video, about 13 minutes long, showed Musallam on his knees when the boy armed with a pistol and wearing a military uniform fires one bullet into Musallam's forehead. The boy then fired three more shots into his body.

In the video, Musallam said he had joined Islamic State to report to the Israelis on weapons caches, bases and Palestinian recruits. Israel and his family denied that he was an Israeli spy. (Continue Reading.)

The actions of these Jihadi children vindicates the judgement of God from the Old Testament when he used the Israelites to lay waste to every single living thing among the Amalekites.

ISIS is a blessing in disguise to show the world what real wickedness is. Wickedness comes from Satan, who is the god of Islam, whose religion was what Muhammad brought. Osama, turn away from Satan and come to Jesus. He is more than a prophet and more than a man. Muhammad lied to you and the more you mention his cursed name, the deeper the hole you are digging.

I have begun to wake up and wonder what the next horror story will be, but then I remember that people around the world have, in varying degrees, been experiencing the oppression of Islam for centuries.

This does not negate the horror of any of these incidents, but it makes me realize that I have been asleep in the light for far too long.

Osama, do you still want to claim that ISIS are really Mossad agents?

JS, I was thinking the same thing. If it is still not waking up Muslims, at least it is waking up all the others.

Neither God or his judgements, past or present, can be vindicated (cleared of blame) by the actions of evil men.

The example of the Amalekites is also more complex and really cannot be taken out of historical context. You may enjoy reading the article below with regard to this.

I also disagree that wickedness comes from Satan. Wickedness comes from the hearts of men. Satan is very skilled at utilizing and manipulating that evil, but he is not its creator. He is a thief and a deceiver, who is disarmed by faith the size of a mustard seed.

We should be careful to not give him any more credit than he deserves!
You might enjoy C.S. Lewis's "Screwtape Letters" on this topic.

ISIS is evil because it is run by men who embrace an ideology that rejects God. Because of Jesus Christ, the men and women within ISIS can be forgiven and made whole. That's how amazing God is!

Isis is busy training and recruiting next generation jihadists while muslims like Osama are trying to make the world believe that they aren't really islamic.

Highly unlikely that he was an Israeli spy. Just a brainwashed Muslim who joined ISIS and then saw first hand what it was all about - conquest and murder and then tried to leave.

Unfortunately Islam is a one-way ticket.

Muhammad decreed in the Quran that those that try to leave after having once joined have to be killed. "...if they turn their backs, take them, and slay them wherever you find them;.." 4:89

He saw to it personally himself and that's what brainwashed, believing Muslims have to follow.

Here are another two unfortunate gullible souls, who have repented, but alas there is no way out

Teenage ISIS "poster girls" who ran away to join ISIS - in October last year they were pregnant and wanting to return. December one at least was dead and today god knows.
http://www.dailymail.co.uk/news/article-2788605/Teenage-Austrian-poster-girls-ISIS-moved-Syria-live-jihadis-pregnant-want-come-home-officials-say-impossible.html

This reminds me of another state in the last century that also executed people for lack of political or ethnic purity (including Jews).

Thanks for sharing those links. I hope that Muslim parents will read these and be encouraged to be vigilante, even if it means their children will hate them for a period of time.

One of the problems is that even moderate Islam supersedes their rights as parents to raise their child the way they believe is best.
These parents are not the final authority in their children's lives and every appeal they make to their child's conscience only re-enforces the idea that their parents are weak or apostate.

In effect, parents say "obey us", but Muslim youth have been taught to obey only Allah and his prophet.

My prayers are with Muslim parents around the world.