Every day, the global jihad grows larger, more organized, and better equipped. Meanwhile, politicians and the media continue to protect and promote the ideology that calls for jihad. 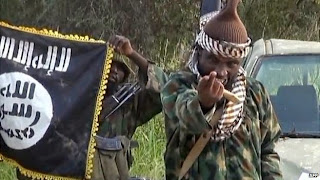 Reuters—Nigeria's militant Islamist group Boko Haram has pledged allegiance to Islamic State, which rules a self-declared caliphate in parts of Iraq and Syria, according to a video posted online on Saturday.

"We announce our allegiance to the Caliph ... and will hear and obey in times of difficulty and prosperity," read an English language translation of the video broadcast in Arabic that purported to be from the Nigerian militant group.

The pledge of allegiance was attributed to Boko Haram leader Abubakar Shekau.

The video script identified the Caliph as Ibrahim ibn Awad ibn Ibrahim al-Awad al-Qurashi, who is better known as Abu Bakr al-Baghdadi, the leader of Islamic State and self-proclaimed caliph of the Muslim world.

Baghdadi has already accepted pledges of allegiance from other jihadist groups in the Middle East, Afghanistan, Pakistan and north Africa. (Continue Reading.)

What are all these Islamic groups doing pledging allegiance to these "Jewish" organizations? ;)

yeah Osama...what is it that is making these islamic organizations follow the Zionist regime? Is the water?

thanks france for Mali and little thx for General Sisi in egypt. if they didn't do what the did, mankind would have got an islamic crescent... a real caliphat

Read Deuteronomy 32 the song of Moses, give special attention to verses 31 through 35. This is what we are up against, and this evil is among our people to. All we can do is keep speaking the truth and praying that these peoples eyes will be opened and that our bothers and sisters eyes will also be opened. This would be a good time to remember the seven Churches in revelations, and how God only found favor with two of them, the others were all doing something wrong, But Smyrna and Philadelphia what did these two have in common, they knew of those that claimed to be of Judah but did lie and were of the Synagogue Satan. Please read Revelation 2:8-11 this is about Smyrna and Revelation 3:7-11 this is about Philadelphia.