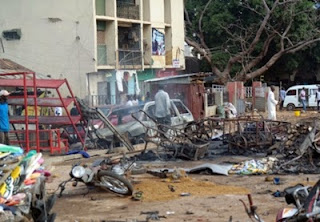 Reuters—Four bomb blasts killed at least 50 people in Maiduguri in Nigeria's northeast on Saturday in the worst attacks there since Islamist militants tried to seize the city in two major assaults earlier this year.

There was no immediate claim for the bombings but they bore the hallmarks of the Islamist group Boko Haram, which has been waging a six-year insurgency to carve out an Islamic state in Africa's biggest economy.

President Goodluck Jonathan, who is seeking re-election on March 28, has been heavily criticized for failing to crush the group. The vote was postponed for six weeks from Feb. 14 for security reasons.

Around noon on Saturday, the driver of a motorized tricycle detonated a bomb when the vehicle was prevented from entering a fish market on the Baga road in the west of Maiduguri, market trader Mohammad Ajia said after fleeing the scene.

Another blast hit the busy Monday market shortly afterwards. A car bomb exploded later by a bus station near a Department of State Security (DSS) office, according to a civilian member of a joint task force.

State police commissioner Clement Adoda said via text message there had been four blasts in the city, without elaborating on the location or nature of the fourth explosion.

We are accustomed to the savagery of Africa, a wasteland of a continent.

No we are not accustomed to this savagery, yes we are completely overwhelmed by this insanity but our faith in Christ is unyielding and NO my country is not a wasteland.

Africa is absolutely not a wasteland, it is land where amid great evil, there is great overcoming!

When calamity and persecution befalls Christians in Africa, we think that they do not feel it as we do because it is so consistent. This is a lie! The frequency of evil does not lessen the horror of it!

Christians in Africa face tribulation that we in the West have no idea about, and they do it while worshiping and praising their God and Saviour!

God bless you my brothers and sister in Africa! You inspire me with your courage, tenacity and faith!

God knows what you have endured for Him! Stay strong in the knowledge that not one hair on your head is hurt without Him knowing.