Many liberal universities won't even allow Ayaan Hirsi Ali to criticize honor killings on their campuses, but Cornell University has no objections to funding events supporting ISIS and Hamas.

Don't forget that these are the universities that are "educating" the next generation of leaders (as they "educated" many of our current leaders).


I'm assuming that Joseph Scaffido is more clueless than his associates and that Cornell wouldn't actually allow an ISIS event on campus. However, since Columbia University organized an event featuring Iranian President Mahmoud Ahmadinejad, it's difficult to underestimate the idiocy rampant in Western universities. 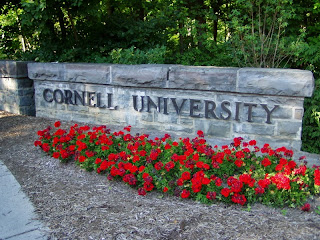 Scaffido casually endorses inviting an ISIS “freedom fighter” to conduct a “training camp” for students at the upstate Ithaca campus — bizarrely likening the activity to a sports camp.

Is it OK to bring a humanitarian pro-“Islamic State Iraq and Syria” group on campus, the undercover for conservative activist James O’Keefe’s Project Veritas asks.

Sure, Scaffido says in the recorded March 16 meeting.

Scaffido doesn’t even blink an eye when the undercover asks about providing material support for terrorists — “care packages, whether it be food, water, electronics.”

How about supporting Hamas?

No problem at all, Scaffido said.

“The university is not going to look at different groups and say, ‘You’re not allowed to support that group because we don’t believe them’ or something like that. I think it’s just the opposite. I think the university wants the entire community to understand what’s going on in all parts of the world,” Scaffido said. (Continue Reading.)

Sanity is gathering dust on a bookshelf in a long forgotten part of the library of Cornell University.

Here is a potential "Training" course for ISIS fans of the Cornell University.
http://littlenotesfromparis.blogspot.com.au/2014/08/the-proper-way-of-beheading.html

Weird how hard it is for secular people to name evil. Everything has so much nuance, in the end it is a type of cowardice that bows to the perceived strong and powerful.

Turning and turning in the widening gyre
The falcon cannot hear the falconer;
Things fall apart; the centre cannot hold;
Mere anarchy is loosed upon the world,
The blood-dimmed tide is loosed, and everywhere
The ceremony of innocence is drowned;
The best lack all conviction, while the worst
Are full of passionate intensity.

Surely some revelation is at hand;
Surely the Second Coming is at hand.
The Second Coming! Hardly are those words out
When a vast image out of Spiritus Mundi
Troubles my sight: a waste of desert sand;
A shape with lion body and the head of a man,
A gaze blank and pitiless as the sun,
Is moving its slow thighs, while all about it
Wind shadows of the indignant desert birds.

The darkness drops again but now I know
That twenty centuries of stony sleep
Were vexed to nightmare by a rocking cradle,
And what rough beast, its hour come round at last,
Slouches towards Bethlehem to be born?

Isaiah 5:20 Woe to those who call evil good and good evil, who put darkness for light and light for darkness, who put bitter for sweet and sweet for bitter.

so I guess he won't mind a KKK club or a Nazi club either.

Watch out, this university and their deans was paid handsomely by ISIS etc...

Hi I have been reading your website and agree with your thoughts on Islam.

I am a christian and our ministry prints anti islamic literature. I would like to send you a free pack. Here is our website www.aggressivechristianty.net

I heard Ravi Zacharias say that the west has "educated ourselves into imbecility." When you have a leader in a major university say such things, I can think of no better words to describe our relativistic, politically correct and "educated" society. Amazing

Wow! Did you write this poem?

It is excellent. Stunning use of metaphors!

David, speaking of universities, HAMZA TZORTSIS in Michigan this weekend holding "workshops" at some universities there. Can you get some folks from ABN to go there and challenge him for a debate?

I wish!! Sorry I didn't put put the attribution it's by William Butler Yeats, written shortly after WW1.