ISIS attacked Christian villages in Syria and took at least 90 captives. These captives will either be ransomed or executed (and, in the case of the women and girls, raped). Am I an "Islamophobe" for objecting? 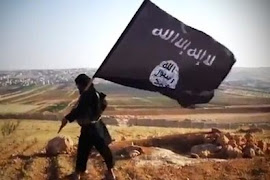 Reuters—Islamic State militants have abducted at least 90 people from Assyrian Christian villages in northeastern Syria, a monitoring group that tracks violence in Syria said on Tuesday.

The British-based Syrian Observatory for Human Rights said the militants carried out dawn raids on rural villages inhabited by the ancient Christian minority west of Hasaka, a city mainly held by the Kurds.

Syrian Kurdish militia have renewed their assault on the militants, launching two offensives against them in northeast Syria on Sunday, helped from U.S.-led air strikes and Iraqi peshmerga who have been shelling Islamic State-held territory from their side of the nearby border.

This part of Syria is strategically important in the fight against Islamic State because it borders territory controlled by the group in Iraq, where last year the ultra-hardline group committed atrocities against the Yazidi community. (Continue Reading.)

To understand what Islam teaches about unbelievers, watch this:

Brother David, I cannot control my anger. It's liberalism that creates these coward leaders in the west that make them into dhimmis of the Muslims.

How dare this apostate, Abdullah Hakim Quick, criticises Christians while his people are taking our people? How can we combat these people David? I'm so upset how these guys can get away speaking of us like this.

You guys have the war addiction so bad. What ISIS has is rubbing off on you. You are beginning to trust not only in the power of the gun, but the power of the state to get what you want, and you have begun to dehumanize one group (Muslims), so as to have the ideal enemy to fight. You will not win. The power of death is a virus, and you have it. What do you want to wake us up to? The need to fight Muslims to the utter bitter end of it all? That is what you have, an addiction. I'm talking about the idiots, the dangerous idiots, who want to propagate the LIE that we have to fight this war. It is nothing less than propaganda put out by the arms industry. This is part of the virus. It is one thing when they have to pay to propagate this, and they do, but they much prefer when they can brainwash a large group to do this work for free. This here, is nothing less than propaganda

My religion (organised system of ritual and practice) is Druidry. However, I believe that that which is now called 'God' came to earth in flesh, as a man, Yeshua. I believe that Yeshua died on the cross and that he was resurrected by 'God'. I love who Yeshua is and his teachings are true and pure.

However, I do not understand the overwhelming amount of concentration upon his message of 'eternal life'.

For me, it is not about 'eternal life'.

It is about what is happening on earth. The rape, murder, violence, evil (Islam) etc

But my own personal OPINION is that too many Christians are putting too much emphasis upon a personal life after death eternal existence (The Catholic heaven?) and not engaging in what is needed for the survival of Christ's ways on earth.

Yes, He/we, may not be 'of this world' - and interpretations can differ on this - but, why bother with Christ's model of human behaviour if it doesn't matter on earth?

It does matter. All innocent beings matter to that now called 'God'.
Following Christ's model on earth may help YOU achieve eternal salvation for yourself but not stoning women helps those women, loving your neighbour as yourself helps your neighbour as much as your own claim to eternal existence, eating bread and wine and not partaking of flesh and blood helps the animals that would otherwise be slaughtered as well as your self (no apologies for my Druidic interpretation on this last one - I will not cover it in depth here)

Do we chase 'eternal life', to save 'ourselves', or should we be concerned with Earth and all innocent beings and point to the devil?

Aetheists are turned off by the confusing idea of eternal life and preaching 'come and get your eternal life' is not attracting them to scripture or the truth of it.

The prophecies relating to Islam and the anti-Christ in the Old and New Testaments is so clear in the light of today's events that pointing this out (even to the Muslims) is the key to drawing souls to Christ.

Until sick, most Aetheists are more concerned with the plight of their children on earth than with achieving eternal salvation for themselves.

Preaching eternal life will not bring them to scripture and truth.

REV 16: 19
The great city split into three parts, and the cities of the nations collapsed. God remembered Babylon the Great and gave her the cup filled with the wine of the fury of his wrath.


I PRAY THAT THE LORD AND SPIRIT OF ALL THINGS THAT HAVE, DO AND WILL LIVE, WHICH IS ONE OUT OF TIME, BESIDE THE EARTH, WILL FLOOD THE MIDDLE EAST WITH DREAMS OF HIS COMING IN THE FLESH AS YESHUA WHO IS BOTH DEAD AND ALIVE AND ETERNAL WITH THE SPIRIT OF THE ALMIGHTY. AMEN.

Please do not apologise for the length of your post. It's not that long, at all and it's great that you've been able to include so many of your thoughts.

There are much more clever minds than mine here, so I'm just going to try and respond to a few of the things you raised if that's okay.

The first question that you had was about eternal life. We probably have a slightly different definition for that term, but for me, and I think most Christians, "eternal life" includes the here and now.

You see, my "eternal life" began when I entered into relationship with the Lord Jesus, a relationship through which all my sins were forgiven (a fancy, schmanzy way of saying 'salvation'). It's not something far off, or something I'm waiting for.

I think Paul said it best when he wrote "For me to live is Christ, but to die is gain" (Phillipians 1:21). So every day I live, is with and for Christ and part of that eternity, but when this mortal body dies then I'll actually see Him face to face. I mean, it really doesn't get any better than to look into the eyes of the One you love, does it?

Meanwhile, my eternity is going on here on earth and I think many Christians share that view. The reason I believe this is because a significant portion of the hospital, schools, orphanages, shelters, rescue operations, charities, etc. etc are run by eternity believing Christians.

Two of my children have worked in Asian orphanages, many of my friends have worked or work overseas and my husband and I are off to do the same in a few months. None of us would do this if we didn't think the innocent (and even the not so innocent) of this world mattered.

I've been around a while and this is definitely the norm for the largest percentage of Christians that I know.

If you visit the website of some of the well-known humanitarian aid organization that are not specifically Christian, you will find many were founded by Christians.

So, eternity for Christian begins in the here and now but continues into forever as these mortal bodies give up. Focusing on eternity in this sense, means that today is just as important as tomorrow, and life here does matter!

The second issue I thought I'd try and look at is your comment,
"Following Christ's model on earth may help YOU achieve eternal salvation for yourself."

Following Christ's example will not ever help you achieve eternal salvation! No matter how good you are at it.

The gift that God gives man is a gift. It comes through God's unmerited, undeserved favour (ie. grace) and is received when we place our trust in the Jesus as the Lover and Saviour of our souls. You can't earn it, or work for it. You can find that in Ephesians 2:8,9

Why do Christians follow Jesus' example then? Is it so you can score brownie points? No! It's because one of the thing you learn is that Jesus has your back! If He leads you in a certain way, you can absolutely sure that it's the best thing for you and the best things for those He's sent you to look after.

You also wrote too many Christian are "not engaging in what is needed for the survival of Christ's ways on earth.

I've got to agree with you there 100%, but there's a reason for that.
We don't have to work for the survival of God's ways on earth because they are not ritual, form or religion. God's way are about relationship, not legislation. God's ways effect culture and human law, but they are not cultural or legalistic by definition.

This misconception is most evident in the deeds of Norway's terrorist Anders Breivik.

That doesn't mean we don't stand up to injustice, fight oppression or have a voice in government. We must certainly do these things, but God's ways are more concerned about the heart of man, where the problems begin.

Anyway, I hope that's helped in some small way.

"This here, is nothing less than propaganda."

I'm not sure who you are talking to, but I agree that there is a grave concern when people begin to find solutions in terms of numbers, fire power and military action.

However, I cannot find anywhere in the articles on this blog where such a response is encouraged or even vaguely endorsed.

Nor can I find an article which even implies that we should fight Muslims "to the utter bitter end of it all".

When you say "here", do you mean in the comments that someone has posted?