Hmmm. With so many peaceful verses in the Qur'an, where did such a young boy get the idea that Islam promotes killing? 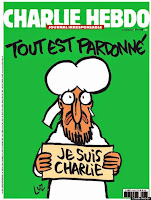 PARIS (Associated Press) — Police detained and questioned an 8-year-old boy from the south of France who claimed to support the men who attacked the satirical weekly Charlie Hebdo, drawing criticism Thursday that France's measures to prevent people from defending terrorism have gone overboard.

Dozens of people have been arrested and accused of defending terrorism since the attacks, with some already drawing yearslong prison terms in special expedited court proceedings. But the child from the southern city of Nice appears to be the youngest by far.

The boy declared "The French must be killed. I am with the terrorists. The Muslims did well, and the journalists got what they deserved," Fabienne Lewandowski, deputy director for public security in the Alpes-Maritimes region, told BFM television. She said the child also refused to take part in the national minute of silence for the victims on Jan. 9. (Continue Reading.)

To understand why an eight-year-old boy has such a low view of non-Muslims, watch this:

Its good to see Muslim parents teaching their kids the basics about Islam. You don't see that much in westernized Muslims

If David Wood could recover from psychopathy, so can this kid. Let us pray!