Kayla Mueller went to the Middle East to help Syrian refugees. The Islamic State didn't have much gratitude. 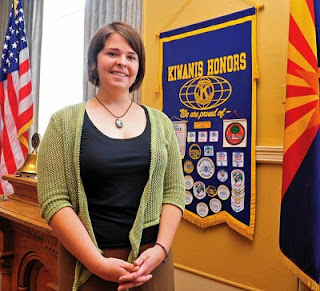 Reuters - President Barack Obama and the family of U.S. aid worker Kayla Mueller confirmed on Tuesday that the last-known American hostage held by Islamic State militants had died, with Obama promising to "find and bring to justice the terrorists who are responsible."

U.S. officials said the family received an email and photograph over the weekend from her captors that confirmed her death but said the circumstances in which she died remained unclear.

Mueller, 26, was captured in August 2013 while leaving a hospital in the northern Syrian city of Aleppo. She previously had been working in Turkey providing humanitarian assistance to refugees from Syria's bloody civil war.

Islamic State said on Friday that Mueller was killed when Jordanian fighter jets bombed a building where she was being held outside Raqqa, a stronghold of the Islamist militant group.

Jordan and U.S. officials have expressed doubt about the account of her death offered by Islamic State, an al Qaeda offshoot that controls wide areas of Syria and Iraq.

Mueller's family said in a statement on Tuesday that they were "heartbroken" to learn of her death and released a copy of a letter she had written in 2014 while in captivity. (Continue Reading.)

"Kayla Mueller went to the Middle East to help Syrian refugees. The Islamic State didn't have much gratitude."

And let me guess what is being implied here: Islam commanded her death! Right? I can already smell this load of crap coming from the anti-Islamic parrots that post here.

ISIS is evil. It is a Zionist state that is bent on creating tumult and religious wars.

@Osama Abdallah,
We can find that your prophet Muhammad helped at least 16 women by marrying them and gave them food and shelter in return for marriage. But other than that Muhammad did nothing to teach you, the Muslims that serving the poor, needy one can find True God.

American Aid worker Kayla Mueller found God helping divested people of Syria. Muslims do not know that her innocent blood won’t go to nothing. May Almighty God rest her soul and give comfort to her bereaved family and strength them in this trouble time!

It is another evidence that Muslims are ruthless. Even Ms. Kayla could not win hearts and minds of Muslims serving them in war torn Syria. There was no protest from Muslims world to save her from another Muslims who killed her by the name of Islam when she was living a captive terrible life. Where were you Osama Abdallah?

What a religion Islam, meaning submission to Allah who even did not commanded his slaves like Osama Abdallah to show mercy at least to women and to those who do good to people and does not harm Muslims!

Wake up Osama Abdallah you are worshiping and submitting to moon god. You are defending and following a prophet who is not yet in heaven and he needs your prayer to be in heaven. And again you are hoping to be in heaven holding tails of Muhammad. What an unrealistic believes that came from a book believed dropped from blue sky! Loll!

Islam is the Syphilis of the Soul that eats away all goodness. My God, the One True God, the God of Israel and of Christians, Who's Son was Jesus, is a God of Love, Light, Laughter, Peace, and Good Will. The entity of Islam, Allah, is an entity of Hate, Death, Destruction, Darkness, and all that is Evil! The True God lives in LIGHT, while Satan/Allah hides in Darkness. That is why Mohammud heard Satan's voice in the darkness of a cave. Islam is Satan's Church of Death.

"ISIS is evil. It is a Zionist state that is bent on creating tumult and religious wars." - Osama Abdallah

Yes, ISIS is evil, no it isn't a Zionist squirrel conspiracy to discredit islam.

Please stop making yourself look like a complete idiot.

God IS his FATHER
Jesus is the SON,
The Son of Mary is a “savior”
His place is at the “RIGHT HAND OF God, not in the “second heaven” as Muhammad, insists.
Does Jesus speak about HIS FLESHLY “part” the one which was nailed to the cross?

Further does Jesus draw a distinction between the “spiritual being” which can NOT be nailed to the cross and his FLESHLY body which was nailed to it? And so Jesus NEVER SPEAKS about a SECOND person who took his place on the crossi

All these IDEAS one can find IN the apocalypse of peter if one reads it carefully.

I don't see any body question how all those foreigners who came to help people in the area that
the rebels control end up in the hands of ISIS?

If ISIS is a Zionist state why don't you pray for the pilot.
He was a devout Muslim.

You said ISIS is a Zionist state.


Just one please ... thanks, I will be waiting

Isis is a Zionist Conspiracy you say? What about the Shia Religious leaders of Iran? Are they part of the Zionist conspiracy too? Jews constitute roughly 2/10ths of 1 percent of the entire worlds population. I know several Jews, so by your theories, every single Jewish person alive must be part of this vast conspiracy.

So, where is this love of Jews this "true Islam" preaches? Jew Hate is in your Koran, it's in your Sunna, it's in your Hadith, and manifests itself in your unquenchable hate of all things Jewish. And when Isis justifies their behaviour using Islamic sources, you say that's not Islamic.

If your assertion that Islam is peaceful & tolerant of other religions were true - ignoring 1,500 years of barbaric history - you wouldn't yourself spout such idiotic Anti-semitic nonsense that everything is part of some vast Jewish conspiracy, no?

Poor woman, poor poor dear young woman. She only wished to help and end up dead. Just another example from the religion of peace which is so good at murdering, raping and beating girls and women. What a great and merciful allah that mohammed made up and put himself as second in command. So where is this allah? Oh, in the side of Mohamm's mouth when he did that fake voice pretending that people couldn't see him doing it, like a bad ventriloquist.

Ms. Mueller's hand written letter never mentions Christ. I think that is why President Obama could parade her letter and family for the world to see.

Every Muslim must read Surah Al Afqaf 46:9 Allah SWT orders Muhmmad to Say: I am no new thing among the messengers (of Allah), nor know I what will be done with me or with you. I do but follow that which is inspired in me, and I am but a plain warner.

Muhammad admits the fact that (1) He is no prodigy amongst prophets, (2) He doesn't even know what is going to happen to him after death, (3) He also states clearly that he doesn't know what will happen to his followers, Muslims after their death, (4) He admits that he is nothing more than a warner.

Muslims you're following someone doesn't even know what will happen to himself let alone to you all. It's a case the blind leading the blind.

Recently I sat in a class where my lecturer (he was Muslim) was clearly up upset and having difficulty teaching. He explained that his cousin had been killed by the Muslim Brotherhood the day before. Someone said "I didn't read about that in the news" to which he answered the media could not physically report all the deaths of people killed daily in the name of Allah.

What you call a "load of crap" is the reality of thousands of innocent human beings on a daily basis. So if you want evidence that Islam commands death in certain cases, visit some of their grave yards, listen to the stories of those who've watched men reciting the Qur'an before ordering the execution of all non-Muslims.

Listen to the stories of people who are forced to kneel before masked and armed men while they recant their beliefs and swear allegiance to Allah or be killed on the spot. People forced to recite Quranic verses with the hot tip of a gun or the searing edge of a blade pressed against their flesh. Ask these people if they think that Islam sanctions these atrocities.

The only reason that you can sit and write so sarcastically and glibly on this blog is because you are removed from this reality. But I assure you Osama, your carefree goodwill Islam is only possible because you are not living in an Islamic country.

You also mistake the intentions of this web site. It is not to make empty accusations or to engage in endless semantics about words. This website and blog exists, as far as I can see, to break down the lies that propagate the ideologies that give men the right to issue in a religious kingdom through violence.

There are many groups like ISIS, they are not the first Islamic group to try and issue in Shari'a law through violence and, horrifically, they will not be the last. If we are to learn anything from Islamic history, ISIS will turn on itself and a new splinter group will form with a new determination and plan to bring the world under Shari'a law.

How and why when she is according to your belief in hell now?