The new issue of Charlie Hebdo will feature Muhammad on the cover: 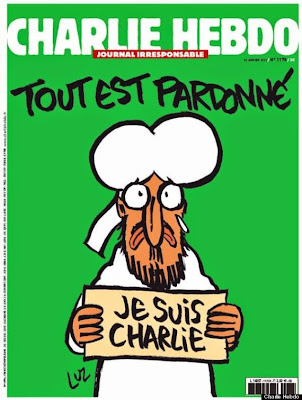 CNN—If the Charlie Hebdo attackers thought they could eliminate the magazine, they're about to be proven wrong a million times over.

Editors of the Paris-based satirical magazine released the cover of their next issue on Monday night, and it shows a cartoon of the Prophet Mohammed, holding up a sign with the now-famous slogan "Je Suis Charlie."

That slogan has become a rallying cry in the wake of the horrific shootings that left 12 dead at the magazine's offices last week.

The cover illustration also includes the words "Everything is forgiven."

The new cover was shared by Liberation, a French newspaper that lent office space to the surviving staff members of Charlie Hebdo.

Liberation's news story about the new cover said it was specifically meant to depict Mohammed.

Many major news organizations, including CNN, have refrained from showing any of the Charlie Hebdo cartoons that purport to show the prophet. Executives at CNN have cited concerns about the safety of staff members and sensitivity about Muslim audiences.

The issue of Charlie Hebdo is scheduled to be shipped to newsstands on Tuesday and put on sale on Wednesday. Resuming publication is a triumphant moment for the magazine, and one celebrated by journalists around the world. It is also a highly provocative moment -- as Monday's cover indicates.

Many Muslims find depictions of Mohammed to be deeply offensive, and there has been speculation that Wednesday's attackers were motivated in part by past Charlie Hedbo cartoons. (Continue Reading.)

holder and kerry should have been there. like Cnn cowards liberal bravado all year long when its time to man up they run away like well cowards

Donald Trump said the world is facing a Muslim problem. I hope he maintains his courage and his stand. And for this, I hope the next POTUS shares his courage as well. This is another brave cartoon. Bravo.

What a stupid cover! It indicates that Muhammed didn't approve of the killings and is sad and tearful for what has happened, what an absolute nonsense since Muhammed himself was pleased and approved the killing of his critics and sat the example and the ruling for other Muslims to follow! Muhammed should have been portrait as a terrorist himself who is personally responsible for these killings!

Dacritic..D.T will always stand his ground.. He does not care about this cancerous cult..

Forgive me for saying this but the Westerners ( excepts for you guys here !! ) will never learn.. this has been happening since the invention of toast bread.. and they still think islam is a religion of peace.. even now with what has happened in France ( May the Lord Jesus receive them and every soul to share in His glory, peace and love )..what has been done..??

Just a couple of " we condemn this acts of terrorism " worldwide but what has been really done to address the root of the problem - islam...NOTHING !!!

So brace yourself for more to come

Just hope somebody with some real guts in power would do another Angola..

I dont know....it could be?....but is the cartoon of muhammad's hat designed to look like a man's private part?.....with the emphasis on big ....b%##'s which illustrates muhammad as a aggressor and jerk?

@ immanual :
charlie hebdos knows that. So it will show that even with a"peaceful cartoon", muslims will be angry .

muhammad idolators all those muslims...

These cartoonists are the people with balls like our David Woods.

My respects to those who lost their life for us.

Immanuel says "What a stupid cover! It indicates that Muhammed didn't approve of the killings and is sad and tearful for what has happened,..."
Immanuel, remember this is satirical magazine. This could be a cryptic double edged message.

First showing moderates that Mohammed would not be pleased with what the jahidists did, which is an absolute lie .... But hey Muslims love believing in lies so let them.

Second and more importantly, this could very well be portraying Islam's eventual SUBMISSION to free speech, instead of us to fear.

Islam and it's evil minions have made no dent in our determination and resolve. Our hold on freedom has become even greater that will eventually force even hardline Muslims to accept freedom of expression.

Look at it this way, Mohammed is shown here crying from defeat rather than empathy.