Meanwhile, our leaders continue to praise and defend the religion that promotes such brutality. 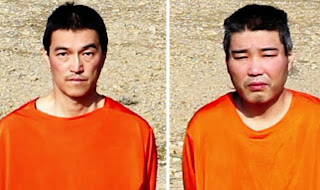 Tokyo (CNN)—Japan says it has had no contact with ISIS as the Islamic militant group's deadline nears for Tokyo to pay a $200 million ransom to spare the lives of two hostages.

Japanese officials have said they are doing their best to communicate with ISIS, which threatened in a video released Tuesday to kill two Japanese citizens it's holding within 72 hours if it doesn't receive the huge sum it's demanding.

But Japanese Chief Cabinet Secretary Yoshihide Suga said Thursday that Tokyo had so far heard nothing and doesn't know what situation the two hostages, Kenji Goto and Haruna Yukawa, are in.

Japan has said it would try reaching the ISIS captors through third parties, like governments in the region or local tribal leaders.

"We are aiming to save them as soon as possible," Suga said Thursday.

For more on Islam's view of non-Muslims, watch this:

If their government doesn't rescue them, I hope they come to Christ, who will have mercy on them. Let's pray.