France trains its soldiers in all the tactics necessary for modern warfare. Some of these soldiers then join ISIS and share what they've learned. If you're wondering why the Islamic State has been so successful, it's because they've had excellent training . . . by Western governments. 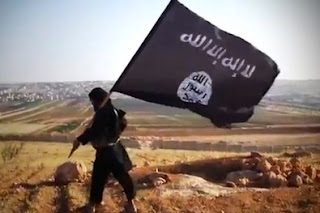 AFP—A dozen ex-French soldiers have joined jihadist groups in Iraq and Syria, raising concerns over the possible existence of radical elements within the military, a defence ministry source said Wednesday.

"We estimate at around a dozen the number of former troops who have joined these networks," the source, who wished to remain anonymous, said.

"Our concern is not former soldiers... It's preventing the phenomenon of radicalisation with our forces," the source added.

"The cases of former soldiers being tempted by jihadism are extremely rare," he told a press conference to announce new anti-terrorism measures in the wake of the recent attacks in Paris.

The army's biggest fear is that rogue soldiers could turn their weapons on their comrades or use their combat and explosives know-how to carry out attacks.

RFI radio reported that most of the soldiers-turned-jihadists, whose ranks included former special forces and Foreign Legion members, had joined the Islamic State group.

One was commanding a group of French recruits that he had trained in northeast Syria, the radio added.

"Others are explosives experts," RFI said, adding that the fighters were mostly in their twenties.

According to L'Opinion newspaper, one combatant had served in the elite 1st Marine Infantry Parachute Regiment. (Continue Reading.)

now replace American with French and you have the same problem:

"Can a good Muslim be a good American?

That question was forwarded to a person that worked in Saudi Arabia for 20 years.

The following is his forwarded reply:

Theologically - no. Because his allegiance is to Allah, the moon God of Arabia.

Religiously - no. Because no other religion is accepted by his Allah except Islam (Quran, 2:256)

Scripturally - no. Because his allegiance is to the five pillars of Islam and the Quran (Koran).

Geographically - no. Because his allegiance is to Mecca, to which he turns in prayer five times a day.

Socially - no. Because his allegiance to Islam forbids him to make friends with Christians or Jews. (Quran 5:51)

Politically - no. Because he must submit to the mullah (spiritual leaders), who teach annihilation of Israel and Destruction of America, the great Satan.

Domestically - no. Because he is instructed to marry four women and beat and scourge his wife when she disobeys him (Quran 4:34).

Intellectually - no. Because he cannot accept the American Constitution since it is based on Biblical principles and he believes the Bible to be corrupt.

Philosophically - no. Because Islam, Muhammad, and the Quran do not allow freedom of religion and expression. Democracy and Islam cannot co-exist. Every Muslim government is either dictatorial or autocratic.

Spiritually - no. Because when we declare "one nation under God," the Christian's God is loving and kind, while Allah is NEVER referred to as heavenly father, nor is he ever called love in The Quran's 99 excellent names.

Therefore after much study and deliberation....perhaps we should be very suspicious of ALL MUSLIMS in this country. They obviously cannot be both "good" Muslims and good Americans. Call it what you wish....it's still the truth."

Seems the sensible thing for any Western Government would be to do background checks and refrain from allowing any muslim man or woman into our Forces. Most ordinary people know this on the streets, they also know we should kick most muslim out of our countries so why don't those in power who are supposed to be intelligent know this?
I suspect they do but once in power become so corrupt they can be bought and betrayal to their own people comes easy which makes them even lower than the those trying to kill us.