Let's pretend, for a moment, that Islam has nothing to do with Islam. We're still left with the fact that millions of Muslims, from around the world, believe that it calls for terrorism. How do we correct such a misunderstanding? The plan of our leaders and the media (namely, keep saying that Islam is peaceful) isn't working at all. Indeed, terrorism is increasing. Since there are no other plans on the table, I guess we're just supposed to learn to live with daily terrorist attacks. Anything less would be bigoted and intolerant. 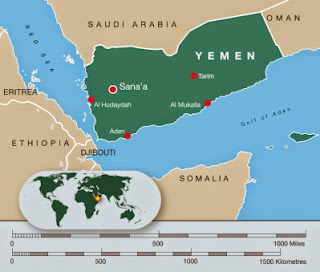 BBC—At least 25 people, among them 15 children, have been killed in twin car bomb attack in the central Yemeni province of Bayda, reports say.

The children were inside a school bus that was passing a checkpoint manned by Shia Houthi rebels in the Radaa area when the first bomb exploded.

The second one went off soon afterwards near the home of a Houthi leader.

The rebels blamed Sunni jihadist militants from al-Qaeda in the Arabian Peninsula (AQAP) for the blasts.

They have been fighting in Radaa since the Houthis overran the AQAP stronghold in October, a month after taking control of the capital, Sanaa.

It is not clear if the school bus or the Houthi checkpoint was the intended target of the first car bombing.

The Associated Press news agency quoted the Houthis as saying the victims were all girls who had attended a local primary school. (Continue Reading.)

It seems we are to just consider it a fact of life that some will die as they advance. It doesn't seem as they will have much resistance here as long as they don't disarm folks. I will keep using my double edged sword and my most powerful weapon "prayer" keep up the work David. I will do what I can in !y little corner of the world.

Bottom line of word of True God, God of Abraham, Isaac, Jacob and Father of Jesus Christ, according to scripture, is trustworthy, faithful, kind, love; slow in anger, righteous and equal justice to all mankind. But Muhammad’s Allah in Quran is unjust to non-Muslims, unkind, biased, hateful, quick in anger, blood thirsty, etc. etc.

Thus Allah’s word in Quran is not words from True God who created all living, non-living, seen and unseen matter including us. It is words of Muhammad, created out of Muhammad’s own intelligent and wisdom. Today’s terrorisms killing children in Pakistan, Nigeria, Yemen etc. proves this believes that words in Quran are from DEVILS, not from true God.

Believing that word of Quran is not words from True God could change terrorism. Believe it or not.

140 children were killed today in Pakistan by Taliban in an attack on a school. They didn't take any hostages but simply shouted "Allah hu akbar"and started shooting everyone . And that still don't have anything to do with Islam.. people are still posting on Facebook about how peaceful Islam is and Taliban have nothing to do with Islam when on the other hand all Taliban want is Islamic sharia.

May the Muslims eyes be open to the saving and redeeming grace of our Lord and savior Jesus Christ.

Our God is loving enough and doesn't need us to kill people for Him but to co-work with Him in spreading His message of eternal life through Jesus Christ.

Apparently the Jihadi that attacked the school in Pakistan where under orders to only kill students from 9 years and up. The reason for the attack on the school is because the Muslims of Pakistan in collusion with the USA have been killing the children of the Muslims of the Taliban.

Lets put this in historical context. Between 600 to 900 male Jews who had reached the age of puberty, where beheaded by Mohamed and his merry band of followers. The reason is because some Jews had allegedly betrayed Mohamed to the Pagans in a plot that never came to fruition.

This act of muslim lunatics will unite the factions in Pakistan. First news is the re-establishment of the death penalty for terrorism, followed by a statement to eradicate all terrorists.

The idiot Taliban has sealed its own fate- death to every last one of them.