A few months ago, while politicians and the media were busy assuring us that ISIS has nothing to do with Islam, I posted a video discussing some of the main Qur'an verses that support the actions of ISIS. Apparently, the video was so accurate that Sydney terrorist Sheikh Man Haron Monis tweeted it a month before his attack. Here's a screen shot of his tweet: 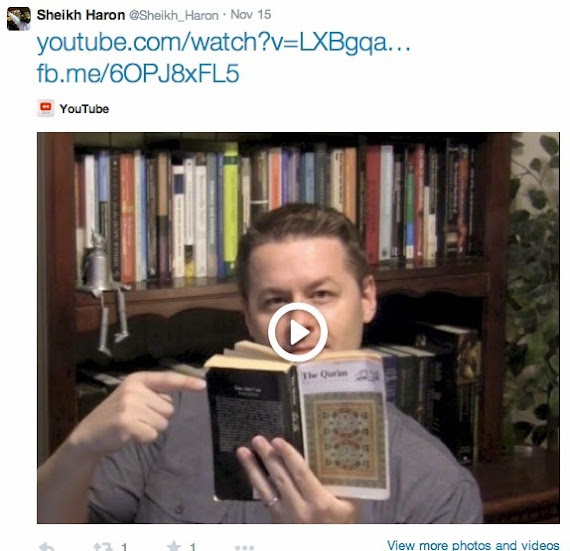 Why would Sheikh Haron, who despised non-Muslims (especially critics of Islam), promote my video? Because he wanted to show people how obvious it is that the Qur'an supports an ISIS-style theocracy. Sheikh Haron and I read the same sources, and we came to the same conclusions about what Allah commands.

For those who missed it, here's the video:

Latest terrorists actions in Pakistan like Sydney copy shop Islamic terrorism, where 141 mostly children were killed by Pakistani Islamic party Taliban, proves how brutal Muhammad, his Allah and his book Quran could be to inspire its followers to kill children. Five billion non-Muslims in the World who are conscience for righteous and justice should raise their voice to ban Quran unless Quran is changed to propagate Justice and Peace for all.

Shame on Muslims in Pakistan, no Muslim mullahs in Pakistan brought out procession on the street to kill Pakistani Taliban who has been killing innocent people by inspiration from their book Quran.

WOW thats crazy. I hope you don't get put on a list now or on bumped up on the lists your already on or put on additional lists.

I hope you don't get a visit from the men who have no name.

Now, I will bet that someone will try to use this against you to make a claim that you somehow inspired him. I wouldn't put that pass some of our more diabolical netizens

Hey David, Malaysia's top English daily has this report on their website today:

Being an ex employee of this newspaper, I know they are politically linked to the ruling parties of the country and are therefore..."obligated" to not criticise Islam.

Well, what better way to address this than to send them this particular post of yours!

I have been trying for months to get them to wake up to the real face (and threats!) of Islam. But there is no better testimony than the testimony of a terrorist I suppose. This is probably the closest we can get to getting a "radical" Muslim to answer a "moderate" about which is the real Islam, and a "testimony" like this from an "extremist" Muslim is what I see so far as the most effective way to get people to understand the reason for the disease that is Islam, instead of just continuing to be politically correct and pussyfooting around the real issue like what our media is doing.

David,
Now there is a good chance that the "blame game" will begin against you, the same way that Robert Spencer was blamed for Anders Brevik's actions ....
Every one and their dog is to blame except the real culprit, Islam, for fear of offending the sensitivities of our dear 1.5 billion Muslims.

Osama, my friend was at the World Trade Center and experienced it first hand. My husband was on the phone with him as the incident was unfolding. Take your vile comments and remove yourself from this website. I've had enough of your verbal diarrhea.

“The only peace and tolerance Islam delivered is to the dead!”

Islam wants and uses modern conveyances such as medicine, electricity, internal combustion engines, WiFi and the internet as long as it serves the Islamic leadership, how can they quote the Qur'an when Allan has never ever foretold or made any form of allowances for these conveyances of modern life to be used by Muslims?

Let the Muslims Martyr themselves, no capacious loss, the vast overwhelming majority of civilized peoples of this earth would not throw their lives away for a paradise which was dreamed up by a syphilitic barbaric sexual predator warlord pedophile!

I can not and do not understand how the Islamic cretins are continually allowed to rewrite modern history about their peaceful and tolerant nature!

Osama,
Islam is dying a slow painful death all over the world. Every time Muslim emulates Mohammed and murders innocent people, it enlightens more people around the world of how evil the ideology of Islam really is.

It will be the Muslim's actions around the world that will eventually condemn Islam to the dustbin of history. I hope I live to see that day.

That is some amazing and crazy sh|t.

Osama knows who the secret Jews are.

You're doing a brilliant job Osama.

Does Osama really believe his ramblings concerning jew involvement in everything and 9/11 being fake bolster the validity of his apologia for mohammed? Surely nonsense like this discredits anything the guy says. I wonder if he is allowed to post on here because he has become the cheap entertainment?

Osama is going with the typical Islamic response. "When in doubt, blame the jews"

I watched your ISIS debate and it was nothing but but idiotic conspiracy theories and blaming jews.

Do you really expect us to believe Abu Bakr Al-Baghdadi is secretly a jew, and he tricked the thousands of muslims around the world to join the Islamic State and the thousands that support him. Not to mention all of the other Islamic terrorist groups pledging allegiance to him.

Thanks for opening our eyes to whats really going on in the world. All of these terrorists are secretly jews and they follow the Quran, kill in the name of Allah all in an attempt to make islam look bad. Guess what! we know what the Quran and Ahadeeth say and have come to the same conclusion as all these terrorists (kill the Kuffar). Stop lying to us and to yourself its pretty pathetic.

PS. This is the third time I am asking you Osama, what was Muhammad's prophecy????

Osama Abdallah...Do you go to bed early just to wake up and be an idiot ? I mean I have never in all my life seen or heard of an idiot like you.. In my country Malaysia..the ruling government, muslim ngo's and past prime ministers are and still is known to be idiot but you take it all to a brand new level..you are so damn annoying with your stupidity, I feel like comin over to the USA just to punch you and then fly back.

I mean for the love of dear God..how low and dumb can any human being be ? Are you even human in the first place to begin with? Is this what islam does to a human being ? This explains a lot about islam's ideology and worldview. I have not found one muslim ( maybe Maajid Nawaz is an exception to this ) I have seen dogs and pigs with better behavior sense than you.

Even Khadijah was not a muslim..so please tell me the beginning of islam

Osama knows who the secret Jews are.

You're doing a brilliant job Osama.

I rarely read comments that make me tip over in laughter, so kudos to gabriella oak for offering the best response to Osama's unhinged, feeble defense of his murderous Ummah.

Hey Davy, how you doing? Now that we've mentioned Khadija, I'd like to share something interesting about her too, and I think it's pretty funny. The Sirat Rasul Allah said that Khadija was the first to believe in Allah and his apostle, but actually I think it's the other way round. Islamic sources told us that when Muhammad first received his er..."revelation", he thought he was possessed by a demon and became suicidal. Then he ran back to Khadija and asked her to wrap him up, crying that he feared he was possessed. Then Khadija said Allah would not do this to him and that he is Allah's prophet.

Hmm...how would she know I wonder?

And the whole irony is...Muhammad's own first suspicions about his condition could be right the first time.

David Wood you are radicalizing muslims by accurately quoting muslim sources!!! SHAME ON YOU!!! lol

Just watching the ISIS debate - it was quite unfortunate that Osama brought conspiracy theories to an academic setting. "Blame it on the Jews" was his motto.

David, great job pointing out the consistency between the hatred of Jews by Mohammed with Osamas own personal hatred for them.

Dave, translation/edition of the quran are holding?

Hey david , not able to see your video .. It seems youtube has removed , can you put your video in other channels like telegram or drive , where one can watch them and share links with others as well