I wonder how many terrorist attacks we'll have to go through before our leaders and the media finally start to wonder if they have something to do with Allah's commands to terrorize us. 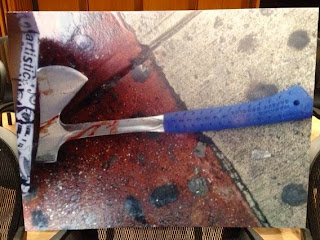 Fox News—The suspect in the Oct. 23 hatchet attack on two New York City cops had been searching online for jihadist propaganda and foreign terror organizations—as well as information on martyrdom and suicide bombings—in the weeks leading up to the assault, according to a city counterterrorism bureau intelligence assessment obtained by Fox News.

While initial reporting from unnamed sources suggested Zale Thompson may have been motivated by anti-government or black power sentiments, the four-page document provides new details that speak to Thompson's self-radicalization. They show his online obsession with the "message" of terror groups like Al Qaeda and the Islamic State.

The intelligence assessment, further, said he "may have held a long-standing interest in violent jihad."

"A preliminary analysis by the NYPD of approximately 277 online search terms by Zale Thompson in the weeks leading up to the attack revealed multiple references to 'jihadist' materials," the assessment states. "Thompson used internet search engines to query specific terms including but not limited to 'lone wolf,' 'jihad,' and 'jihad against the police'."

The investigation is ongoing, and the report says "there is no evidence that Thompson conspired with other individuals to carry out the attack"—but it adds that his Internet searches were focused on known terrorist groups such as Al Qaeda, its affiliate in Somalia known as al-Shabaab, and the Islamic State. It also documents 58 search terms from Thompson's electronic records that range from "jihad against the infidels" to "fatwa against americans" to "death to America in Arabic." (Continue Reading.)

You mean Israeli CIA and Mossad agent, Zale Thompson. Even from his name you can tell he's Jewish. And from the video that they displayed, he looked like he was attacking the wall. Pay attention to the pedestrian girl that saw him and ignored him by continuing to walk normal. If this was truly an attack on 4 police officers, then the reaction would've been far different. No humans other than the CIA agent and the pedestrian were shown in the video. The police officers were not shown.

PS- I'd love for these examples to be brought up during our upcoming debate on ISIS on December 6th.

Osama... I have watched ALL your debates, I have read your comments both here and on your website, I have read your responses ( which was never by the way ) in regards to islam, I have seen your intelligence ( ??!! ) and I just want to say here - Thank You.

Thank you sir so very much.

PS - I wouldn't be that excited if I was you to be goin up against a man like Professor Doctor David Wood. He is a follower and believer of a Man and God who has Honesty, Integrity, Discipline, Humility, Self Control ( which means in all matters related to pleasure and indulgence ) and most importantly Love and Forgiveness.

PPS - So you can tell what race anyone is just by their name? How about me?

Osama are you serious? Thompson is a jewish name now? CIA behind it? another 9/11? you do realise that you sound like a tinfoil hat conspiracy theorist, right? this is what islam does to people. it warps their minds to the point where they can't even think straight. what's next, reptilians?

Osama Abdallah, In case Allah calls upon you from a night vision to pursue full-time apologetics, just promise me not to quit your day job.

could it be the Ax attacker read these verses into his head:
Qur’an 48:29—Muhammad is the Messenger of Allah, and those who are with him are severe against disbelievers, and merciful among themselves
Quran 8:12 Sahih International: [Remember] when your Lord inspired to the angels, "I am with you, so strengthen those who have believed. I will cast terror into the hearts of those who disbelieved, so strike [them] upon the necks and strike from them every fingertip."
Qur’an 9:123—O you who believe! fight those of the unbelievers who are near to you and let them find in you hardness.

@Osama are you a convert to Islam or were you born a Muslim?

Zale is a Jewish name: http://en.wikipedia.org/wiki/Zale_Newman.

And for those who mock, youtube "Another 9/11" and see what your zionist lords have said.

Christians never cease to amaze me on how quick they're willing to even sell their own for the service of Israel, satan's capital and headquarter today. You had been zionised and had been lied to. The land that you call "Israel" is holy, but the government and people of today in it aren't. Even the Bible says that satan will camp between MOUNT ZION AND THE MEDITERRANEAN SEA. That's exactly Israel today without the Palestinian West Bank. Read the following to remove your ridiculous ignorance:

The Bible defines Mount Zion as Jerusalem. So satan's settlement between Jerusalem and the Medeterranean sea is precisely Israel today! It is so accurate that it even excluded the Palestinian West Bank.

@The Tru North, born Muslim :). But I studied the Bible probably more than I did study Islam. hehehehhe

osama, a person's first name is not indicative of his ancestry. It's the surname that shows ancestry. Take the name "david wood" for example. The name david is of hebrew origin, yet it doesn't mean that david wood is jewish. Most westerners, and muslims, today have first names derived from hebrew. Now, if a person has a last name of "newman", then yes, it's probable that he's a jew. But this guy's last name is thompson, for god's sake.

Osama..the only thing missing that can match your stupidity is background music.

You are living proof manure can sprout legs, walk and talk.

I can only guess that he's drawing a bizarre parallel of the word Zion and Zale with the one letter. It must mean the spirit of Zion..yeah. Everything is a zionist conspiracy.. EVERYTHING.

We're typing these exchanges on the internet where a simple search reveals that Zale is a Greek name. Let's just ignore that.

@Osama that made me laugh, thank you for that. When you were studying the Bible did you look at objectively or (I don't mean disrespect by this) did you keep your Islamic glasses while studying...because if you did then you wasted your time LOL. You should study the Bible objectively...then you will get some where. I pray that Jesus Christ softens your heart so that you may learn what He teaches Amen.

Are you actually a wildly brilliant performance artist deep into your masterpiece and life's work of an ingeniously exaggerated caricature of a Muslim apologist?

If not, the only other conclusion is that you are in fact an idiot.

Every time a Muslim apologist opens their mouth it's a crime scene.

If this post is an example of what we can expect in the debate to come you're going to end up with blistered tongue licking your wounds.

@Bill Moser and the other Zionists on this board,

If you were destined to die from murder in the USA, then you are most likely to die from:

1- A cold-blooded and mentally-disturbed and depraved white psycho who will not only kill you, but even cannibalize you if he gets the opportunity.

2- A gang banging thug nigga from either the blacks or latinos in any of the US major cities or its slums.

3- A drunk driver kamikazeing you.

Think about that before you and the empty Zionists here decide to vomit your next hateful post.

And for point #2, he'd probably be listening to the following rap line:

This probably would be the coolest death for you :). LOOOLLLLLLLL.

In other words, MUZLEMS should be the absolute least of your worries.