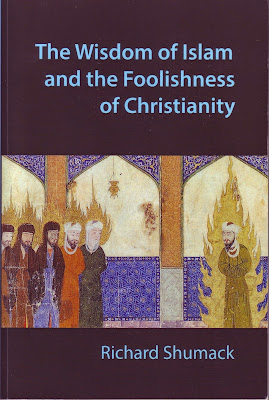 I wish to recommend this book to all those involved in Christian-Muslim dialogue. It is written by the Australian author Richard Shumack who has had many years of ministry in this area. I am recommending this book because Richard engages with Islam in a way that many of us do not, that is philosophically.

I suspect for many of us, myself included, we have engaged with Islam in terms of the texts of Islam, that is, the Qur'an and Hadith, and this is indeed one of our strengths. However, Muslims take much pride in Islam being a deeply rational and reasonable faith - and they see Christianity as irrational. To engage with Islam we also need to address this rational aspect and this is done philosophically.

Richard Shumack's book does this philosophical engagement. Some of the areas he covers are:

For each of these areas the common Islamic philosophical understanding is explained and critiqued. This was great for learning the history of Islamic philosophy and was also very practical. Then the Christian position was defended philosophically. This book has already helped me in my dialogue with Muslims.

The only weakness I found in the book was that because it focused on philosophy, not texts, I felt there were some important texts that were not considered, however, as the aim of the book was a philosophical engagement this does not take away from the book's helpful contribution.

I recommend this book to all who want to extend their thinking in this area.

To my opinion Wisdom of Islam maintaining intact as religion as of to date is its imposing severe punishment strictly, for criticizing Islam’s corner stone the Quran and Muhammad.

We all know that truth won’t come out until its lid is open. Like Arabian folk story “Gene in a bottle”, truth about Islam, the Quran and Muhammad has been kept under lock and key above any criticism. Islam is one way traffic like mafia gang; accept Islam alive but leave in dead body, why??

Whereas Christ Jesus, son of God, corner stone of Christianity has been dissected to proof His claim as Son of God, since His ministry in Middle East more than two thousand years before till today and light never end.

Samuel, thanks for the recommendation.

Al-Nabia Isa correctly observed that loving those that love you is common:

Al-Nabia Isa also correctly observed that Allah loves *everybody*-- regardless of whether that person is a tremendous sinner or not:

Matthew 5:43-45:
You have heard that it has been said to,
'love your neighbor
and hate your enemy.'
But I say to you,
love your enemies,
and bless those that curse you,
and do that which is pleasing to those who hate you,
and pray for those that take you by force and persecute you,
so that you may be the sons of your Father who is in heaven,
He that raises shemsheh [His sun]
upon the taba [good]
and upon the bisha [evil],
and causes to descend metreh [His rain]
upon the kana [just]
and upon the aiola [unjust].

The conception of Allah that al-Nabia Isa spoke about is a much more credible and satisfying conception than what Islam portrays Allah to be like.

that is just speculation that muhammad is a descendant of Ismaell & Abraham, you cant find their Genealogy in the koran, actually like everything else about islam, it is "conjecture"!

Think, David Wood wrote an article that muhammmad's father is likely not his father, as he was born like much later after his father died!

Such posts are very useful and in demand in the modern world, thanks for this material, also there are many services that are easy and fast for you to complete writing assignments, go to https://edusson.com/apa-paper-writing-service, study this useful review on the highly-rated professional APA paper writing service, make an order and get quality material, saving more time.

Thank you all for your advice! I am already writing dessert, but the parallel work prevents me from focusing on its quality - I need to analyze a lot of sources. Therefore, I use phd dissertation writing services, and am already satisfied with the result - very high quality written work, done by real professionals. I'm sure the score will be high