We'll need to wait for an investigation to get accurate details, but several news sources are identifying the Canadian Parliament shooter as Michael Zehaf-Bibeau, a Canadian convert to Islam. An Islamic State Twitter page released a photo, which supposedly shows Zehaf-Bibeau in jihadist attire. 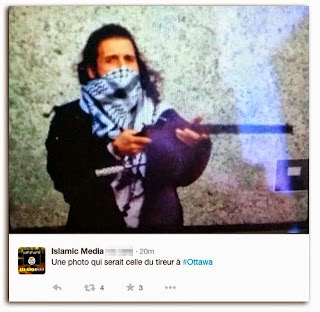 Daily Mail—A gunman shot dead a Canadian soldier at the National War Memorial in Ottawa today before exchanging dozens of shots with guards inside Parliament in a terrifying attack that left the nation's capital on lockdown.

Zehaf-Bibeau then ran inside the Parliament, where he opened fire before he was shot dead by the House of Commons Sergeant-at-Arms.

Zehaf-Bibeau was born in Quebec as Michael Joseph Hall but recently converted to Islam,CBS reported. His attack comes just two days after another Canadian soldier was killed in Quebec by a man with jihadist sympathies.

Authorities initially said they believed 'two or three' gunmen were responsible for the attack in Ottawa on Wednesday, but at an afternoon press conference, Chief of Police Charles Bordeleau would not confirm whether or not they are still searching for other shooters. (Continue Reading.)

For an introduction to jihad, watch this:

Been following the story all day. From the get go I thought that it smelled of Islam. Our PM is going to address Canadians this evening.

Here are some of my thoughts I posted on Facebook.

We need to ask ourselves are "we in a war with Islam?". My answer is yes we are. We may not realize that we are in a war but in war that is just as real as the war we were in during World War 2. But this war is not like any of the wars we have fought before. This war is a war of a civilized [despite it shortcoming] against barbarians who not be satisfied until they have destroyed our way of life.

What we fail to understand
is this is more than a war of ideologies but is a religious war. Until we come to that understanding we be continually be on the defensive.

Islam is waging an aggressive war against us. They are winning because we are no longer a Christian society. We need to return to our Christian values in our homes, schools, business and in government, If we do not we are lost. The secular humanist have not a hope in hell of defeating the ideology of Islam.

Dare I say we may need to another crusade to defeat the scourge of Islam.

I would like to see the alleged body of the dead soldier. All we saw on TV was people scared and sounds of bullets being fired, perhaps empty bullets for this staged zionist lie.

We have nothing but noise and lies so far, especially that it is done by a "Muslim Convert". Man, this zionist stupidity is getting way too old.

I am more than willing to accept that this is a terrorist act done by a Muslim convert. But before I do, I need to see the evidence first. All I am seeing on TV is a circus!!

And how are these zionist liars now going to support their PROFILING OF MUSLIMS case?? :))). I mean LOOLLL, it seems to me now that David Wood and Athony Rogers and James White look more suspects in the airport than me!! :)))) I find that quite hilarious indeed.

Stephen Atkins, while I understand where you're coming from. You are essentially espousing and regurgitating what Dr. Samuel Huntington wrote about years ago. I understand the thesis, but it's too simplistic and black-and-white and unscientific, unemperical.

One, most of the victims of ISIS and ISIS sympathizers are in fact Muslims. The Kurds who are backed by the US are mostly Muslims. Thus, it's not simply about Islam against non-Muslims. And Islam cannot launch a war. It's a religion. Christianity cannot be at war with anyone. Both religions are too diverse, so linguistically it doesn't work. I know we used to have Christiandom, but that concept is antiquated. Adopting such language for 2014 is even more problematic.

In addition, the US chose to fight against secular, socialist groups rather than finding an entente with them in the 1980's and backed fanatical groups. So the only alternative was either brutal dictators or fanatical religious people. This was not completely an indigenous creation.

By the way, I have lived in that part of the world and many other countries on this planet, as well. I saw potential problems as far back as the early 1980's, so I am not a liberal ignoramus or "Muslim sympathizer". I seek to be empirical, and I am all for, and have been, for the monitoring of mosques.

Anyway, Bibeau-Zahaf should have been in prison. He had a long history as a criminal. Yet, the justice system allowed him to get out more than once.

Let's remember that thousands of Muslims have been massacred and killed by these fanatics. They are human beings just like you and me. This is more about cult-like groups who want to kill those who don't agree with their interpretation of religion. However, is it fair to label everyone who follows the faith that way? It's unscientific, unempirical to do so.

That said, let's help the Kurds and other reasonable groups to eliminate ISIS with all the Westerners who joined them as recruits.

The real tragedy about what happened in Canada is that it all could of been avoided. If only the Canadians would of let the terrorist immigrate to the IS that soldier would still be alive today.

"Sources told the Globe and Mail that Zehaf-Bibeau had been designated as a “high risk traveler” by the Canadian government and reported that his passport had been seized."

"I would like to see the alleged body of the dead soldier..."

Is it just me or does Osama sound like a serial killer on Criminal Minds that wants to see the dead bodies of his victims so he can relive the murder's and continue to get off on them.

Petition to the liar in chief:
Officially arm the People's Protection Unit (YPG) of Syria to defend ISIS from destroying the Kobane community
https://petitions.whitehouse.gov/petition/officially-arm-peoples-protection-unit-ypg-syria-defend-isis-destroying-kobane-community/MqkGM32Y

There is such a waste in this murder and subsequent shooting of Zehaf-Bibeau. There are many, many Canadians that are not happy with this government and their decisions regarding the middle east amongst other issues. The way to change things is to get them out of power. Organize your communities, you are not powerless.

[Basil Teacher]"And Islam cannot launch a war. It's a religion."

Adherents of a political ideology-- for example, communism, fascism, and Islamo-fascism-- can and have launched wars.

"Christianity cannot be at war with anyone."

2 Corinthians 10:3-5, New International Version (NIV)
https://www.biblegateway.com/passage/?search=2%20Corinthians%2010&version=NIV
For though we live in the world, we do not wage war as the world does.
The weapons we fight with are not the weapons of the world.
On the contrary, they have divine power to demolish strongholds.
We demolish arguments and every pretension that sets itself up against the knowledge of God,
and we take captive every thought to make it obedient to Christ.

2 Corinthians 10:3-5, John Wesley Etheridge (JWE) translation of the Aramaic Peshitt_o_, in the PDF of the Khabouris Codex at
http://www.dukhrana.com/khabouris/
For if we walk in the flesh, yet we war not according to the flesh.
For the armour of our warfare is not of the flesh, but of the
power of Aloha; and by it we cast down the strong-holds of rebels,
and demolish reasonings and every lofty thing that is exalted
against the knowledge of Aloha, and captivate all thoughts unto the
obedience of the Meshiha.

Leslie, you need a reminder that ISIS threats were made well before Harper gave the green light to involved our troops. So this tragedy would've happened regardless.

I'm not a fan of Harper, but the alternatives aren't exactly better. Unless you supported Trudeau's brilliant idea of possibly sending non-military help to Iraq.. basically fresh hostages for ISIS. Harper does seem like the lesser of two evils since a naive brat is the last thing we need in a leader.

Also, since many many bullets were fired inside the building, I also would like to see the bullet markings on the walls. None of this was shown. So far it is nothing but empty bullets and a Zionist lie. Also, the soldier's body I want to see, and THE BLOOD AT THE SCENE. Like Zionist agent Osama bin Laden's body, all we saw is nothing and empty assertions.

If they could stage the death of JFK live on TV, do you this joke will be hard for them. Hardly!

To Stephen Atkins, I would remove the Palestinian-looking pictures of yours brother. You never know, they might mistake you for a Muslim convert! LOOLLLLL. You never know, I might just decide to tell on you! LOL. JK :)

@Osama...with your constant talk of Zionist conspiracies, you sure do come across as someone with an inferiority complex. Time to let go and seek help with that Jew phobia.

I stand comments. Islam is a destructive ideology that is determined on world domination. ISIS is Islam and Islam is ISIS.

Who can be more Canadian than Michael Joseph? Are you sure he did this out of his love for Islam? He is a recent convert to Islam. He seems to be just an insane individual.

Wow Osama the Islam is really showing in you. Your all about seeing the dead bodies and the blood and the carnage. Seriously man your sounding like serial killer who wants to relive his kills by looking at pictures and video's.

It is a shame what happened. Thoughts go out to the victim and his family members. As a Canadian citizen, I hope security measures are taken to prevent or limit what happened.