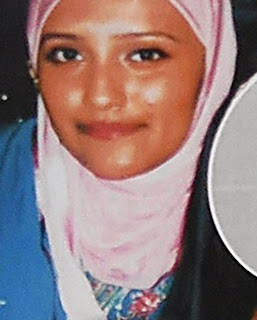 Glasgow, Scotland (CNN) — In November of last year, 19-year-old Aqsa Mahmood gave her father, Muzaffar, a long hug goodbye. He remembers, he says, because she looked especially beautiful. He remarked upon it to his wife, saying there was something different about his daughter.

The night before, she had asked her sisters to sleep together in one big bed. Aqsa gave a lingering farewell to her bedridden grandmother, and that's when Khalida, her mother, knew something was wrong.

Standing in her daughter's empty bedroom, Khalida told CNN, "There was something about the way she said 'Khuda Hafiz' (God's Blessings) while taking leave that day, which made us all wonder. My husband even asked if everything was OK, and I said she is fine."

Four days later, Aqsa called her parents back in Scotland, just as she was crossing into Syria from its border with Turkey. Her parents were left heartbroken and confused.

Her father says when he spoke to her about coming home, she said that she would see her family on Judgment Day and would like to be a martyr.

She has been prolific on social media, advocating ISIS and Islamic caliphate beliefs, and calling for attacks to be carried out in Western countries. She posts photos of AK-47s and exults in ISIS executions. Her recent posting online has called to follow the example set by "brothers from Woolwich, Texas, and Boston."

"There was nothing they (Aqsa's parents) could have done different. She was a bedroom radical. And if this could happen to Aqsa, who had all the life chances, the best education that money can buy, a family that was moderate, liberal ... if it could happen to her, somebody who was so intelligent, then it could happen to any family," Anwar said.

Aqsa is said to be influenced by watching sermons online and coming in contact with people through social media that helped her make the trek from Glasgow to Syria. (Continue Reading.)

It is important to realize all three are the victims.

This family live a few streets away from where I work, and I CERTAINLY don't want her to "come home". She's not fit to walk the same streets as me and mine.

Also, the lawyer speaking for the family is a chancer and very active politically. He and his equally dreadful wife took some poor woman to court a few years back, accusing her of screaming racist/Islamaphobic abuse at them over a dispute about a parking space.
If I remember correctly the judge didn't believe a word of it, fortunately.

I have little time for any of the players involved in this drama.

Hmm perhaps it is time for this family to read about this website, especially the latest video that David has posted on the ten verses. I just read the full news article. What I don't understand is, how full time, all-life Muslims, can still claim that Islam is peaceful. These people have been reading the Quran all their lives have they not? Do they not understand what is happening to their daughter? Then again, of course they don't.

She is delusional. She thinks that IS can defeat the Muslims that oppose them and then the entirety of the Western world, with all of our collective military forces. It must be a nice dream that helps her sleep at night, but realistically she knows that they stand no chance. From Saddam Hussain to Osama Bin Laden the West always triumphs. She should remember that.
A religion of peace does not behead human beings; whether they be innocent journalists or innocent girls who have 'disgraced' their family by not being able to fend off a rapist. This country will never be an Islamic state - thank goodness for our armed forces who protect the freedoms of a civilized country. Lets hope this delusional woman never comes 'home'.