President Obama Says Muhammad Was "Not a Real Man" 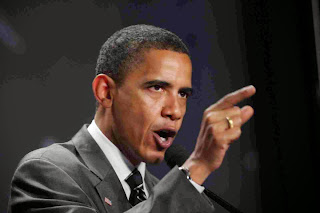 In a shocking instance of lucid thinking, President Barack Obama declared that the Qur'an is "contemptible," "uncivilized," and "unmanly." Okay, so he didn't say it directly. But by condemning Ray Rice for domestic abuse, President Obama has condemned the Qur'an and Muhammad. A recent press release declared:


The President is the father of two daughters. And like any American, he believes that domestic violence is contemptible and unacceptable in a civilized society. Hitting a woman is not something a real man does, and that’s true whether or not an act of violence happens in the public eye, or, far too often, behind closed doors. Stopping domestic violence is something that’s bigger than football – and all of us have a responsibility to put a stop to it. (Source)

How is this a condemnation of the Qur'an? In Surah 4, verse 34, Allah declares:


Men are in charge of women, because Allah hath made the one of them to excel the other, and because they spend of their property (for the support of women). So good women are the obedient, guarding in secret that which Allah hath guarded. As for those from whom ye fear rebellion, admonish them and banish them to beds apart, and scourge them. Then if they obey you, seek not a way against them. Lo! Allah is ever High, Exalted, Great.

Moreover, Muhammad himself, like Ray Rice, was known to hit women, as we can see in this excerpt from Sahih Muslim 2127:


... He (the Holy Prophet) entered the (house), and said: Why is it, O Aisha, that you are out of breath? I said: There is nothing. He said: Tell me or the Subtle and the Aware would inform me. I said: Messenger of Allah, may my father and mother be ransom for you, and then I told him (the whole story). He said: Was it the darkness (of your shadow) that I saw in front of me? I said: Yes. He struck me on the chest which caused me pain, and then said: Did you think that Allah and His Apostle would deal unjustly with you? ...

Because President Obama believes that "hitting a woman is not something a real man does," the president has just declared that Muhammad was not a "real man."

Fore more on women in Islam, watch this short introduction:

I think the Koran instructs men not to beat women too harshly. So it would have been okay if Rice didn't knock her out.

There is no reasoning in Islam, believe it, as it is said in Quran. Because of this, Quran was successful in making all Muslims promise by touching fire, air, water etc. that Quran is true and Mohammad is his messenger. As such there would be no question to be asked by Muslims. If asked, would be punished for blasphemies and if give up Islam would be killed, like a bandit give up gang. What a black magic Islam is! Five billion non-Muslims civilized people of the world were made impotence to do anything against Quran.

Unfortunately, the Qur'an says no such thing, Walter.

Wow! This is Providential. I was going to reach out to you today, David, for some references on violence against women. While getting some home school materials today for our study on the Rise of Islam / Byzantine Empire as this happens to be where we are in our march through history, I flipped through a young adult biography of Muhammad at our local library. In it was pure propaganda on several subjects, but the worst was how Muhammad elevated women, how women were treated better than they were in 20th century America, and how generous he was to marry so many poor widows. There was also references in glowing terms related to his marriage to Aisha without reference to her age. I know the children's librarian very well and told her, "We have a problem. This book is not historically accurate. Moreover, it is discussing child brides in a positive light. It also is whitewashing domestic violence. I don't know if you want to have it on your shelves." She was horrified when I told her the actual history and what the book said. They immediately pulled it off the shelf for review, had me fill out an objection form and list proof which I was only able to do from listening to Jesus or Muhammad / the debates, and will contact me for a full discussion why is it is objectionable. I now have some excellent talking points for this coming conversation with the Head Librarian. My recommendation to them was that they replace the book with a historically accurate one on the life of The Prophet or find one that skips this subject all together to at least not disseminate inaccurate information. Thanks so much for your ministry!! Without it, I would not have known the truth and many young ones would have been deceived.

Why on earth reporters do such videos?
http://youtu.be/FbWmBUONtFY
So, in summary women in islam can get beaten by their husbands. But, they want Americans to respect them.

Have mercy on us O Lord.
Grace & peace to everyone

What has Mr Obama got to say now!
This was right on point.Kudos to David once again.

Wow, McGuffey. I wish we have this where I am living. I suppose you're from Texas? Such openness! Without sounding patronizing, this is why I still think the US is the greatest country on Earth. If I did what you did with regards to books praising Muhammad in my local library, I think I'd be thrown in jail tomorrow, if not already killed first.

u just have the image no video!!!

ناقصات دين لايقضين الصلاة بعد الحيض و النفاس
You are a total idiot! You don't even know what you just said! read it in Arabic and then judge!!!!!!!!!