Sad that in this group of ten men carrying out a plan to murder a little girl, not one of them realized that Islam is a religion of peace and tolerance. 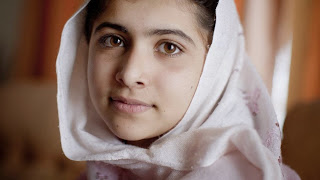 Pakistan—The Pakistani army said Friday it had arrested the gunmen who tried to kill schoolgirl campaigner Malala Yousafzai in the country's restive northwest in 2012.

The teenage activist was shot in the head by Taliban gunmen but recovered and went on to earn international plaudits for her fight for the right of all children to an education.

The detention of the 10 men, a joint operation involving army, police and intelligence agencies, came as part of the Pakistani military's ongoing offensive against the Tehreek-e-Taliban Pakistan (TTP) and other extremist outfits.

"The group involved in the attack on Malala Yousufzai has been arrested," Major General Asim Bajwa told a news conference.

He said the group was part of the TTP and the plan to kill Malala came from network's current leader Maulana Fazlullah.

After narrowly surviving the assassination bid, Malala was taken to Britain with her family for treatment, where she now lives. (Continue Reading.)

Finally some good news from Pakistan. Pakistani army is conducting a ground operation against Taliban since last couple of months. And for a change a few Muslims (especially the youth) is becoming tolerant towards Christians in Pakistan. So that's a start. Let's hope life gets better for Pakistani Christians, ameen.

It is too late, too little to serve justice in a civilized country.