Apparently, American leaders are desperate to pretend there is no terrorist threat in the United States, and they think they can ignore acts of terrorism by renaming them.

Let's see if we can figure out Nolen's motivation.

Nolen was "shouting Islamic phrases" (most likely "Allahu Akbar!" and "La Ilaha Illallah!") as he viciously stabbed his former co-workers:


Daily Mail—The Muslim convert who allegedly beheaded a female co-worker was shouting Islamic phrases as he tore across the store wielding a knife, it has been claimed.

Alton Alexander Nolen, 30, was trying to convince workers that Islam teaches that the punishment is acceptable on Thursday, shortly before he was fired from his job at Vaughan Foods in Moore, Oklahoma, according to local media.

He returned the same day and lashed out at colleagues Colleen Hufford and Traci Johnson with a knife, police said.

After being shot by sheriff's deputy Mark Vaughan, who is also the firm's CEO, in the wake of the horrific attack he has woken up in hospital and is being questioned by police.

And as the FBI investigates his alleged conversion to Islam in connection with the killing, reports have emerged that Nolen was shouting Islamic phrases during the rampage. (Source)

Nolen goes by the name "Jah'Keem Yisrael" on Facebook. His page contains a number of photos of him at his mosque and at Muslim events: 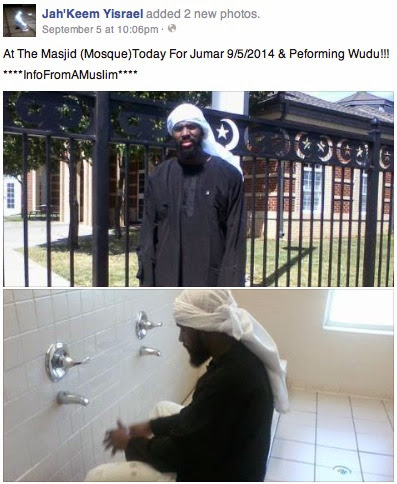 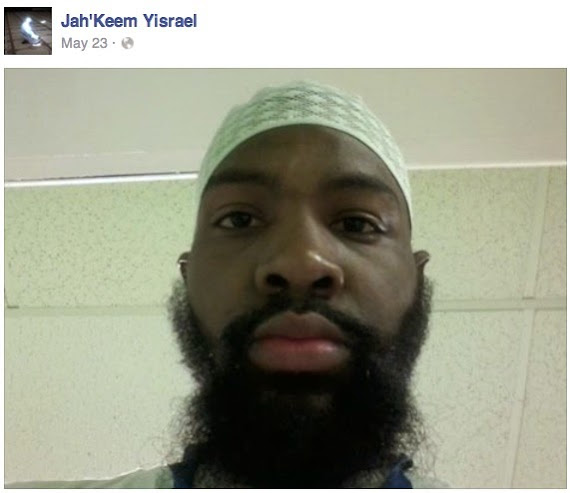 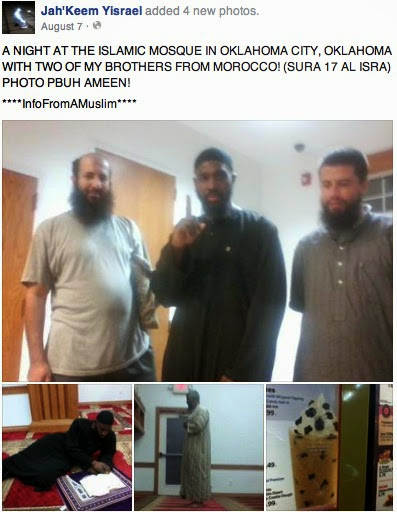 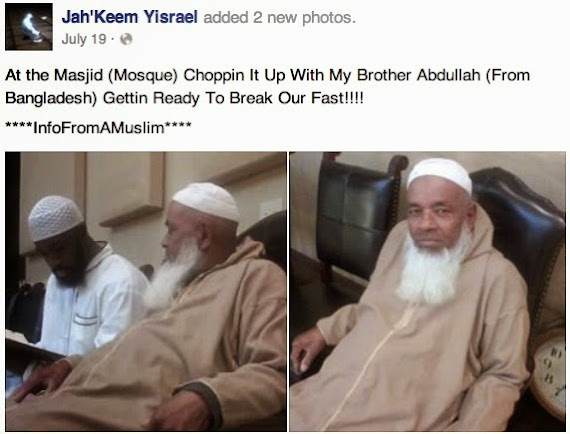 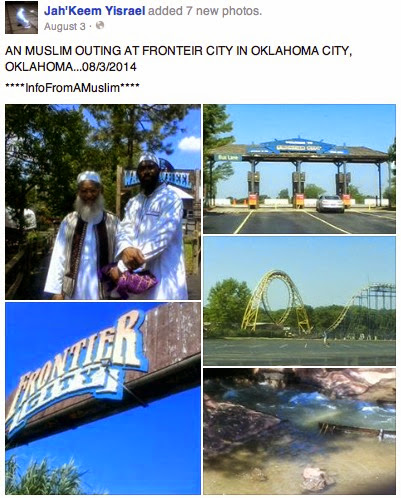 Nolen was a Muslim preacher, constantly calling people to Islam and telling Muslims to teach their children the fundamentals of Islam: 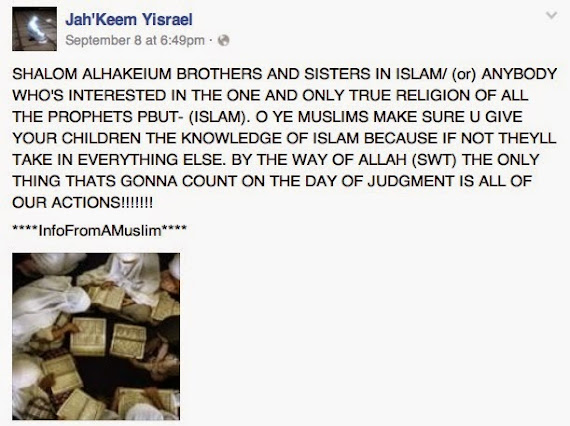 He even posted this picture of a young man he converted to Islam: 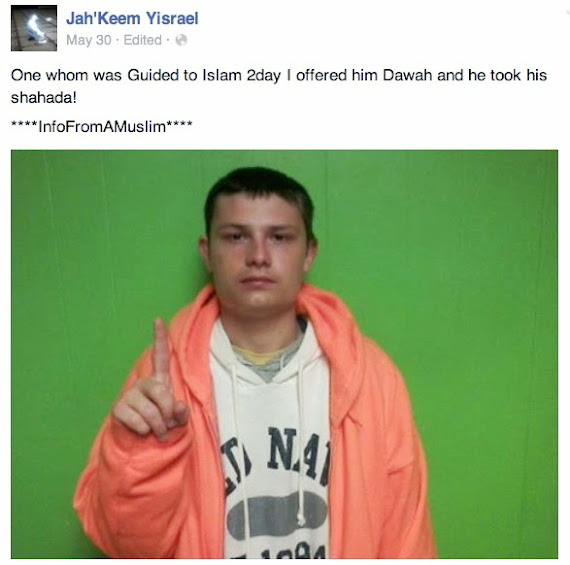 He warned his fellow Muslims not to pray for non-Muslim family members:

He also warned Muslims not to pay taxes to the U.S. government: 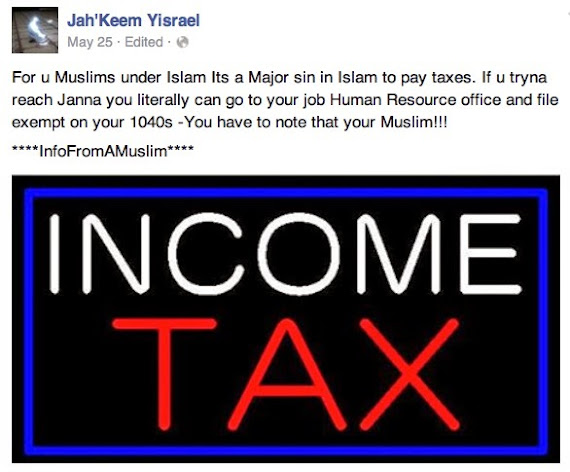 He despised both the United States and Israel: 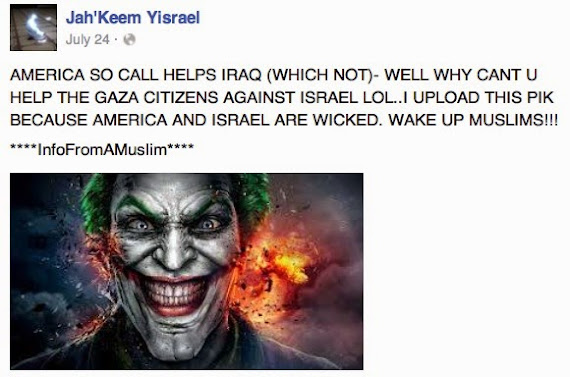 As for his jihadist tendencies, Nolen's cover photo speaks for itself:

He is a fan of Osama bin Laden: 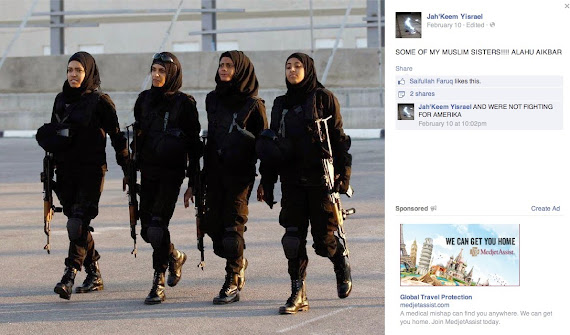 And children being trained as jihadists: 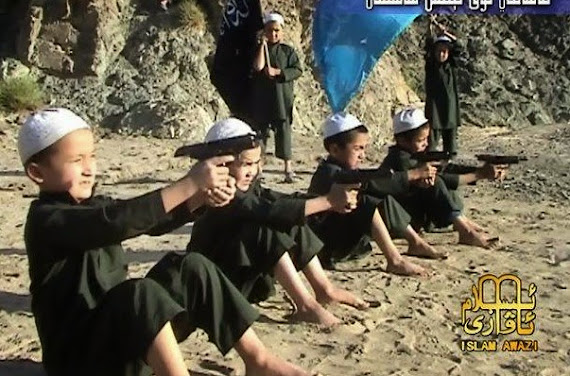 Beside a picture of Pope Benedict, Nolen declared that "Sharia is coming!": 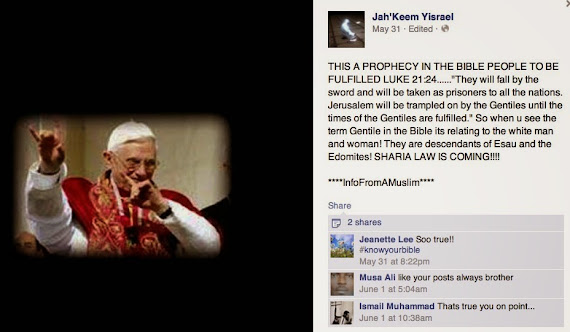 He also had a problem with women not dressing appropriately: 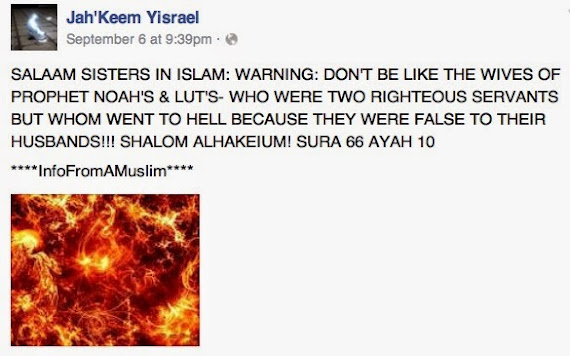 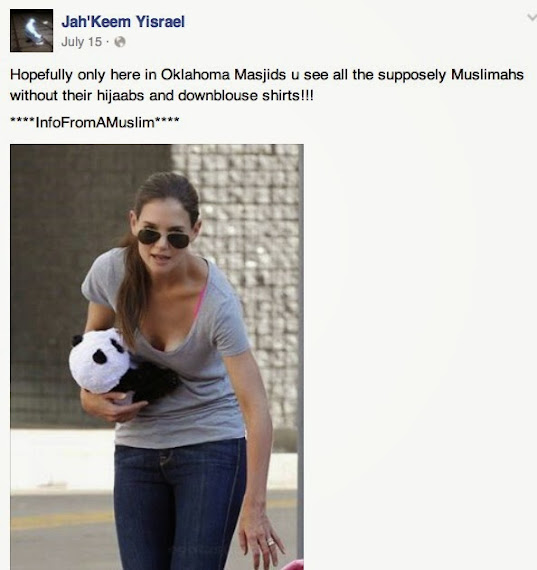 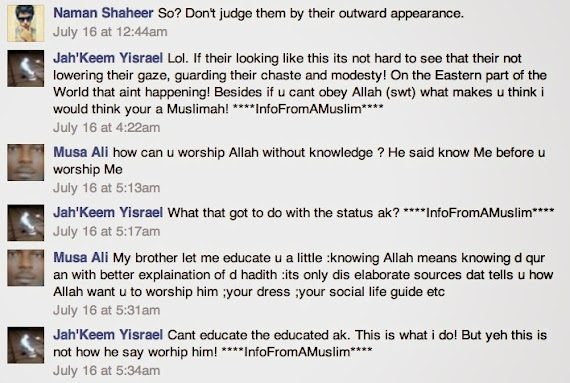 So, any idea what could have driven such a man to start killing infidels?

I watched the news about him this morning in CNN. Though they mentioned that he converted to Islam, they made it sound like he had some violence issues before and tried to distance his Islamic connection from the violence. But, you did a phenomenal job David in collecting all these pictures that clearly show that he soaked himself completely in Islamic ideology and sincerely believed that kaffirs are unworthy to live. I pray God that He blesses you and keeps you and use you mightily for His kingdom of light and love. Keep up the good work my brother.

Did anyone else notice the pictures of this man CNN posted didn't look anything like these pictures?

He wasn't long bearded, wearing islamic garb, he looked like a 'recent' convert.

Surah 9:113 - Muslims should not pray for Pagans for they are companions of the (hell) Fire.

Matthew 5:44 - Love your enemies and pray for those who persecute you.

We should show this to Barack Obama, and tell him how "holy" his Quran is.

I was just talking to someone about why Muslims can be so typically reasonable like every other human being in every other area of life, but become STUPID when Islam is being discussed openly, up to the point of being violent at the slightest factual exposition (they always call this "provocation"). Only animals react violently when provoked...actually even my dog doesn't bite or do anything unless seriously provoked. My friend nonchalantly said because they are blinded by the "evil spirit". Well, no other way to explain it right?

But people like Nabeel Qureshi are smart enough or BLESSED enough to be able to uncover this veil.

[Dacritic]"Muslims can be so typically reasonable like every other human being in every other area of life, but become STUPID when Islam is being discussed openly, up to the point of being violent at the slightest factual exposition"

If someone is insecure in his beliefs, that insecurity can easily lead to overreactions in the face of challenges to those beliefs.
If someone fears being murdered for abandoning a certain belief, that fear could be a large factor in overreacting to challenges to that belief.

If someone was spouting bible passages while decapitating that poor lady, you can bet your house that the media and authorities will say 'right wing christian'. They might even throw in 'extremist' if they were more discerning.

If someone is insecure in his beliefs, that insecurity can easily lead to overreactions in the face of challenges to those beliefs.
If someone fears being murdered for abandoning a certain belief, that fear could be a large factor in overreacting to challenges to that belief.

Haha, well said DF. And then they say you're inciting sensitivities.