Apparently, the world isn't going to care much until the entire Middle East is under the control of terrorists. 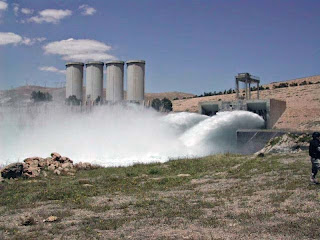 (Reuters) - Islamic State fighters seized control of Iraq's biggest dam, an oilfield and three more towns on Sunday after inflicting their first major defeat on Kurdish forces since sweeping across much of northern Iraq in June.

Capture of the electricity-generating Mosul Dam, after an offensive of barely 24 hours, could give the Sunni militants the ability to flood major Iraqi cities or withhold water from farms, raising the stakes in their bid to topple Prime Minister Nuri al-Maliki's Shi'ite-led government.

"The terrorist gangs of the Islamic State have taken control of Mosul Dam after the withdrawal of Kurdish forces without a fight," said Iraqi state television.

But a Kurdish official in Washington told Reuters the dam was still under the control of Kurdish "peshmerga" troops, although he said towns around the dam had fallen to Islamic State forces.

"The situation has taken a turn for the worse over the weekend," said Karwan Zebari, an official with the Kurdistan Regional Government's office in Washington.

He said peshmerga fighters were preparing for a "major offensive" Sunday night to take back control of towns near the dam.

The swift withdrawal of the peshmerga troops was an apparent severe blow to one of the few forces in Iraq that until now had stood firm against the Sunni Islamist fighters who aim to redraw the borders of the Middle East.

The Islamic State, which sees Iraq's majority Shi'ites as apostates who deserve to be killed, also seized three towns and the Ain Zalah oilfield, adding to four others already under its control that provide funding for operations.

Initially strong Kurdish resistance evaporated after the start of an offensive to take the town of Zumar. The Islamists then hoisted their black flags there, a ritual that has often preceded mass executions of their captured opponents and the imposition of an ideology even al Qaeda finds excessively harsh.

The group, which has declared a caliphate in parts of Iraq and Syria to rule over all Muslims, poses the biggest challenge to the stability of OPEC member Iraq since the fall of Saddam Hussein in 2003.

The U.S. State Department said in a statement that Washington was "actively monitoring" the situation in Iraq and was helping facilitate coordination between Iraq's military and Kurdish forces. (Continue Reading.)

Hey David, love your tweet on China on its way to becoming the world's most Christian nation! Among all the Islamic bad news here, that is one BIG piece of Christian good news! Any wonder why nations with Islamic-dominant governments do not...well, prosper?

oil has always been and will be a very big problem of social consumption, the big companies know it, the terrorists or extremist groups know that it is a source of profit to continue using funds to buy better weapons and this will always be a bigger problem, but while things like battery maintainer are delegated to better consumer retail until now we can not stop doing something to achieve peace