The Obama Administration has been supporting the rebels against the largely secular Assad regime all along. And now the rebels have begun stoning women. Will there come a day when our leaders finally realize what Islam teaches? 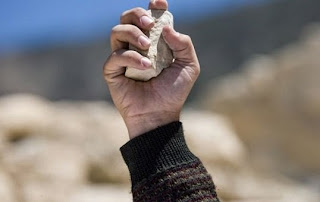 Syria—Fighters from Al-Qaeda-breakaway group the Islamic State have stoned a woman to death for adultery, in the first such execution of its kind in rebel-held northern Syria.

The stoning, first reported by the Syrian Observatory for Human Rights and confirmed to Al Jazeera by two activists, took place in a public square Thursday evening in the town of Tabaqa, Raqqa province. Activists said the woman was tried in an Islamic sharia court, but that witnesses to her alleged offense were never identified and that the man involved was not charged with any crime.

"Mystery surrounds the whole thing," said Abu Khalil, an activist in Raqqa who runs the anti-Islamic State group Raqqa is Being Slaughtered Silently, which obtained a cell phone photograph that purports to depict the incident.

In a tweet, the U.S. Embassy in Syria -- which no longer has a presence in the country -- condemned the "barbaric" stoning "in the strongest possible terms."

While far from the first instance of Islamic State brutality in Raqqa, the stoning has exacerbated fears the hardline group will govern brutally and without accountability across Syria and Iraq, where it led a coalition of Sunni forces to take over large swathes of the north and west in a lightning offensive last month.

Raqqa, where the Islamic State established its de facto capital last year, is widely considered a glimpse of what's to come in other regions that have fallen under IS control. (Continue Reading.)

Will there come a day......?
Yes, they must realise what islam teaches, it is not possible they are ignorant.
Which leads to another question....

Those who throw stones are at the same time condemning themselves, because they, being descendants of Adam, are also sinners (and have therefore added hypocrisy to their pile of sins), as their own conscience would tell them (John 8:9).

“He who is without sin among you, let him throw a stone at her first”

I remember some time ago Blah Blah Snow said that the Islamic system prevents adultery.

Where is the man who she committed adultery with?

For a long time I wondered why any sane woman would voluntarily convert to Islam (the question does not arise in the case of men, since Islam = a celebration of, and a license to practice, the basest instincts of the male human). Then suddenly the answer became clear to me: it's a form of mental illness. Any woman who converts to Islam should be examined for other signs of insanity such as severe depression, delusions and hearing of voices, and if necessary, committed to a psychiatric facility until such a time as they no longer present a threat to themselves and others.