A ten-year-old girl was brutally raped by a mullah (religious scholar) in a mosque in Pakistan. The community, of course, wants the girl dead, and her family has agreed to kill her to restore the family's "honor." Although a human rights group tried to protect the girl, Pakistani police have returned her to her family. Am I a racist for objecting to this insanity? 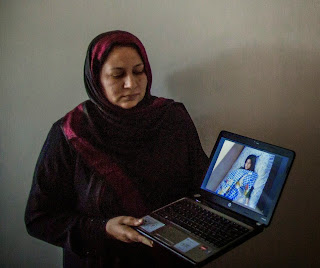 KUNDUZ, Afghanistan — It was bad enough that the alleged rape took place in the sanctity of a mosque, and that the accused man was a mullah who invoked the familiar defense that it had been consensual sex.

But the victim was only 10 years old. And there was more: The authorities said her family members openly planned to carry out an “honor killing” in the case — against the young girl. The mullah offered to marry his victim instead.

This past week, the awful matter became even worse. On Tuesday, local policemen removed the girl from the shelter that had given her refuge and returned her to her family, despite complaints from women’s activists that she was likely to be killed.

The case has broader repercussions. The head of the Women for Afghan Women shelter here where the girl took refuge, Dr. Hassina Sarwari, was at one point driven into hiding by death threats from the girl’s family and other mullahs, who sought to play down the crime by arguing the girl was much older than 10. One militia commander sent Dr. Sarwari threatening texts and an ultimatum to return the girl to her family. The doctor said she now wanted to flee Afghanistan.

The head of the women’s affairs office in Kunduz, Nederah Geyah, who actively campaigned to have the young girl protected from her family and the mullah prosecuted, resigned on May 21 and moved to another part of the country.

The case itself would just be an aberrant atrocity, except that the resulting support for the mullah, and for the girl’s family and its honor killing plans, have become emblematic of a broader failure to help Afghan women who have been victims of violence. . . .

The accused mullah, Mohammad Amin, was arrested and confessed to having sex with the girl after Quran recitation classes at the mosque on May 1, but claimed that he thought the girl was older and that she responded to his advances.

The girl’s own testimony, and medical evidence, supported a rape so violent that it caused a fistula, or a break in the wall between the vagina and rectum, according to the police and the official bill of indictment. She bled so profusely after the attack that she was at one point in danger of losing her life because of a delay in getting medical care.

After the two women’s officials began speaking out about the case, they started receiving threatening calls from mullahs — some of them Taliban, others on the government side — and from arbakai, or pro-government militiamen. One of their claims was that the girl was actually 17, and thus of marriageable age, not 10.

Photographs of the girl that Dr. Sarwari took in the hospital clearly show a pre-pubescent child, and the doctor said the girl weighed only 40 pounds. Few Afghans have birth records, and many do not know their precise ages. But the girl’s mother said she was 10, and a forensic examination in the hospital agreed, saying she had not yet started menstruating or developing secondary sexual characteristics. . . .

When Dr. Sarwari, who is a pediatrician, arrived to pick up the girl at the hospital, a crowd of village elders from Alti Gumbad, the girl’s home village on the outskirts of the city of Kunduz, were gathered outside the hospital; the girl’s brothers, father and uncle were among them. Inside, Dr. Sarwari encountered the girl’s aunt, who told her she had been ordered by her husband to sneak the girl out of the hospital and deliver her to the male relatives outside. “She said they wanted to take her and kill her, and dump her in the river,” Dr. Sarwari said.

Efforts to reach the girl’s relatives by telephone were unsuccessful, and insurgent activity around Alti Gumbad made the village too dangerous for journalists to visit. “The girl’s family gave us a guarantee that they would not harm her,” said Sayed Sarwar Hussaini, head of the Kunduz police criminal investigation division. “We would not hand her back unless we were sure.”

In the hospital room, the doctor found the girl’s mother holding her child’s hand, and both were weeping. “My daughter, may dust and soil protect you now,” Dr. Sarwari quoted the mother as saying. “We will make you a bed of dust and soil. We will send you to the cemetery where you will be safe.” (Continue Reading.)

This illustrates a fundamental distinction (of which there are many) between Christianity and Islam. Islam lacks a concept of sin. Rather, it has a concept of shame.

That's why we see this perverse logic of executing the victim. It doesn't see this as an issue of sin, or even a moral issue.

You know its got to be pretty bad in Pakistan if your refuge is to flee to Afghanistan.

In the Christian mindset; when one proves something in error or abhorrent...the usually response is that there is a joining of hands in truth.....but not so in Islamic culture and theology...no matter how erroneous and obviously evil the teaching or action may found to be....there is no acknowledgement or readdress or condemnation but yet worse an agreement in further deplorable deeds....but when people of void of Jesus, they only get filled up with wickedness....and the worse part of this is that to them....it is normal.

Now if you think about any democratic state, it is not really equipped to deal or confront Islam. For example, if in a society there are families of 10 Muslims and 10 Christians; the Muslim community is going to be larger because, 1 Christian family may consist of 4 people on an average. 1 Muslim family consists of 12 to 16 people because each family has one man three wives and their four children "on an AVERAGE". Keeping aside the forgiving attitude and opening of arms to a foreign enemy, who's only aim in life is to see the Christian convert to Islam or have them killed. When you measure it with democracy, Christians are on the losing side. Since democracy is based on vote based system the Muslims have a higher vote. Hence, exploiting Democracy to fulfill their radical religious views

Is 'honor killing' even an accurate translation? Seems to me, if they truly cared about honor, the father or a brother would kill the rapist instead and take the blame for the sake of the beloved daughter or sister. O.K, so private justice is not the most constructive way to deal with crime, but it seems so often in Islamic societies, with odds being stacked against women, that's the only kind of justice a female victim can hope for.

bloody rapist!
yet he wanted to marry her.
the rapist was just following orders as Quran states.

how is this religion of peace?

the demon of deception is really STRONG to deceive all muslims!

As a parent!, this is truly a heartbreaking article.. I can't imagine my daughter will encounter or worse may experience this very traumatic sexual abuse!!.. Well, in line of this article, just wanna share a safety management named Safekidzone? it can be downloaded through phones. This service has a lot of features, such as having a conference call to your safety network or escalate call to 911.. And I believe that this young girl could have been saved if she has this safety service, because also Safekidzone has an accurate GPS coordinates that would be sent to their system in times that the subscriber pressed the Panic Button.. Just click this link for your safety and your family as well.. http://safekidzone.com/a_aid=5328991a0b72c