If Jews in France and Great Britain went around destroying Muslim businesses and calling for the deaths of all Muslims, the world would be shocked. Why is no one shocked when the reverse happens? 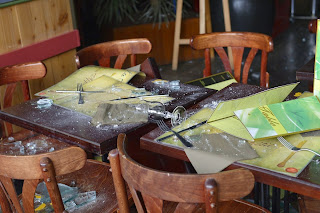 Huffington Post—Eighteen people were arrested for attacks on shops, including a kosher supermarket, a Jewish-owned chemist and a funeral home. Rioters, who carried batons and threw petrol bombs according to eyewitnesses, were yards from the synagogue when they were driven back by riot police who used tear gas.

“We called our town 'Little Jerusalem' because we felt at home here,” Laetitia, a longtime Sarcelles resident, told France 24. “We were safe, there were never any problems. And I just wasn't expecting anything like this. We are very shocked, really very shocked."

Roger Cuikerman, head of the Representative Council of Jewish Institutions in France told Radio France International: "They are not screaming, 'Death to the Israelis' on the streets of Paris. They are screaming, "Death to the Jews." The community was not just scared, but "anguished."

The government had banned a demonstration planned in Paris for Saturday, but posters were seen around the area which said “Come equipped with hammers, fire extinguishers and batons" and promised a "raid on the Jewish district”.

France has around half a million Jews, the biggest population in Europe, and around five million Muslims.

The Society for the Protection of the Jewish Community's figures suggest that anti-Jewish violence is seven times higher than in the 1990s, and 40% of racist violence is against Jews, despite them making up just 1% of the population.

In March 2012, a shooting spree by Mohammed Merah in the south of France left three French soldiers, three Jewish schoolchildren and a rabbi dead. The gunman claimed a connection to al Qaeda.

More than a thousand Jews have made aliyah (the term used when Jews immigrate to Israel) in the past 10 days, according to the Israeli government. (Continue Reading.)

Hi all, I have recently started reading this website and checking out some of the debates. I find them all very interesting. I think this latest article that David has posted is very scary and eye opening. I can't imagine what will happen when Christians on this earth will start to be persecuted just like this. If you read Revelations 20:4 perhaps you can put it all together. This is my guess...but I am thinking that the reason no one really is paying attention is that this is what is supposed to happen. There are a lot of other reasons I point this out. I did however have a question in regards to shirk. I do apologize that it is off topic, but my question is: if I as a Christian believe that Jesus Christ is the Son of God in the eyes of a Muslim have I committed shirk? And shirk is unforgivable in Islam Am I right about these two things so far? If so, say for instance later on in life for some reason or another I decide that I want to convert Islam will Allah forgive me of committing shirk while I was Christian and allow me to go to heaven when I die? Or does that sin no matter what I do stay with me for the rest of my life?

The too often reckless Israeli bombardment of Gaza is greatly increasing this hatred. These careless Israeli actions need to be condemned in the same way as vicious Muslim attacks upon innocent Jews.

Little do these pro Hamas/Gaza supports realize that they are support and contributing to their very own demise politically, culturally, and spiritually as free individuals, free thinkers, having free will, as this devastating wave of Ideology masked as religion consumes the very cultures they live within and revere!