While the world condemns Israel for trying to avoid being obliterated by jihadists, we see yet again what happens when jihadists conquer an area. ISIS just obliterated the ancient tomb of Jonah in Mosul, Iraq. 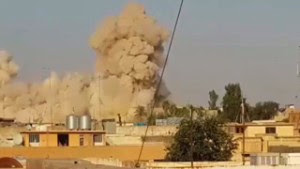 BAGHDAD (AP) — As Iraq selected a new president, Islamic militants blew up a revered Muslim shrine in Mosul traditionally said to be the burial place of the Prophet Jonah, several residents of the city told The Associated Press.

The militants first ordered everyone out of the Mosque of the Prophet Younis, or Jonah, then blew it up, the residents said, speaking on condition of anonymity for fear for their own safety. Several nearby houses were also damaged by the blast, they said.

The mosque was built on an archaeological site dating back to 8th century BC and is said to be the burial place of the prophet, who in stories from both the Bible and Quran is swallowed by a whale. It was renovated in the 1990′s under Iraq’s late dictator Saddam Hussein and until the June militant blitz, remained a popular destination for religious pilgrims from around the world.

Meanwhile, Iraqi lawmakers elected a veteran Kurdish politician on Thursday to replace long-serving Jalal Talabani as the country’s new president in the latest step toward forming a new government. But a series of attacks killed dozens of people, underscoring the overwhelming challenges facing the divided nation. (Continue Reading.)

They need to be stopped! If they succeed, their territory could be a safe haven for future islamic terrorist groups and only God knows what they would do then.I highly doubt that was actually his tomb to begin with and if it was, it's not like I was planning on going to see it anyways.

As history unfolds, it is easier to understand the wisdom and morality of God's commands to Israel to wipe out the nations when conquering the land on canaan. If such babarity was not dealt with at that time one wonders if salvation would have ever come into the world through the person of jesus the messiah. I am lost for words to see the wickedness of these muslim groups such as boko haram isis et al.

Blasphemy against all muslims, christians and jews. We are all one descendants of ibrahim those who change or alter anything from our holy book quran, bible, torah shall suffer the ultimate price. So dont worry God/Allah shall redeem us. These groups are only for world domination no right muslim commits these acts. The answer to are world problems is having faith in God and living in tranquility as brothers and sisters respecting one another without no borders or flags that represent us but as a world surrounded by love and respect to our fellow man think of our children it isnt fair to them. All radicals and fanatics must be destroyed. One love and God bless to all.